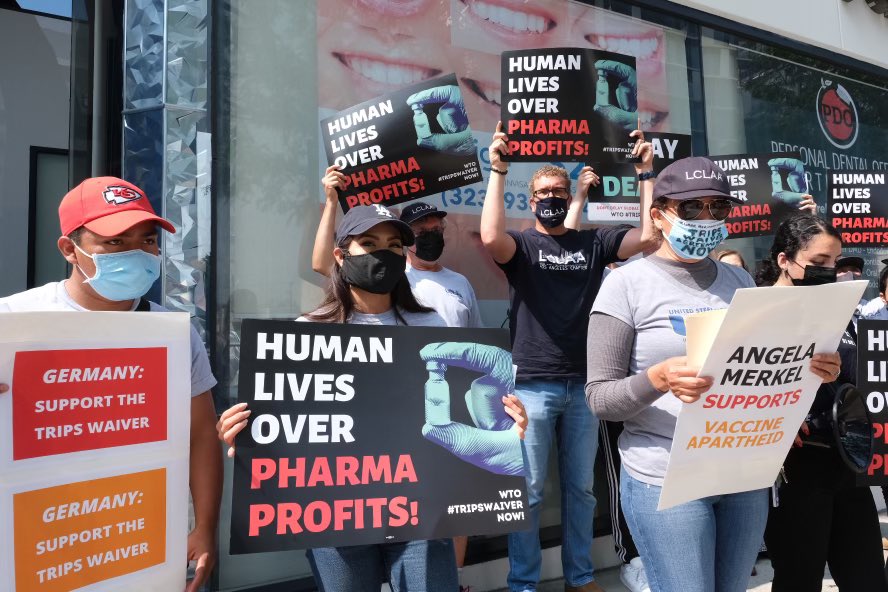 In early May, after facing months of grassroots pressure, the Biden administration announced that it would support waiving intellectual property rights for COVID vaccines. While that decision was celebrated as a significant movement victory, what’s actually needed now is the complete abolition of the intellectual property enforcement mechanisms that have led to the current nightmare scenario, where only wealthy countries have access to life-saving drugs.

The primary obstacle to scaling up production of COVID vaccines worldwide is called the Agreement on Trade-Related Aspects of Intellectual Property Rights, or TRIPS. This agreement came into effect under the World Trade Organization in 1995 after heavy lobbying by Pfizer. TRIPS was squarely in the crosshairs of the activists who shut down the WTO in 1999 (that movement inspired the group I co-founded, the Yes Men), but then it faded from view until recently.

It’s not the promise of massive profit that fuels great discoveries like the mRNA vaccines: it’s taxpayer funding plus human decency.

To those of us who’ve participated in the anti-WTO and other movements, as well as millions of other Americans, it’s long been obvious that American-style capitalism is an immoral life-and-death matter: some thrive, many die and there’s no “deserving” about it. Food deserts, impoverished public schools, and mass homelessness in the world’s richest nation — not to mention health care that’s decent only for those who pay well for it — are indictments of a system in which large corporations write policy.

But the vaccine apartheid that’s based on TRIPS is a whole other level of criminal. Hundreds of thousands have already died in poor countries — not indirectly, as with unequal access to food, water, sanitation and housing, but directly, because they don’t have access to life-saving medicines.

I know what it feels like to lose a close family member to preventable COVID. My father, a Holocaust survivor, died Jan. 8 of undiagnosed COVID-19 and pneumonia, after months of governmental ineptitude at keeping the virus in check and preparing hospitals for upcoming surges. The hospital in which he caught the virus had an overwhelming COVID caseload and could not prevent cross-infection; when he returned two weeks later, badly stressed doctors misdiagnosed him.

Knowing the anguish of one unnecessary bereavement, it’s hard to imagine anyone justifying hundreds of thousands of them in poor countries, all in the name of corporate profits. And yet by standing up for the intellectual property, or IP, rights of big corporations, that’s what big pharma does. “If you don’t protect IP, then essentially there is no incentive for anybody to innovate,” said AstraZeneca CEO Pascal Soriot.

This logic — the same used to justify the TRIPS rulings against generic HIV drugs in 1999 — is not only inhuman, it’s fundamentally wrong. It’s not in fact the promise of massive profit that fuels great discoveries like the mRNA vaccines now reining in COVID where they’re available: it’s taxpayer funding plus human decency. Massive profits may be the “incentive” of corporate higher-ups, but it’s not for the scientists and engineers at the core of life-saving efforts — like those at the National Institute of Health, or NIH.

The NIH has spent over $900 billion on research since the 1930s, and literally every medicine approved by the FDA from 2010-2016 involved taxpayer-funded NIH science. The research that led to the Moderna vaccine was almost entirely funded by the U.S. government too, and no one made billions developing it. But guided by the Reagan-era Bayh-Dole Act, the NIH systematically hands off their discoveries to corporations to “market” — which means charging people an arm and a leg for medicines that they themselves financed. And thanks to TRIPS, those corporations profit globally from these publicly-financed discoveries, at a huge cost to public health everywhere. (Bayh-Dole does provide the government with “march in” rights to suspend patents on government-funded inventions, but the government has never used them.)

The success of movements in forcing medical breakthroughs reminds us that a few thousand motivated activists can oppose big pharma and complicit government agencies.

Many of those who’ve made great life-saving discoveries or inventions have made it clear that far from providing “incentive,” corporate IP rights just get in the way. Jonas Salk deliberately refused to patent the polio vaccine or earn money from it; its dissemination unimpeded by patents, that vaccine virtually eradicated polio within a few years. The flu vaccine, too, has for the past 50 years been produced by scientists collaborating under the World Health Organization, saving countless lives without any intellectual property considerations at all. And Tim Berners-Lee, who on only a modest salary invented the World-Wide Web — a technology essential for containing COVID-19, and one big reason it hasn’t been as deadly as the 1918 Spanish Flu — has since noted that patenting the web would have been a disaster.

Biden changed his position on the TRIPS waiver only after facing months of protests and a petition to the White House signed by more than two million people. While that marked an important step forward, it is not nearly enough. Last week there was a series of protests across the country at pharmaceutical companies and German consulates — since the European Union, and Germany in particular, is still defending the vaccine patents.

In addition to calling for a temporary waiver of TRIPS, which is the bare minimum of what’s needed, today’s movements should consider long-term solutions. Since this will not be the last pandemic we face, intellectual property needs to stop being applied to life-saving medicines. Activists should set a high bar by calling for the complete abolition of TRIPS, as well as the rescinding of the Bayh-Dole Act. That would allow the NIH to hold onto patents for medicines it develops with public money. They can then be used for the public good, and any revenues they bring in can be funneled back into critical research.

This is not a novel idea. In fact, the very concept of intellectual property has been resisted since it reared its ugly head in the 19th century. And in the 1980s, groups like Health Action International called for eliminating patents for essential medicines, and for scaling up the development of generic alternatives.

HAI’s efforts helped Bangladesh maintain protections for low-priced essential medicines as well as domestic manufacturing, in the face of huge pressure from drug corporations as well as some governments. And when, in 1997, South Africa faced similar opposition over a law allowing manufacture of generic HIV drugs, social movements in South Africa, the United States, and elsewhere forced governments and eventually big pharma to back down, meaning many thousands could gain access to treatment.

The success of HAI, ACT UP and other movements in forcing policy changes and even medical breakthroughs reminds us that a few thousand motivated activists can oppose big pharma and complicit government agencies. If even a small percentage of those affected by COVID mobilized against TRIPS and Bayh-Dole, we’d end up with a world that’s safer not only for those who can’t afford criminal corporate price tags, but for everyone. After all, the virus, like common decency, knows no borders.