RINO former President George “Dubya” Bush and his flunky Karl Rove are endorsing warmongering and very low polling, Liz Cheney. Bush is the one who got us into the quicksand of the Middle East and, after spending trillions of dollars and killing nearly a million people, the Middle East was left in worse shape after 21 years than it was when he started his stupidity. It ended with Biden’s most embarrassing in history withdrawal from Afghanistan, a total surrender, leaving $85 Billion dollars of equipment and many young Warriors lives behind.

Bush is the person who did not have the courage to give a pardon to his Vice President’s Chief of Staff, Scooter Libby, even though Cheney begged for him to do so. He wouldn’t, they didn’t talk for years.

I didn’t know Scooter, but gave him a full pardon—not at their request, but because he deserved it. He suffered greatly. Former Vice President Cheney called to effusively thank me. Now he is on the side of his daughter who is so bad for Wyoming and the United States that she is polling at record lows. 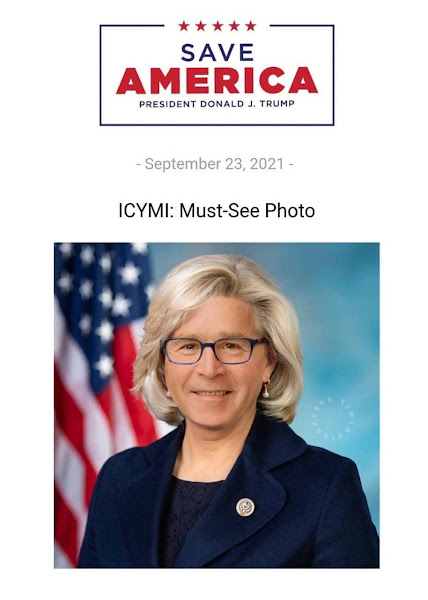 Why is the Fake News Media continuing on their path of saying, “baseless and disproven lies,” concerning the Presidential Election of 2020, no matter how much evidence they see? These phrases are coordinated propaganda by Lamestream. It is an automatic phrase they use about the 2020 Election Scam when in fact it was just the opposite. The proof is massive and staggering. The Presidential Election of 2020 was Rigged! When the information becomes public, people will see that it wasn’t even close.

I spent virtually no time with Senators Mike Lee of Utah, or Lindsey Graham of South Carolina, talking about the 2020 Presidential Election Scam or, as it is viewed by many, the “Crime of the Century.” Lindsey and Mike should be ashamed of themselves for not putting up the fight necessary to win. Look at the facts that are coming out in Arizona, Georgia, Michigan, Pennsylvania, Wisconsin, and other States. If this were Schumer and the Democrats, with the evidence we have of Election Fraud (especially newly revealed evidence), they would have never voted to approve Biden as President, and had they not, all of the mistakes that were made over the last month, which are destroying our Country, would not have happened. Mike Lee, Lindsey Graham, and all of the other Republicans who were unwilling to fight for the Presidency of the United States, which would have included at least an additional four Republican Senators, two in Georgia, one in Michigan, one in Arizona, are letting the Democrats get away with the greatest Election Hoax in history—a total con job!

We are losing our Country! The Democrats are vicious and fight like hell, and the Republicans do nothing about it. RINOs fight harder against Republicans than they do against Democrats. They want to be so politically correct, even if that means losing our Country, which is happening now. The evidence on determinative and wide-ranging Election Fraud is staggering. Your Republican Presidential candidate won in a landslide, but has so little backing from Republican “leadership.” They should be ashamed of themselves. Why don’t they have hearings? Or even if just Republicans had open public sessions, we would all hear the irrefutable facts. Remember, the Fake News Media does not report the truth!

Despite my big win in Texas, I hear Texans want an election audit! You know your fellow Texans have big questions about the November 2020 Election. Bills to audit elections in your great state’s House and Senate were considered during Texas’ Second Special Session. Instead, the legislature passed a watered-down amendment that doesn’t even apply to the 2020 Presidential Election. This short amendment doesn’t answer the questions Texans have about the last election. Texans demand a real audit to completely address their concerns.

We need HB 16, which was just filed in the Third Special Session. This legislation specifically addresses the 2020 Presidential Election, and enables audits for future elections. The bill creates a process for candidates and party chairs to initiate an audit, and uses the same language as SB 97, which already passed the Texas State Senate, but did not have enough time to make it through the House during the Second Special Session.

Texas needs you to act now. Your Third Special Session is the perfect, and maybe last, opportunity to pass this audit bill. Time is running out. Paper ballots in your state are only kept for 22 months after the election. Your citizens don’t trust the election system, and they want your leadership on this issue, which is the number one thing they care about. It is their most important issue—one that will affect 2022 and 2024.

Governor Abbott, we need a “Forensic Audit of the 2020 Election” added to the call. We’re quickly running out of time and it must be done this week. Texans know voting fraud occurred in some of their counties. Let’s get to the bottom of the 2020 Presidential Election Scam!

The wonderful Pete Hegseth of Fox News is doing a segment on us tonight at 7:00PM ET. A great guy!

Where have illegal immigrants from Del Rio gone?