▪️The Russian Armed Forces continue to tighten the ring of encirclement around the industrial zone in the southwest of Severodonetsk. Battles are taking place over the area of the motor transport enterprises adjacent to the treatment plant from the southeast. Occupation of this area will allow to reach the southern outskirts of the Azot plant, Severodonetsk thermal power plant and complete the encirclement.

The AFU defense south of the Azot plant rests on a chain of lakes. The AFU hold a bridgehead along Seversky Donets, control part of the Sirotino settlement adjacent to Frunze Street, as well as the Borovskoye settlement.

Most likely, the Russian Armed Forces control the Lesnaya Dacha settlement adjacent to the southern outskirts of Severodonetsk and Frunze Street behind the wooded area near the airport.

▪️The grouping at the Azot plant is supplied by two routes: via the Leninsky Bridge and country roads behind the lakes, as well as directly from Lisichansk by boats – people are taken to the dacha settlements to the TPP.

The foreign mercenary units involved in the defense of the Azot plant are suffering losses and in small groups tend to leave the eastern bank of the Seversky Donets.

▪️ In Lysychansk, individual units of the AFU are losing courage and leaving the area of combat operations. For example, a platoon of the 1st Company of the 1st Battalion of the 57th Motorized Infantry Brigade completely abandoned their positions. The reasons are prosaic: incessant shelling, lack of ammunition and low morale.

▪️LNR People’s Militia units are approaching the southern outskirts of Lysychansk. The clearance of Toshkivka has been completed. Fighting is going on in the areas of Ustinovka and Myrna Dolyna. The suburb of Lysychansk Belaya Gora is constantly being treated with artillery fire.

The Ukrainian Armed Forces are hurriedly pulling in reinforcements to the Toshkivka direction: a battalion of the 112th Brigade of the Tetra Defence Brigade is redeployed to reinforce it. 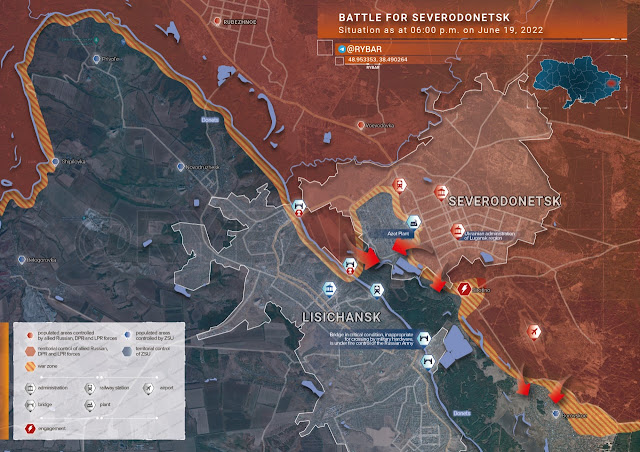 ▪️The fighting continues in the north of the region. The Ukrainian army suffered heavy losses and retreated from the outskirts of Rubizhne to Stary Saltov.

▪️On the Izyum direction, Ukrainian formations continue to probe the Russian Armed Forces’ defenses in an attempt to slow down the Russian Army’s offensive in Donbas. 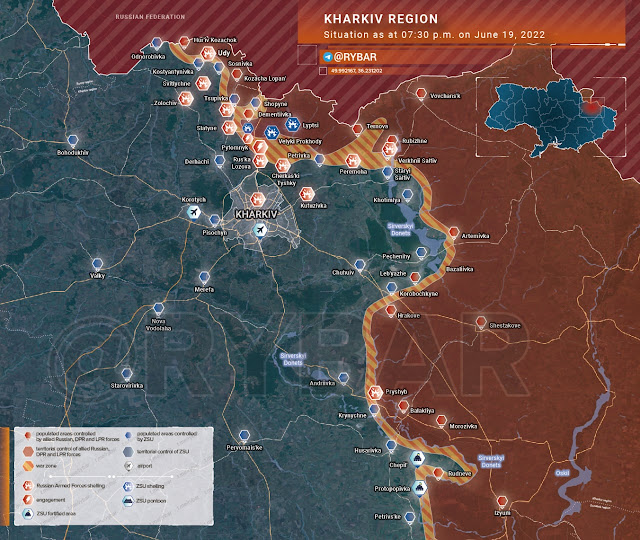 ▪️The sides continue fighting on the line of contact: the Russian Armed Forces struck Ukrainian army positions in the front-line villages of Posad-Pokrovske, Blagodatnoye and Kobzartsy.

An AFU SDF group arrived in Posad-Pokrovske to conduct additional reconnaissance of the RF Armed Forces’ positions in preparation for a new offensive on Kherson.

In the village of Liman on the right bank of the Southern Bug River, Ukrainian Army personnel were rotated.

▪️ The Russian Armed Forces launched a rocket attack on the workshops of an industrial enterprise in Mykolaiv: foreign artillery systems were destroyed. 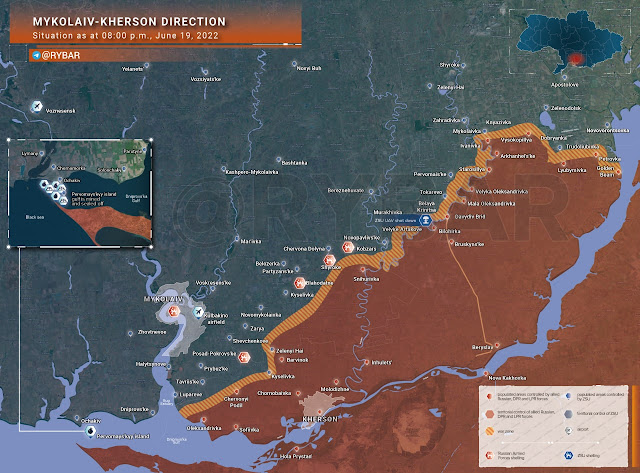 The capture of Nikolaevka will make it possible to reach the Lisichansk refinery. This will eventually encircle the Lysychansk-Severodonetsk grouping of the AFU and provide the outer contour of the encirclement of the AFU grouping in Gorske and Zolote.

▪️ A rifle battalion arrived from the western part of Ukraine from Volodymyr-Volynskyi to reinforce the positions of the 14th brigade.

The battalion suffered serious losses even before entering the positions. More than 100 AFU soldiers, 30 tanks and armored combat vehicles were destroyed as a result of the strike at the unloading point of the train near the Gubinikha railway station in Dnipropetrovsk region.

Battalion units sent to Mykolaivka suffered serious losses from Russian Armed Forces artillery fire as they entered their positions. The command staff fled, some of the personnel retreated from their positions and were captured by the advancing units.

A breakthrough of this defensive line will make it possible to reach Seversk and then Slavyansk from the east.

▪️The clearance of Toshkivka is completed. Fighting is going on in the areas of Ustinovka and Myrna Dolyna. The suburb of Lysychansk Belaya Gora is constantly treated with artillery fire.

The Ukrainian Armed Forces are hurriedly pulling in reinforcements to the Toshkivka direction: a battalion of the 112th Brigade of the Tetra Defence Brigade is redeployed to reinforce it.

▪️The AFU units in Zolote, Gorske and Katerynivka are in an operational encirclement. The personnel are entrenched, realizing that there is nowhere to retreat.

The position of the AFU in Gorske and Zolote is steadily deteriorating as the allied forces advance from Vrubovka and Toshkovka. The last supply line through Novoivanivka and Rai-Alexandrovka will be cut off one day from now.

▪️ Fighting in the direction of Pokrovske has become positional in nature, there is no progress. 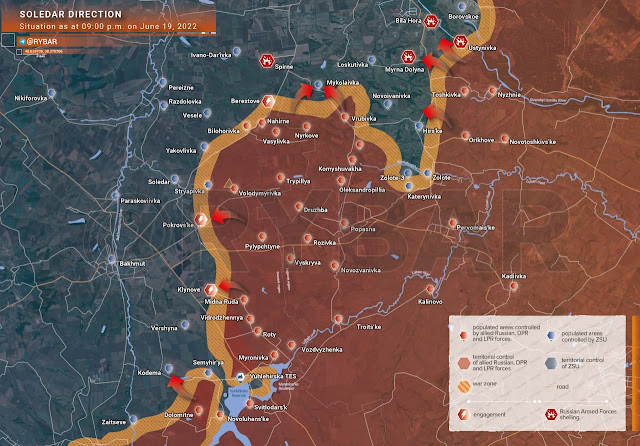