❗️🇷🇺🇺🇦 Situation on the Severodonetsk-Lysychansk direction as of 22:00 June 24, 2022 by @rybar

🔻 The Group of Forces “South” under the command of Army General Surovikin has completed the defeat of the encircled group of the AFU in the “Gorskoe cauldron”. Russian troops and units of the LNR People’s Militia liberated the settlements of GORSKOE and ZOLOTOYE.

There were up to 2,000 people in the “Gorskoe Cauldron”: about 1,800 soldiers, 120 Right Sector Nazis, up to 80 foreign mercenaries; as well as more than 40 armored fighting vehicles and about 80 guns and mortars. Officially, 41 servicemen of the AFU have laid down their arms.

🔻 Allied forces are mopping up the southern outskirts of Lysychansk. Units and military units of the Russian Armed Forces’ Center Group under the command of Colonel General Lapin have blockaded the city from the south

▪️ Fierce fighting is taking place in the industrial zones on the southern outskirts of Lysychansk at a gelatin factory and a rubber products plant. Militia units are clearing the Lisichansk glass factory.

Tank units of the 17th Detachment are firing indiscriminately to deter the Russian Armed Forces’ offensive in the south of Lysychansk.

▪️ Despite fire control of the route from Lysychansk, a partial withdrawal of forces to alternate positions has begun. At the same time, some units voluntarily abandoned their positions: 60 servicemen of the 57th infantry division retreated from their positions.

There is intensive shelling of AFU positions in certain areas of SEVERODONETSK and LISCHANSK. The remaining AFU units are trying to leave SEVERODONETSK by forcing the Seversky Donets River on their own.

Artillery units and aviation of the Russian Armed Forces destroyed AFU strongholds in Maloryazantsevo and Novodruzhsk. 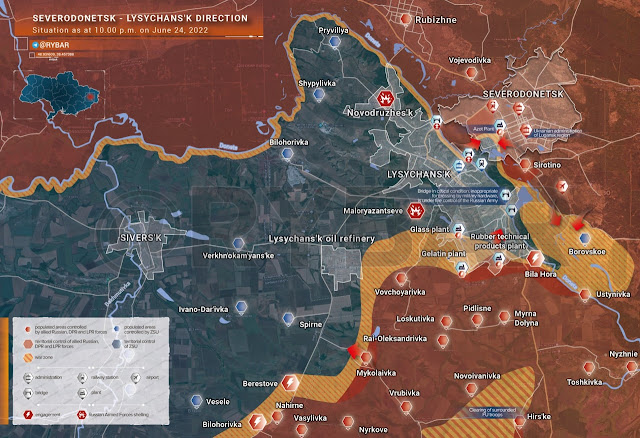