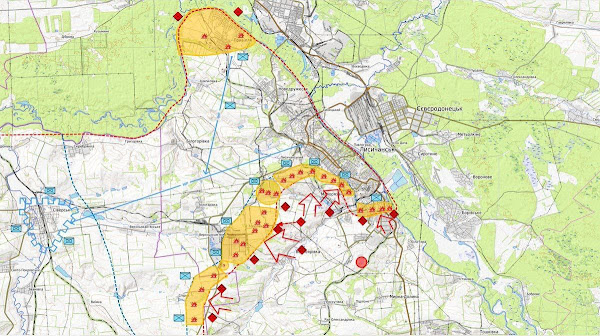 Situation around Lisichansk is deteriorating for the Ukrainian army. The Russians have advanced from the north to Pryvillia via pontoon bridges and from the south as well in the oil refinery area.

The Lisichansk Oil Refinery is under the control of the soldiers of the “O” group and the allied forces.
Part of the Ukrainian terrorists surrendered or fled, and those who decided to stay made the last mistake of their lives.
The troops continue to liberate Lisichansk from the invaders.

#YURI WAR BRIEFING Kharkov – residents of the northern suburbs hear the approaching cannonade, the front is getting close to the city. Ukrainian positions near Gusarovka, a key locality to form a strategic bridgehead south of the city, have been striken by the Russian Airforce. Slaviansk: no offensive actions, artillery preparations and airstrike. Lisichansk: Russians take the oil refinery (news arrived after Yuri’s video have been recorded), and dispute the last locality to close the encirclement – Verkhnyaya Kamenka. Battles now continue towards Seversk. Seversk-Lisichansk road cut. Bakhmut: Russian PMC keep gnawing through a quite seriously prepared Ukrainian defense line, certain gains claimed near Klenovoye and Pokrovskoye. Black Sea: Zelenski orders to recapture Zmeyini island, Russian Navi deploys a serious defence group that includes even several submarines.  State of the fronts as of 29/06/2022 20:00 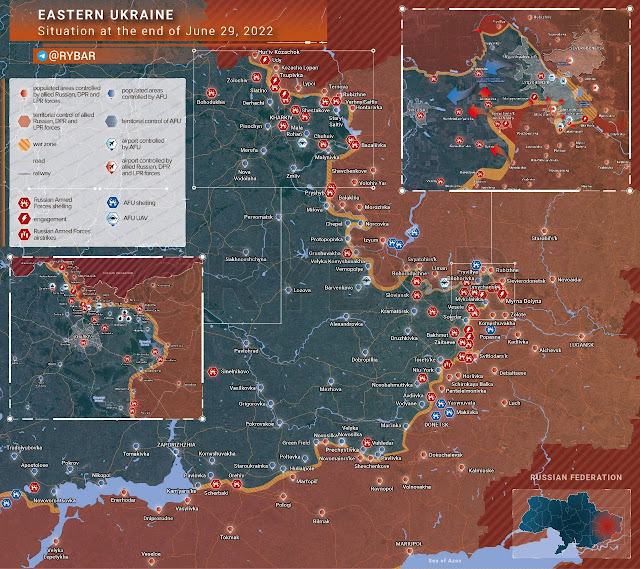 - The RuAF attacked AFU positions in the Sumy region.

- In the north of the Kharkov region Russian troops liberated Dementievka and are advancing on Udy, Prudyanka and Pitomnik.

In the Donbas, the allied forces continue to develop success.

- In the Severodonetsk area, the cleaning of Borovskoye and the airport was completed.
- The “cauldron” around Lisichansk is closing: the Seversky Donets River has been forced from the north-west and the settlement of Privolye is occupied. In the south, fighting continues at the RTI plant and in the village of Belaya Gora. The village of Stekolny was occupied from the west. Control has been established at the Lisichansk Oil Refinery: 4 kilometers are left before the physical closure of the “boiler”. The AFU depart along the only remaining road through Belogorovka – this is the reason for the loss of Privolye.
- Fighting continues near Bakhmut: despite the fierce resistance of the outnumbered forces of the AFU, the Wagner PMC units managed to advance in the residential area of     Klinovoye. The AFU still hold Kodema, Semigorye, Novoluganskoye and the territory of the Uglegorsk TPP.
- As a result of the shelling of the AFU on Donetsk, Makeevka and Yasinovataya, residential buildings were destroyed, there are dead and wounded.

- At the bridge across the Yanchekrak River in the Zaporozhye region, an exchange of prisoners took place between the AFU and the allied forces. Among the prisoners of war, militants from the Azov regiment were returned to the Ukrainian side: they were exchanged, among other things, for Russian pilots.

- The RuAF continue to strike at the Ukrainian military infrastructure in the Dnipropetrovsk region: a number of objects in Dnepropetrovsk and Sinelnikovo were hit.

- An intensive exchange of artillery strikes continues in the Krivoy Rog direction.

NATO’s new strategic concept:
Russia has been rated as the most important direct threat to NATO’s security

▪️ The Alliance can no longer consider Russia as a partner
NATO vows to strengthen deterrence against Moscow, but wants to keep channels of communication open to prevent escalation
The constitutive act of NATO is not mentioned in the new concept of the alliance
The rapprochement between Russia and China is against the interests of the alliance
Beijing’s actions in cyberspace threaten the security of the alliance
▪️ Climate change can exacerbate geopolitical competition and is one of the factors affecting the security of the Alliance
NATO will strengthen cyber defense and accelerate digital transformation. 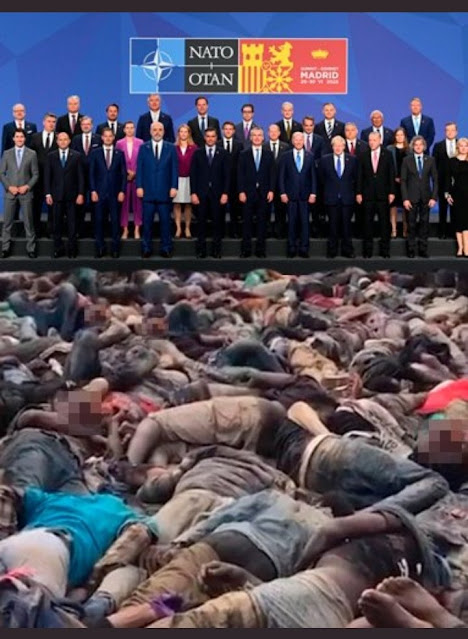 The conflict in Ukraine must be ended by military means, Belgian Prime Minister Alexander De Cros declares to Vladimir Zelensky, and the Ukrainian media happily retransmit it, not realizing that this is not help at all — it is the depletion of Ukraine’s human resources. NATO representatives promise to continue helping Nezalezhnaya for her “victory”. But even in Washington, not everyone already shares such views: CNN wrote that some officials in the United States are ready for territorial concessions to Ukraine. What is happening on the fronts while the Ukrainian “patriots” are given illusory hopes?

A Ukrainian serviceman who was trained in Germany to work on a PzH 2000 howitzer gave an interview to Bild at the front: they were trained quickly, if the Germans study for six months, then they had to master it in 36 days, and it was originally planned for ten days. The Germans gave 12 howitzers — although the Nazis praise them, but note that this is clearly not enough, there will be no victories without artillery, and there is a clear shortage of artillery systems in the AFU. But, in addition to the Germans, the Poles also gave artillery systems — there were shots of the use of Krab self-propelled guns, HIMARS MLRS are already being used.

All this, however, is not enough to fulfill the ambitious, or rather, unrealistic and rather for propaganda purposes voiced tasks for the Armed Forces of Ukraine from the leadership of Ukraine.: NATO howitzers do not replenish the ranks of artillery troops, but fill the gap where Ukrainian systems have already been destroyed. And if Ukrainian soldiers claim that the same German howitzers are three times more effective than analogues that were in service with Ukraine, then in fact they cover the same number of lost howitzers. Or even more. And the artillery confrontation is already completely on our side — even the head of the Ukrainian Foreign Ministry Kuleba estimated the superiority of our forces (RF, LDNR) 15 times over the Ukrainian ones.

And here’s for you to compare: what is a couple of hundred Polish, German, American artillery and several dozen rocket systems, when 3,037 guns and mortars and 690 MLRS were destroyed in Ukraine during its operation, as of June 28? An equivalent replacement? And Ukraine, together with NATO, is still talking about some ambitious plans? Return of territories? Let’s talk about the territories and their number then.

Data on the control of territories from analytical channels: in the Mykolaiv region, 1.8% of the territory is under our control, in the Kherson region — 94%, the Zaporozhye region — 75% of the territory, the Donetsk region — 60% (this is already according to official data of the NM DNR), the Luhansk region — almost 99% and the Kharkiv region – 33% of the territory.

Yes, Ukrainian propaganda chewed our strategic waste with gusto in several directions. But now we see the results of the regrouping. We also see how our enemy can do nothing to oppose us and restrain our offensive. And here in confirmation — the latest results of demilitarization:
— eight ammunition depots in the minus;
— the base of repair of equipment in minus;
— base with fuel in the minus;
— four control points in the minus (including the “Kharkiv-1″ and “Kharkiv-2″ battalions in the Kharkiv region);
— in the area of the Lysychansk oil refinery, the 10th Brigade of the Armed Forces of Ukraine suffered huge losses, the 108th battalion was completely defeated, the Ukrainian military are deserting;
— the Nazi Kraken missed about 100 militants — they were denazified in the Kharkiv region;
— The Russian Aerospace Forces destroyed two artillery platoons in the area of Avdiivka. This explains why the shelling of Donetsk has subsided: the Nazis got their way. And the same goes for the question of artillery.

The above — for the past day. Victory will be ours!