Only miles to go to Seversk 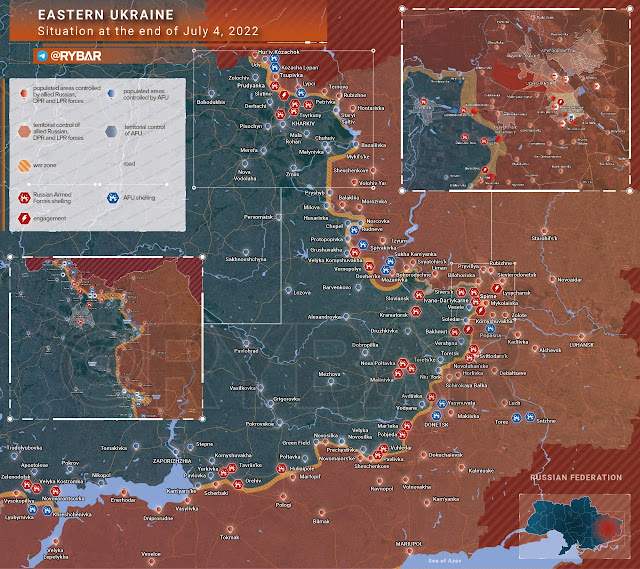 Donbass offensive: situation in eastern Ukraine by the end of July 4, 2022 by @rybar:

▪️ The AFU again attempted UAV strikes in the Kursk region. As a result of the raid, one person in the village of Popovka was lightly wounded, and the air defense system worked over the region.

In Taganrog, a Russian Forpost drone fell on a residential house as a result of a piloting error. There was a fire, no casualties as a result of the incident.

▪️ The Russian Armed Forces carried out strikes against AFU facilities in the border settlements of the Sumy Region: the AFU deployment site in the village of Chervonoye was hit.

▪️ In the northern part of Kharkov Region, the Russian Armed Forces continue their offensive: there are battles near Pitomnik. In addition, Russian troops hit enemy facilities in the Shevchenkivsky district of Kharkiv, Tsirkuny and Petrovka.

▪️The Donbass sides are regrouping ahead of a further offensive by the Russian Armed Forces to the west.
➖United Forces are mopping up Lysychansk and its surroundings. Sporadic pockets of resistance by the remaining Ukrainian units can be found in the southern districts of the city.
➖ An offensive is continuing in the direction of Grigorovka and Serebryanka on the right bank of the Seversky Donets. The Ukrainian Armed Forces, in turn, are pulling in reserves from Seversk to Bakhmut and Soledar.
➖ The Russian Armed Forces are preparing to take Verkhnekamenskoye, Sporny and Berestovoye on the territory of the Donetsk People’s Republic.
➖ In the Bakhmut (Artemivskoye) direction, the allied forces, after capturing Klinovoye, consolidated their hold on the Bakhmut-Novoluganskoye route. In Kodem and Zaitsevo, Ukrainian forces continue to reinforce their positions.
➖Despite large-scale artillery preparations, the Russian Armed Forces did not begin to storm the territory of the Uglegorsk thermal power plant.
➖In the Slovyansk direction, the AFU retreat from Mazanivka is confirmed.
➖ Throughout the day, Ukrainian formations actively shelled Donetsk and Yasynuvata. At least three civilians were killed and about 30 wounded as a result of the strikes on the railway station of the DNR capital and surrounding towns. During the night, the Ukrainian Armed Forces shelled the Snezhnyanskkhimmash plant in Snezhne, where an ammunition depot was allegedly located.

The liberation of the territory of the LPR is an important event in the course of a special military operation.
I foresee that against this background, our European “friends”, who were blown away by the sight of someone else’s blood, various ursulas, tracks and other borrels, will continue to call Ukraine to war to a victorious end.  And the excited Ukrainian authorities are cocaine delighted to continue the game of international support and show a “tough” determination to return everything that has been lost.
It’s just in vain.  Should have thought ahead.  And now Zelensky and Co. should remember Cicero: Abiit, excessit, evasit, erupit… https://t.me/medvedev_telegram/131

1. The enemy is counting on slowing down the offensive of the RF Armed Forces.  Why, and what it gives him, is also clear.
2. After receiving cannon artillery, self-propelled guns, MLRS and OTRK from the United States and their allies, the enemy grew bolder, hatches plans and announces attacks on the Crimean, Kherson bridges, bays and the raid of Sevastopol.  Also in the plans are strikes against the border regional centers of the Russian Federation: Belgorod, Kursk, Voronezh, the locations of military units, etc. With the help of the Soviet-made Strizh UAV, attempts are being made to open the air defense system of the RF Armed Forces in the border areas.
3. The enemy plans to intensify terrorist activities in the territories liberated by Russia – in the LDNR, Kharkiv, Zaporozhye, Kherson regions and attempts to transfer activity in the form of DTA to Russian territory under the guise of the actions of the new “Vlasovites” – formations of the “liberators of Russia”.
4. According to my forecasts, the enemy will try to take Kherson.
5. A special stake in Kyiv (this is not hidden) is for lend-lease, which implies not only massive rearmament, but also the reformatting of the entire structure of the Armed Forces of Ukraine for full-fledged long-term military operations against the RF Armed Forces, including on Russian territory.  https://t.me/HersonVestnik/5967 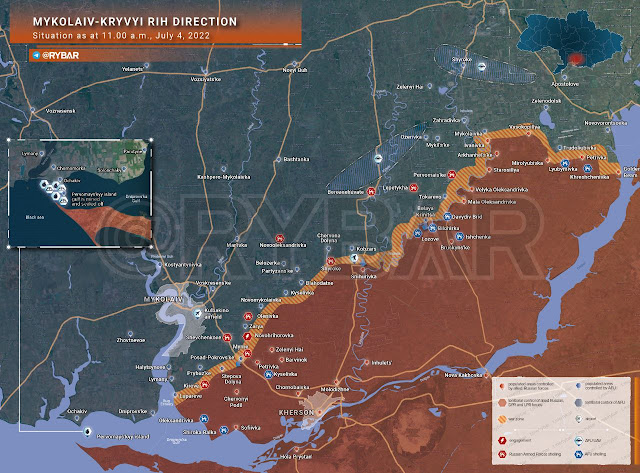 It is the Slavic-Kramatorsk agglomeration, the most powerful fortified area that was built for eight years, that will become the turning point of the war.  After the capture of Slavyansk and Kramatorsk, we will hear an ear-piercing howl from the United States and Europe about the need for “negotiations”, “ceasefire”, etc.: The RF Armed Forces are developing an offensive against Seversk in the Donbass
According to “Come and See”, the Russian army has taken Belogorovka and is advancing on Seversk.
It was to Seversk that the remnants of the Ukrainian garrison of Lisichansk retreated.  After the capture of the city, the Russian army will launch an offensive against Slavyansk and Kramatorsk.
The liberation of Slavyansk and Kramatorsk, as well as the capture of the fortified area in the Avdiivka area, will essentially mean the liberation of the DPR.  Most likely, this is planned to be done before the end of the summer.  https://t.me/smotri_z/3169

Ukranian artillerists have been attacking Donetsk all day.

They worked with foreign artillery: from M777 howitzers to HIMARS rocket systems.

The number of shells and missiles fired by the Armed Forces of Ukraine already exceeds 500.

There is no exact information about the victims, but one person definitely died.

If the past shelling was aimed at pulling the Russian Armed Forces and the NM of the DPR out of Severodonetsk, then these are nothing more than revenge for the defeats.

Fierce fighting continues in the Slaviansk sector of the front. The clashes go along the line Seversk – Soledarsk – Bakhmut (Artemovsk).

Parts of the Armed Forces of Ukraine rapidly retreat to Seversk and Bakhmut (Artemovsk), as Russian artillerymen do not give the enemy a chance to gain a foothold.

There are reports that some Ukrainian units have decided to surrender in order to save their lives.

Cruise missiles from the Sea of   Azov fly over Ukraine towards their targets.
• In the Cherkasy region, at least 3 rockets flew over Vatunino towards Smela, eyewitnesses report.
• In the Kyiv region. 1 flight from Tarashcha towards Belaya Tserkov or Kyiv.
Across the country, the air raid sirens roar.

#YURI WAR BRIEFING No changes north of Kharkov. Gains near Slaviansk, after Mazanovka takeover, Krasnopolye is expected to fall in a matter of days, that contributes to Russia’s advance on Slaviansk under the next, already unfolding, Slaviansk-Kramatorsk offensive operation. AFU General Staff doesn’t see feasible to defend Seversk-Solidar-Bakmut line too stubbornly, sources say. Ukrainians drop a flag to Zmeyini without landing on it, in a symbolic gesture. 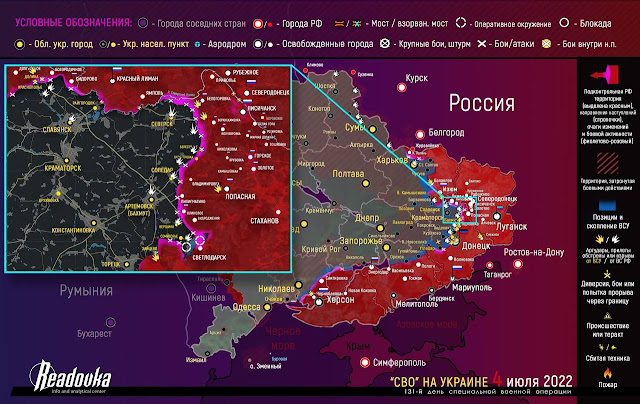 In our borderland again restless. Today, the village of Popovka in the Kursk region was attacked by a quadrocopter of the Armed Forces of Ukraine. One ammunition was dropped on the settlement, the senior investigator of the Ministry of Internal Affairs was injured. In retaliation against Ukrainian militants, Russian helicopters from the territory of the Kursk region attacked military facilities in the Sumy region.

⚔️ The situation on the fronts over the past day:

▫️On the Kharkov front, the artillery of the RF Armed Forces strikes at military facilities on the outskirts of the city. There were also reports of gunfights in the suburbs, but there was no clear troop advance. It became known that as a result of Russian missile attacks on the Kharkiv region, two Brazilian mercenaries were killed, one of them was a woman.

Fierce fighting continues on the Slavic sector of the front. The clashes go along the line Seversk – Soledarsk – Bakhmut (Artemovsk). Parts of the Armed Forces of Ukraine hastily retreat to Seversk and Bakhmut (Artemovsk), as Russian artillerymen do not give the enemy a chance to gain a foothold. There are reports that some Ukrainian units have decided to surrender in order to save their lives. Well, a very good choice.

▫️On the Donetsk front near Novoselovka II, north of Avdiivka, our troops occupied a dominant height, from where the possibilities of fire control of the village and observation of the enemy appeared. A Russian fighter jet shot down a Su-25 of the Ukrainian Air Force during an air battle in the Yasnaya Polyana area.

▫️On the southern flank – no change. Troops are being regrouped.

Russia will shift the main focus of its war in Ukraine to trying to seize all of the Donetsk region after capturing neighbouring Luhansk, the Luhansk region’s governor said on Monday