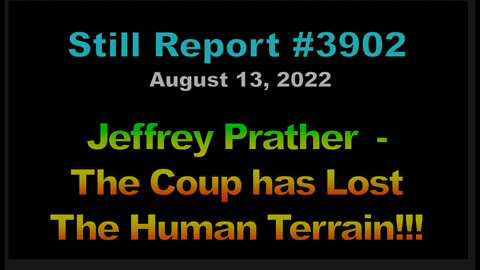 RSBN – the Right Side Broadcasting Network — did a livestream broadcast earlier today from Phoenix, Arizona of a TrueTheVote conference on their plans to catch some cheaters this November. I’ve said many times on this program that I had my doubts about a for-sure positive outcome for the upcoming elections. Why? Because I’ve seen nothing to indicate anything has been put in place to put the fear of God in the minds of these desperados.

Has there been any breaking news that all voting machines have been disconnected from the Internet? Not as far as I know. Has there been any national surge in support for outlawing Voting Drop Boxes? Only in a few places.

TrueTheVote is setting up very sophisticated surveillance systems to catch the mules that will undoubtedly proliferate once again this November. And they don’t even need Soros money or probably even Zuckerbucks this time! Why? Because now they have Biden Bucks. Their latest climate change bill sailed thru yesterday propelled by record-setting arm-twisting, and that probably included record-setting slush fund enhancements to all the major political bigshots – and probably the little shots as well.

They no longer have to quibble over millions of dollars to buy votes. They have graduated to the billions of dollars this year. They can now throw around a billion here and another billion there, and it all comes out of our pockets and goes directly into the pockets of those who want to destroy this great experiment in self-governance. I guarantee you that no conservatives will be getting any no-bid contracts out of the billions the Desperados just voted for themselves. This windfall will empower the America haters with a new level of wealth to help them carry out any and all covert operations imaginable, both in 2022 and 2024.

So, my prediction is it’s not going to get better this November; it’s going to be worse. Does that mean we can’t win both houses? Not at all. Never underestimate the Monster Vote again this time. Hang on to Genesis 50, verse 20:

“You meant evil against me, but God meant it for good.”

How so? God has got this. Imagine if Trump had narrowly won in 2020. Yes, that would have saved any number of horrible outcomes for the USA, but for how long? So, this is bitter medicine, but better we take it now than later. Every year that their covert ops against free and fair elections have gone unnoticed, has only made them stronger. So, it took something as blatant as stopping the presidential election count in the key battleground states at 2 am to jolt us into wakefulness. We can’t deny it any more.

How long has this been going on? Someone will tell us someday and it’s probably longer than we would guess – but all of the love-America team has been hoping against hope that it wasn’t true. Why? Because then, they would have to start – and I mean START – figuring out how to do something about it because we have also realized that we can expect exactly zero help from the federal government headquartered in Washington, DC. Now that we know. Now we can start to develop strategies to put an end to it, where before, the minions of Satan had a clear runway with no effective resistance.

TrueTheVote has come up with a remarkably sophisticated counter to this scam. How big a dent into the plans of the minions of Satan can we make? Don’t know. We’ll talk about TrueTheVote’s plans later on, but tonight, I want to focus on an odd sort of bird – a guy with more experience in covert ops than anyone I’ve known of – with one possible exception. He talks fast, so pay close attention. There are some real gems in here as he explains what’s really going on behind the curtain. He talks about the fusion centers of the federal government because TrueTheVote is putting together it’s own Fusion Center to coordinate the pushback in November as it develops. We all need to sign up at https://www.truethevote.org and give some time and money because until Trump returns, this is the only game in town that I know of.