The #Donbass offensive: the situation in Eastern Ukraine as the end of August 11, 2022 by @rybar:

▪️ Three Russian servicemen were wounded as a result of shelling by the Ukrainian armed forces in the Glushkov district of Kursk Region. Houses in Tetkino and Popovo-Lezhachy were damaged.

▪️ The Russian Armed Forces hit AFU facilities in the village of Logi in Chernigov Region, as well as Vorozhba, Mezenovka, Grabovskoye and Slavgorod in Sumy Region.

▪️ During the overnight hours, the Russian Armed Forces launched missile strikes against Ukrainian positions in the Kiev district of Kharkov. Russian army aviation operated on targets near Stary Saltov and Rtyshchevka.

▪️ In the Slavyansk direction, the Russian Armed Forces carried out strikes on Ukrainian Armed Forces’ targets near Kramatorsk and in Konstantinovka.

▪️ Fierce clashes are taking place in the Bakhmut (Artemovsk) direction:
➖ There is fighting on the eastern outskirts of Soledar and Bakhmut, as well as in the village of Kodema near the Uglegorsk thermal power plant.
➖ Allied forces continue to push the enemy out of Zaitsevo north of Gorlovka.

▪️ In the Donetsk direction there are battles near AFU strongholds on the outskirts of the DPR capital:
➖ Clashes continue in the northwestern part of the Peski settlement, with Ukrainian formations pulling reserves to the settlement. The Russian Armed Forces are firing on the enemy’s fortified positions using heavy TOS-1A flamethrower systems.
➖ The Ukrainian Armed Forces once again shelled towns in Donetsk agglomeration: several residents, including teenagers, were injured. In addition, the DPR Emergencies Ministry eliminated the consequences of yesterday’s strike by the Ukrainian army on the ammonia storage facility at the Donetsk brewery.
➖ Near Ugledar, an AFU platoon, supported by two BMPs, attempted to attack DPR positions in Nikolskoye. It failed: the attackers lost all their equipment and retreated to their initial positions with losses. 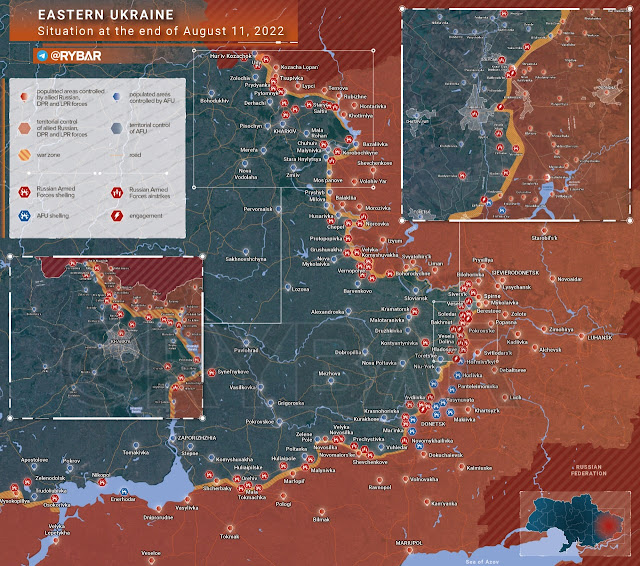 Assault on the fortified area of   the Ukrainian Armed Forces in Avdeevka: the 1st Slavic Brigade destroys the enemy’s strongholds

The enemy’s defense in the Avdeev direction is bursting at the seams. Fighters of the 1st Slavic Brigade of the DNR productively break the defense of the Ukrainian Nazis, the damage is inflicted by 100-mm howitzers MT-12 (Rapira). Artillerymen help assault units move forward.

Soldiers of the 3rd Brigade of the People’s Militia of the DPR knocked out the invaders from another settlement in Donbass. Grateful residents of Gladosovo spoke about the atrocities of Ukrainian nationalists committed by shelling and destruction of their settlement.

When conducting electronic intelligence in the Donbass, the Russian Guards recorded the location of 39 enemy UAV operators. After being hit by artillery fire, the targets ceased activity.

The mortars of the Russian Guard also show high performance – in a day they completed 35 fire missions, destroying the stronghold of the Armed Forces of Ukraine and the Nazi BRDM.

The General Staff of the Armed Forces of Ukraine announces the offensive of Russian troops from several directions at once. The main thing from the summary of the enemy:

• Kharkiv direction. The Russian army conducts assault operations in the areas of the settlement: Udy, Petrovka and Gusarovka;
• Slavyansk direction. Near Bolshaya Kamyshevakha, Russian troops inflict fire damage on the positions of the Armed Forces of Ukraine and take actions to break through the defense;
• The Russian army continues to advance on Artyomovsk, Kodema, Disputed, Yakovlevka and Soledar.

Military correspondent Pegov (Wargonzo) reports that the advanced units of our troops operating on the eastern outskirts of Artemovsk are fighting for the furniture factory and the Lafarge enterprise on Patrice Lumumba Street, moving towards the residential areas of the city through the industrial zone.

There are numerous arrivals to the west of Artemovsk.  There were also arrivals in the city.  The intensity of hostilities on the outskirts of Artemovsk is growing.

Panic reigns in the world media because of the shelling of the largest Zaporozhye nuclear power plant in Europe: the Armed Forces of the Russian Federation (sic!) want to arrange a nuclear catastrophe and do not allow the Armed Forces of Ukraine to save the world. The fact that the strikes are being carried out by the Ukrainian side does not bother anyone.

The @rybar team decided to analyze and explain whether a new catastrophe awaits the world, who is to blame and why what is happening is happening.

Fans of the series “Chernobyl” are well aware of the reactors, rods, shell damage and other horrors that accompanied the catastrophe of the last century.

▪️ Shelling does not pose a threat to the reactors themselves.

The outer shell of the reactor is one and a half meters of steel and concrete. To destroy it, it is necessary to use tactical nuclear weapons. And the reactor lid can withstand a blow of 20 tons at a speed of 200 km/h.

▪️ But now the Armed Forces of Ukraine are hitting power lines. If the reactors are disconnected from consumers, an emergency shutdown will occur – the ZNPP will not be able to generate electricity.

To stop the reactor is a matter of 10 seconds. But then it needs to be cooled down for another two or three years: to drive water through it so that it does not overheat, since secondary decay of nuclear fuel will occur.

▪️AFU strikes can lead to a permanent shutdown of the reactor.

It is enough just to disrupt the process of water supply after the failure of the power line. It will no longer be possible to cool down the disconnected reactor. There will be a red-hot air-cooled metal barrel that cannot be started back.

❗️There will be no threat of a nuclear catastrophe, but with the Zaporizhzhya NPP you will get the classic “then may you not belong to anyone.”
ðŸ‘‰ðŸ‘‰

In the event of critical damage to the Zaporizhzhya NPP, radiation will destroy all the territories of Ukraine and partially affect all neighboring countries.

“If the UAF attacks continue, it (nuclear catastrophe) can happen at any moment. Then the territories of Kyiv, Kharkov, Zaporozhye, Poltava, Kherson, Odessa, Nikolaev, Kirovograd, Vinnitsa regions will be under the threat of radioactive contamination. Donetsk and Lugansk People’s Republics. Border regions of Russia and Belarus, as well as Moldova, Bulgaria and Romania. And these are the most optimistic expert forecasts. The real scale of the nuclear catastrophe at the ZNPP is impossible even to imagine. In this case, all responsibility for this will fall on the Western sponsors of Kyiv, ”Vasily Nebenzya, Permanent Representative of Russia to the UN Security Council.”

- Only thanks to the skillful, competent and effective actions of the units of the Russian Armed Forces to cover the nuclear power facility, the critical infrastructure of the nuclear power plant was not damaged and the operation of the reactors was not disrupted, the Ministry of Defense said;

- Further shelling of the Zaporizhzhya nuclear power plant can lead to a disaster comparable in scale to Chernobyl.

- The UN has expressed concern over the ongoing fighting at the Zaporozhye  power plant.

- Responsibility for the catastrophe at this nuclear power plant,  will fall entirely on the Western patrons of Kyiv, Russian Permanent Kiev presentative to the UN Nebenzia said at a UN Security Council meeting;

- Russia considers it justified that the IAEA specialists arrive at the ZNPP “as early as possible”.

Reply by the Permanent Representative V.A. in the UN:

Our Western colleagues have long chosen what they believe is a win-win tactic when discussing various issues around Ukraine: coordinated shifting responsibility for everything that happens in the war zone to Russia. Any, even hypothetical, guilt of Kyiv is rejected by them a priori. So it was with the provocations in Bucha, Irpen and Kramatorsk.

Russia does not use civilian infrastructure, let alone nuclear facilities, for military purposes. This is the tactic of the Ukrainian armed forces, which, in violation of the norms of international humanitarian law, place combat positions near civilian objects, hiding behind civilians as a human shield. 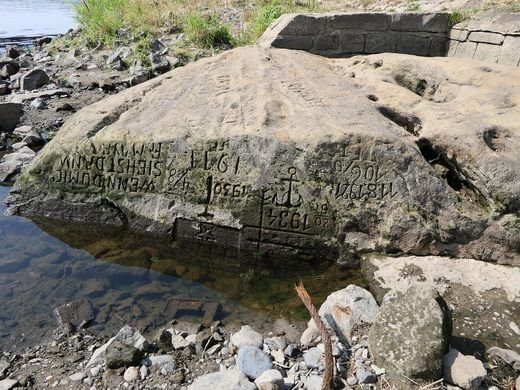 The recent droughts in Europe once again made visible the “Hunger Stones” in some Czech and German rivers. These stones were used to mark desperately low river levels that would forecast famines.

Medvedev on TG:
The main Ukrainian clown proposed “to call to account the entire population of Russia.” The last time Adolf Hitler tried to implement such ideas in relation to an entire nation. Do you have any more questions about the nature of Ukrainian power?

Another prisoner. Exemplary. I realized that the devil had confused him and decided not to push my luck. As a result, Mikhail surrendered to our soldiers from the Akhmat special forces and remained alive. Now his life is not in danger.

There are more and more people who are disappointed in the politics of the drug addict Zelensky every day. Ukrainians are beginning to realize that their country has become a bargaining chip for the West. So this prisoner not only surrendered himself, but also calls in an interview with the commander of the special forces “Akhmat” Ahmed Saidarkhanov to follow his example of all the soldiers deceived by Kiev. The case speaks.

Over the past day, good results have been achieved in the direction of Novopetrovka and Yakovlevka, three enemy positions have been destroyed. The Nazi formations decided to recoup in the Bakhmut sector and attempted a counterattack. Apparently, they forgot who they were climbing on, and therefore the survivors quickly retreated, leaving the useless bodies of their ideological comrades scattered.

So, Mikhail’s comrades should listen to him. There is not much time for this, given that our fighters are successfully continuing the offensive.

Russian paratroopers in the Donbass

fighting In Zaitseve (south) in Ukraine