Attack on Donbass: the situation in the east of Ukraine by the end of September 14, 2022

ðŸ”»Border territories of the Russian Federation:

The Armed Forces of Ukraine attacked Russian servicemen near the village of Elizavetovka on the border of the Sumy and Kursk regions, but they were rebuffed and retreated.

▪️In the Belgorod region, the enemy shelled the villages of Krasny Khutor and Zhuravlevka, there were no wounded or injured.

▪️The situation in Liman and Yampol remains calm: the allied forces continue to repel the attacks of the Armed Forces of Ukraine on this sector of the front.

▪️Ukrainian DRGs are periodically thrown into Russian-controlled territory across the Oskol River.

▪️The RF Armed Forces carried out several missile strikes on the facilities of the Armed Forces of Ukraine in Kharkiv.

▪️Assault detachments of “PMC Wagner” are engaged in positional battles on the outskirts of Bakhmut (Artemovsk) and Soledar.

▪️To the south, the allied forces are advancing towards Zaitsevo, the capture of which in the future will allow blocking Bakhmut from the south.

▪️ Positional battles continue in the vicinity of Pervomaisky and Pesok.

▪️The Ukrainian command continues to prepare for a counteroffensive on the settlements of the Donetsk agglomeration.

▪️The Armed Forces of Ukraine are gathering personnel and equipment of the 60th Opbr Brigade in the area of   Knyazevka and Topolinoye for the subsequent attack on Novovoznesenskoye.

▪️At the same time, two companies of the 97th battalion of the 60th brigade and several tanks from the 17th brigade are planning to storm strongholds in Arkhangelsk. 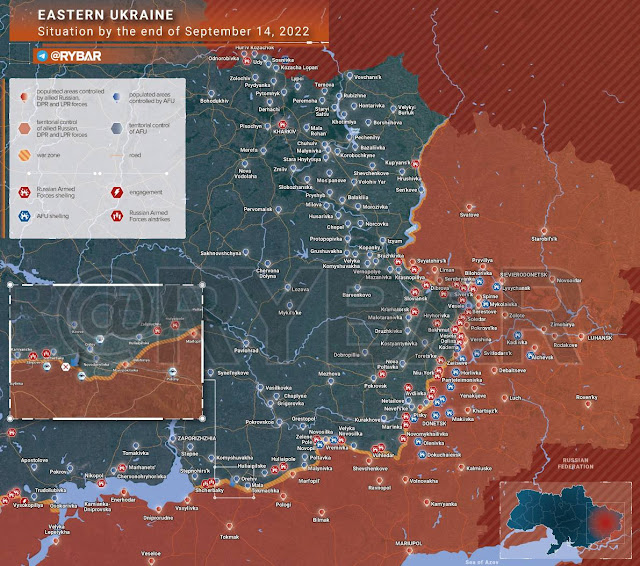 In the Zaporozhye direction, the Armed Forces of Ukraine are gathering forces for a possible offensive and are conducting reconnaissance in force.

▪️In the morning, around 8:00 am, the Armed Forces of Ukraine pulled equipment to the Orekhovo area. An hour later, Ukrainian formations began to move towards the positions of the Russian Armed Forces in Nesteryanka, trying to bypass it from two sides.

▪️However, the attack quickly bogged down: Russian units inflicted fire damage on the advancing forces, and one YPR-765 infantry fighting vehicle was blown up by a mine.

Also, a T-72 tank ran into a mine, which was then fired several shots from an RPG. Servicemen of the RF Armed Forces took seven prisoners from the 65th brigade of the Armed Forces of Ukraine: four infantrymen and a tank crew, together with a lieutenant commander.

The enemy made no further attempts to actively attack.

▪️ In addition, an AN / TPQ-36 counter-battery radar was deployed in Chervona Krinitsa to open Russian firing positions. 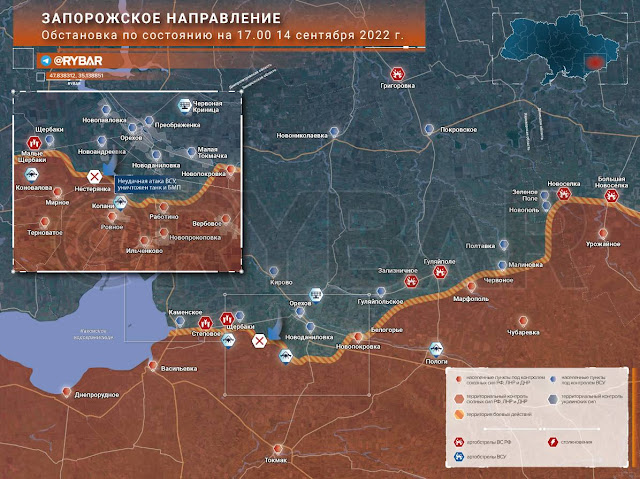 #YURI A strategic missile strike on a dam near Krivoy Rog destroys the pontoon crossings of the AFU near Davidov Brod, cutting off the Ukrainian forces on the bridgehead. Right now, the cut-off troops are being destroyed by the airforce and artillery. Thus, the Russians have a chance of annulling the Ukrainian gains in Kherson region achieved in last month.

In Zaporozhye region, Ukrainians attempt a recon by combat, indicating a high probability of the impending offensive. Generally, the day have been relatively calm. State of the fronts as of 19:00 CEST 14/09

▪️The RF Armed Forces with massive attacks on manpower and military equipment of the 14th and 93rd mechanized brigades of the Ukrainian military in the area of     Balakleya, Kupyansk and Dvurechnaya in the Kharkiv region destroyed up to 150 Ukrainian military and over 10 pieces of equipment in the Kharkiv direction
▪️In the Nikolaev-Kryvyi Rih direction, Ukrainian troops lost another 150 soldiers during the ongoing offensive attempts
▪️Russian aviation, missile troops and artillery destroyed the Ukrainian MLRS “Hurricane” in the Krasny Liman region of the DPR, a US-made AN / TPQ-64 radar station in the Nikolaev region and four ammunition depots in the DPR and Kharkiv region
▪️Russian air defense systems shot down 33 shells of Ukrainian MLRS, including 26 HIMARS. In addition, Russian air defense shot down four Ukrainian drones in a day, as well as a Tochka-U missile in the Kherson and Zaporozhye regions.
▪️Russian aviation destroyed up to 250 Ukrainian soldiers in the DPR with high-precision weapons. Fighters of the Russian Aerospace Forces destroyed a Ukrainian Mi-8 helicopter with saboteurs in the Kherson region
▪️The RF Armed Forces with precision strikes on the 65th mechanized and 68th infantry jaeger brigades in Novoselivka and Dobropolye, Zaporozhye region, destroyed up to 70 Ukrainian militants and five units of military equipment
▪️Putin discussed by phone with UN Secretary General Guterres the situation around the Zaporozhye nuclear power plant, the upcoming trip of the UN mission to investigate the facts of the shelling of the pre-trial detention center in Yelenovka, as well as the progress of the food deal. Putin and Guterres agreed on further work on the Russia-UN line at various levels
▪️The Russian Federation believes that the Western “curators of Kyiv” will not agree to a peaceful settlement of the Ukrainian conflict and will continue to push it to new suicidal adventures, said Russian Ambassador to Washington Antonov
▪️”The Russian Federation will not support the decision to allow Zelensky to send a rewritten appeal to the General Assembly, since a virtual speech is a violation of the rules” -  Nebenzya.

The Russian army is attacking in the Donetsk direction – the main thing from the AFU General Staff summary:

Military expert Boris Rozhin on the highlights of Russia’s special military operation in Ukraine as of 22.15 Moscow time on 14.09.2022 specifically for Voenkor Kotenok Z @voenkorKotenok channel:

1. Front on Oskol and Kupiansk – no significant changes. There are signs of stabilization here so far.

2. Yampol and Krasny Liman are holding steady.
Fighting continues at the AFU bridgehead on the northern bank of the Seversky Donets.

3. Sviatogorsk remains in the disputed zone. Neither side declares control over the city.

4. Near the border with Belgorod oblast, the Ukrainian armed forces have undertaken a few shelling incidents, but for now they are concentrating on strengthening the front at Oskol and occupying the remaining unoccupied settlements. Today they officially announced the occupation of Izyum.

5. Attempts by the enemy to take Belogorovka were unsuccessful, but fighting there continues, as well as at Verkhnekamenskoye and Ivano-Daryevka.
Street fighting in Soledar.

6. Near Artemivsk, our troops are expanding their zone of control around Kodoma and on the Artemivsk-Dzerzhinsk highway. There are battles for the fortifications covering Zaitsevo.

7. There is no change in the Donetsk direction, as well as in Marinka and Ugledar.

8. The enemy is building up its grouping in the Zaporizhia direction. Attempts to hit Vasilievka and Tokmak are not ruled out.

9. There are no significant changes in the Mykolaiv direction. The reports on the capture of Kiselevka by the Ukrainian Armed Forces are a common fake. There is also no significant progress by the Ukrainian armed forces at the Andriyivska bridgehead. Moreover, the destruction of the Karachun dam is causing problems for the AFU crossings on the Ingulets river.

The situation on the Oskol front. The enemy is trying to probe our defenses from Chervonyi Oskol to Lisichansk. Large enemy forces supported by artillery are trying to attack one section and another. They act competently, the Izyum warriors are holding out, but the situation is very tense. Khohol is advancing from all sides, attacking from Sviatogorsk and Kupiansk, attacking in large numbers. Now Kiev has brought in almost all of its reserves.

Over 5000 dead in the Kharkov offensive

The commander of the Akhmat special forces of the Interior Ministry of the Chechen Republic, Apty Alaudinov, has said that the number of the Ukrainian army group that advanced in the Kharkov Region (in particular on Balakleya) was over 30,000.

According to preliminary estimates, Kiev lost over 5,000 dead in this counter-offensive.

@VysokyGovorit (Starshe Eddy) comments on the situation along the Oskol front:

1—The situation on the Oskol front: The enemy is trying to probe our defences all the way from Chervonyi Oskol to Lisichansk. Large enemy forces supported by artillery are trying to attack one section and another. They act competently, the Izyum warriors are holding out, but the situation is very tense. The Khohol is advancing from all sides, attacking from Svyatogorsk and Kupyansk, attacking in large numbers. Apparently now Kiev has brought in almost all of its reserves.

The fact that the Khohol has brought in all reserves and has finally started to implement the main solution to its ambitious task is more a feeling than any concrete data. But in war it is often better to trust a gut feeling than to say: Go there, we have checked, there is no one there.

Now is the time to “calibrate” as much enemy infrastructure as possible from Lvov to Kharkov. Let them sit in flooded cities knee-deep in shit, without electricity and with stopped railways. The luxury war with internet and warm flats should pass into oblivion.

Zaporozhye Front: Details of a breakthrough attempt near Nesterianka

In the morning of September 14, units from the 65th Motorized Infantry Brigade of the insurgent AFU attempted to break through the defenses of the units of the 503rd Motorized Rifle Regiment of the 19th Motorized Rifle Division near the settlement of Nesterianka, Zaporozhye region.

Three unsuccessful attempts to break through our defence, thanks to skilful action of artillery calculations and fire of motorized rifle units, and the advancing enemy was stopped, suffered heavy losses and retreated to their positions. As a result of the battle, an enemy tank was destroyed by RPG fire, and while crew of it survived, they were abandoned by fellow soldiers who fled the battlefield.

As a result of the engagement, Zelensky’s fighters lost more than 50 men as killed. Three tanks and three American-made M113 APCs were destroyed, and seven men were taken prisoner, one of whom was an officer.

The interrogation of the captives established that the units were poorly staffed—most of them were reservists who had not received even minimal training and were thrown into combat as cannon fodder.

Slowly, awkwardly, with groaning and creaking, but increasingly gaining momentum, the massive Russian military and political colossus is turning to face the enemy, all the while inside its armoured chest the elite rabble, clad in soiled Armani suits and sweat-soaked collared herringbone shirts with diamond pins, reeking of fear and uncertainty, clamouring with a multitude of breaking terrified voices, desperately clutches at the steering wheel, trying to wrestle it away from the fatalistic hand of the grim Russian people.

One more half turn, and the unstoppable movement will throw with centrifulgal force the soft bodies and brittle bones of the comprador class against the iron walls of the Russian heart, smearing their rotting remains into a stain of shame, memory, and monument to the past that must never be forgotten, lest repeated.

Moscow has sent the EU in a Knockout in the Economic War! EU has Buried Another of Its Industries!