“A number of sources refute the abandonment of the Russian Armed Forces of part of Kupyansk on the left bank of the Oskol. It is noted that there are clashes with enemy DRGs.

In any case, this part of the city finds itself in a “gray zone”, like Svyatogorsk, as Boris Rozhin points out.

But the situation is complicated, because The initiative is on the side of the enemy attacking our positions in the Kupyansk area. In this direction, the enemy seeks to realize superiority in manpower, trying to advance and gain a foothold on new frontiers.”

- The headquarters and training base of a separate special operations center Yug has been destroyed near Ochakov (Mykolaiv Region);
- Near Dvurechnaya and Kupyansk, Kharkiv region, strikes were carried out on the temporary deployment points of the 66th mechanized brigade of the Ukrainian Armed Forces;
- In Kharkiv, a Kraken deployment point was hit;
- In total, more than 400 Ukrainian fighters have been eliminated during the day;
- Operational and army aviation, missile forces, and artillery strikes hit 317 targets, including the Osa-AKM SAM system near Soledar;
- Five Ukrainian UAVs were shot down;
- Over the DNR, Kherson, and Zaporizhzhia regions, 53 HIMARS and Olha MLRS shells were intercepted.

“By the way, I know about a couple of mass graves around Izyum, which Zelensky is talking about now, playing a new Bucha.

These are the twin graves of those whom the Kyiv commanders refused to take. Near Suligovka, Dolgenkiy, Kamyshevakha.

At that time, the Ukrainian command was contacted via communication, offered a humanitarian pause, and guaranteed security. Just take your corpses. In response, only mats.

What was left was collected and buried in common graves.”
https://t.me/sashakots/35694

Yes, actually, we published videos from those places back in May. Exactly the situation that a colleague is talking about – the bodies of the fighters of the Armed Forces of Ukraine were thrown by their own command in the fields to be eaten by animals. Ours took out the bodies of dead enemies under enemy fire. Because for the Russian enemy, he is still an enemy with weapons.

And they were buried in mass graves only because the Ukrainian military refused to take the bodies.
In general, I have a suspicion that now the exhumation is taking place in the very place that appears on the May video.

Donbass offensive: the situation in eastern Ukraine By the end of 16 September 2022.

▪️Overnight, Ukrainian shelling has produced massive shelling of the town of Valuiki in the Belgorod region, killing one civilian and wounding several others.

Some of the shells hit an electrical substation, temporarily depriving the town of power.

▪️Artillery duels continue in the north of the region: Russian units have worked off targets near Volchansk, Kazachya Lopan, Goptovka, and Zolochiv.

▪️Ukrainian authorities carry out filtration measures in Balakleya, Izyum, and other seized territories, cracking down on locals who collaborated with the Russian Armed Forces.

▪️Video of AFU fighters in the eastern part of Kupyansk emerged in the afternoon. According to local sources, it was a Ukrainian sabotage group that was later driven back to the right bank of the Oskol River.

Information about the crossing of the main AFU forces and full capture of the town has not been confirmed.

▪️Units of the allied forces are fighting on the outskirts of Soledar, Bakhmut (Artemivsk), as well as near Zaitsevo and Spornoye.

▪️DPR People’s Militia clashes with the enemy continue in Donetsk suburbs near Krasnogorovka and Pervomayskoye.

▪️Overnight, units of the 65th AFU brigade again attempted to advance on the RFU positions from Orekhovo, but suffered losses and retreated to their initial positions.

▪️Russian artillery struck identified targets in Nikopol, Marganets, and other settlements on the right bank of the Kakhovka reservoir.

▪️ In Berdyansk, Ukrainian terrorists killed the deputy head of the Ukrainian state administration for housing and utilities, Oleh Boyko. His wife Lyudmyla Boyko, who was the chairman of the city’s territorial election commission, was killed along with him.

▪️The Ukrainian command continues to pull additional forces to this section of the front to attempt a further offensive against Russian Armed Forces positions. 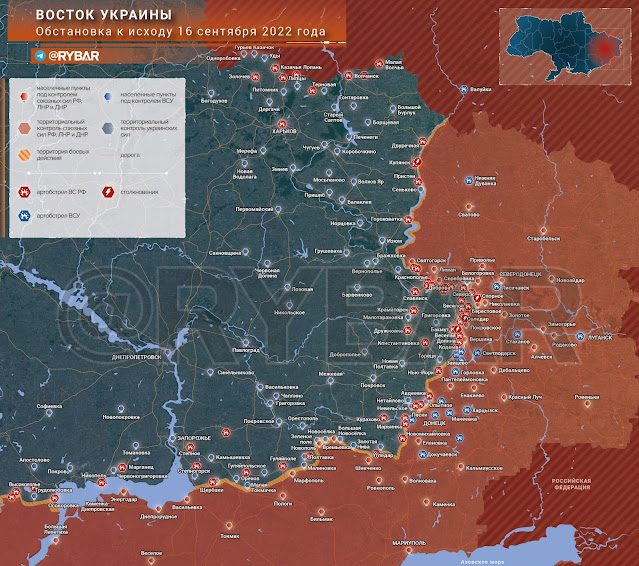 #YURI The remaining Ukrainian troops on the Andreevka bridgehead, cut off by the risen Ingulets river is methodically destroyed by the Russian artillery and heavy flamethrower systems. Another attack on Kherson direction was let some kilometres deep into the defense lines, surrounded and destroyed. The calm on Zaporozhye direction continues, Yuri supposes that the Ukrainian command, knowing that an offensive there won’t be an easy walk, don’t dare to attack, despite being taunted to try that by Putin himself.

There are unconfirmed reports though that the Russian defense line on Oskol river might have been breached, but so far no reliable confirmation of that exists, the situation is expected become clear tomorrow. If confirmed, it is quite serious, Yuri says.

Monotonous and routine work of dismantling of enemy defenses continues near Donetsk. State of the fronts as of Sep, 16, 19:00 CEST

Military expert Boris Rozhin on the highlights of Russia’s special military operation in Ukraine as of 23.01 Moscow time on 16.09.2022 specifically for Voenkor Kotenok Z @voenkorKotenok channel:

1. There are no changes in the Avdeevka direction.
The fighting is positional.
Near Marinka and Ugledar – no significant changes.

3. Street fighting in Soledar.
In the area of Belogorovka and Sporny, the enemy continues to attack, trying to advance in the direction of the Lisichansk agglomeration.

4. Yampol and Krasny Liman are held by the RF Armed Forces. Enemy attacks were unsuccessful. Svyatogorsk remains in the grey zone. Fighting was reported near Drobyshevo.

5. On Oskol, the enemy is pressing on Studenok and Sosnovoye. The front can be expected to retreat to the Yatskovka/Rubtsy-Alexandrovka-Drobyshevo line if necessary.

6. In Kupyansk, enemy DRGs are roaming around the eastern part of the city, but it is reported that our troops have not yet withdrawn from Kupiansk. The situation with Sviatogorsk is repeated, with part of the town just standing empty.

7. In Zaporozhye oblast the enemy probed for opportunities to attack in the direction of Vasylivka and Tokmak, suffering casualties without much result.

8. In the Kherson sector the enemy attacked near Pravdino, suffered heavy losses in equipment, and achieved no success.

In the Posad-Pokrovsky sector – no change, as well as in the Andreevka bridgehead – there the enemy is trying to rotate tattered troops and solve engineering problems with the crossings after the water level in the Ingulets river has risen.

Russian President Vladimir Putin on the course of SMO:

1) SMO is not a warning but a special military operation;
2) We see attempts to carry out terrorist attacks, we do respond with restraint, but for the time being;
3) The recent strikes were a warning;
4) Russia is not fighting the whole army, but only the contractual part;
5) The position of the Kiev authorities changes every day;
6) Zelensky is not ready ore willing to talk to Russia, don’t want to, don’t do it;
7) Kiev has announced a counter-offensive – flag in hand, let’s see where it ends up;
8) The special operation plan is not subject to adjustments, operational decisions are made as they go along;
9) The offensive operation does not stop, but we are in no hurry;
10) Kiev’s methods are no different from those of terrorists.

Currently, it is premature to launch strikes on decision-making centers. This opinion was expressed by military expert Vasyl Dandykin to the Idi i Vzglyad channel.

We are hitting the energy sector, and dams. With these attacks, we have shown what we are capable of. I think this is a kind of warning that will affect not only Kiev but also London and Brussels,” Dandykin said.

He recalled that the decision to hit the decision-making centers would be made by the leadership based on necessity and military and political expediency.

ðŸ’¬”All in the right time,” he added.

“Russia is trying to win the war as slowly as possible”

Oleg Tsarev: Bucha-2: Zelensky announced that a mass grave of people, torture chambers were found in Izyum, and he urgently calls journalists and representatives of international structures to the city. Expected.
Due to the access to the Russian borders, the AFU now has the opportunity to shell Russian cities, which is happening now. Now we need to organize a new line of defense.
The recent retreat is a blow to Russia’s international status. A blow to the reputation of our army in the eyes of the citizens of the Russian Federation. This is an increase in the supply of weapons to Ukraine and its financing from abroad. A wake-up call for residents of the recently liberated territories. Fear and suffering for the supporters we left behind in the Kharkiv region.
You have to pay for everything. You have to pay for the offensive. And for the retreat, too. It is only necessary to understand that the price of retreat is many times higher than the price of the offensive. Unfortunately, we will pay for the retreat in full.
But this is not the main thing. We’ve only lost one battle. The main thing to understand now is that the price of defeat in the entire war is many times higher than the price, even if not a small one, that we are ready to pay for Victory.
I wrote this for those who are still thinking that it might be better to give up. https://t.me/olegtsarov/3442

SCOTT RITTER: This Is What Happened in Kharkiv

There are no Neo Nazis in Ukraine!!! Except there are