The AFU command continues preparations for further development of the offensive and probes the Russian defences on the left bank of the Seversky Donets.

▪️ Assault groups of the 81st Airborne Brigade conducted a reconnaissance battle near #Drobyshevo. AFU reconnaissance teams revealed the locations of forts and the number of people in this section of the front. It is likely that the soldiers of the 81st Brigade will make another attempt to capture the settlement during the night.

▪️ More Ukrainian units continue to be moved via a pontoon to #Svyatogorsk to reinforce the troop grouping and limit the actions of Russian forces towards #Aleksandrovka.

▪️ On the #Bogorodichnoye — #Tatyanovka — #Prishib line, servicemen of the 95th Brigade  have crossed the #Severskiy Donets in inflatable boats and occupied a bridgehead on the opposite bank. The Ukrainian units are now waiting for the main forces to approach.

▪️ Russian forces have broken through a section of AFU defences southeast of the settlement in a counter-offensive near #Lyman. Ukrainian units retreated to the Seversky Donets area.

▪️ The Ukrainian command set up pontoon crossings across the #Oskol river to provide communications and logistical support to the group advancing on #Svatovo with rear support in #Izyum. 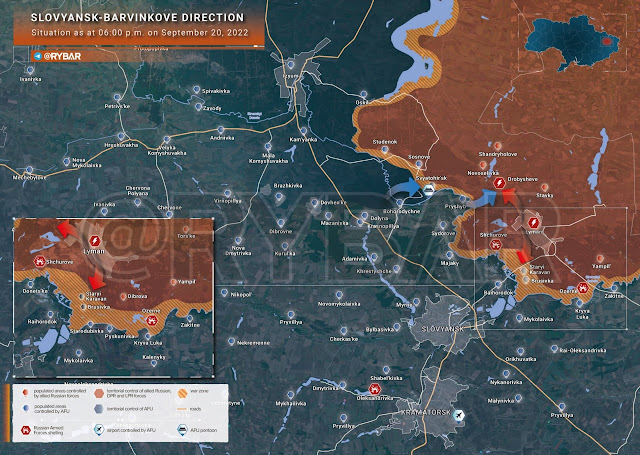 The AFU is concentrating forces to throw at Melitopol.

At the moment, according to the Military Chronicle, the AFU are creating an offensive fist near Orekhovo, Kamyshevakha and Gulyai-Pole to throw at Melitopol.

The fist consists of:

· assault units of the 65th Brigade. This brigade has suffered significant losses over the past two months, but has been reinforced by reservists;

· joint units of the 9th Separate Motorized Infantry Brigade and the 23rd separate motorized infantry battalion “Khortytsia”. Deployed a little further — in the area of the localities of Stepnogorsk and Novoyakovlevka;

· units of the 43rd and 45th separate artillery brigades of the Armed Forces of Ukraine. Stationed near the localities of Novoboykovskoye and Magdalinovka. Equipped with several dozen American M777A2 howitzers and HIMARS multiple launch rocket systems;

The primary target of a possible attack by the AFU in this direction is the M-14 highway and the Bilmak — Melitopol railway line. If these can be blocked, then the Allied forces will lose some of the opportunities for maneuvering in this sector of the front.

The Armed Forces of the Russian Federation and the People’s Militia of the DPR have erected at least two lines of defense in the Melitopol direction. Additionally, several tank battalions have been deployed to these areas equipped with T-80BVM, T-90M and T-72B3M tanks.

Ukrainians attacking Lyman from the north

Going by some reports, The Ukr are transferring reinforcements to the Kharkov region where fierce fighting is reported at Kupanjansk.

The battle for Kupyansk is in full swing: information about the withdrawal of our partially confirmed
For more than a week, this city in the Kharkiv region was divided: the western part of the APU, the eastern part is behind us.
The other day, our troops left several neighborhoods in the eastern part, which were subjected to the most destructive artillery fire of the Armed Forces of Ukraine.
After the APU’s approach, our troops launched a counterattack, driving the enemy into a bag.
▪️ There are urban battles with the use of tanks and artillery.
Special forces attacked and directed artillery several times (https://t.me/RVvoenkor/25910 ) on the forces of the Armed Forces of Ukraine during their attempts to force the Oskol River near Kupyansk.
The General Staff of the Armed Forces of Ukraine does not declare the capture of the city of the Armed Forces of Ukraine, but reports in reports on the shelling by the Russian army in this area.
▪️ French Le monde has published an article (https://t.me/RVvoenkor/26522 ) that the Russian army is holding back the Ukrainian counteroffensive in the Kupyansk area, continuing to hold the railway junction and repel the onslaught of the Ukrainian Armed Forces in this direction.
t.me/RVvoenkor

Battle for Liman: Special Forces “ðŸ…¾️ group” destroy ammunition depot of advancing AFU forces
Group O fighters, who arrived to help in this hottest section of the front, destroy the enemy. Special Forces in the course of the raid discovered and destroyed with the help of artillery the ammunition warehouse of the militants, recently moved by the Nazis to provide the advanced units advancing on Krasny Liman. #exclusive from the front

The referendums on joining Russia will be held in the DPR / LPR / Zaporozhye & Kherson regions between 23 – 27 of September.

A full scale mobilisation in Russia is pretty unlikely but some sort of partial mobilisation and possibly declaration of martial law in some districts (probably some border areas) is being mentioned in some reports.

The Russian army launched a series of missile strikes on the Pechenezh reservoir dam in the Kharkov region
▪️ This has just been reported by local resources.
In the village of Pechenegi, the Armed Forces of the Russian Federation tried to destroy the dam of the Pechenezh reservoir,” the General Staff of the Armed Forces of Ukraine said before that.
▪️ Yesterday and today, the Russians hit the dam in Pecheneg with rockets, there is a threat of damage to the dam, – said Natalia Popova, Adviser to the head of the Kharkiv Regional Council.

Dugin says that HIMARS hitting Zaporozhie NPP at the initiative of “American informers” can be interpreted by Russia “as an attempted nuclear attack on Russia.” t.me/asbmil

Wagner PMC says Kiev is transferring all its forces for a decisive attack on Russian Armed Forces. Apparently, even forces from Kiev are being mobilized

We can confirm that Kiev troops are on the move towards Kharkov as well. For the first time, Ukraine is using its Kiev reserves that are kept there to protect the capital. Either a confident move or a desperate last effort push to recapture Severodonetsk and Lisichansk

Head of Chechnya Kadyrov says:  “That’s it. Let’s move on to a new tactic of a special operation against the Ukronazis. We ain’t gonna deal with them anymore. Discussed all the details with Magomed Daudov, the Chief of the Operational Headquarters of the Chechen Republic.

The enemy will soon face the most difficult consequences for themselves as part of the new plan of retribution.

All of Russia’s previous actions will now seem like childish pranks to them.

Bandera, you have a limited time left for rest, then it will be very, very bad.

Take these words as you like, treat them as you please, but remember them just as you memorized the slogan “AKHMAT SILA”.

Only those who will treat this message as an unkind sign for themselves and make balanced conclusions for salvation will be lucky. Get ready and keep your eyes peeled.”

Based on Kadyrov’s report, it’s pretty clear that Putin will announce a major escalation of Russian Armed Forces engagement in Ukraine. After all, Erdogan was right when he said after meeting with Putin that Putin is looking to finish the war ASAP. Kadyrov suggests unprecedented display of power by Russian Armed Forces starting tomorrow (presumably tomorrow)

Sources of a number of publications claim that the air grids of Russian TV channels and radio stations are being rebuilt for the urgent morning release of the president’s address to the country.

BREAKING – British Intelligence reports they have Intelligence that Russia is shifting to a more Aggressive stance and moving to a war economy to get a proper war footing.

“Any attacks by Kiev’s forces following the referendum results will be regarded as aggression against the Russian Federation .” – Senator Kovitidi

The appeal to the public recorded by Putin will be shown on September 21, when the Far East “wakes up” – Forbes, citing “sources in the Presidential Administration”

In a month or two world may enter into a conflict that has not been seen since the Second World War, expect West’s relations with Russia and China to worsen and conflict to expand to a global level –

In the event of a declaration of war, Belarus will be obliged to support Russia — this is assumed by collective agreements between the states
in accordance with the norms of the collective security treaty.

Russia and Belarus are united by many agreements on mutual support, including in the military sphere.
We remind that today Lukashenka instructed to start preparing for the defense of the state in accordance with the norms of wartime. The Security Council of the Republic is preparing a series of measures to check the combat readiness of all armed forces and their readiness to “go on alert according to the norms of wartime”.

Macron tried calling Putin apparently several times after the news on the referendums but was told Putin is busy….Macron however says that he will maintain communication with Moscow and expects to speak to Putin soon

Dugin: A very important and, apparently, not easily given decision was made. All our – unbearable, outrageous – sacrifices are not in vain. The state and the people are on the same side of the barricades. And on the opposite side – an absolute enemy.

It is important not to lose your soul even in the most furious and cruel battle with a brutal enemy. We are fighting on the side of God and Heaven, on the side of Earth and Soul. For this, our native blood is given, flowing directly from Russian hearts …

RT chief Simonyan: Judging by what is happening and still about to happen, this week marks either the eve of our imminent victory, or the eve of nuclear war.

I can’t see a third option

The National Interest: Russia could inflict psychological defeat on Ukraine

The American The National Interest, meanwhile, reports that Russia is preparing for a serious blow, which could become a prelude to disaster, and the successes of the Armed Forces of Ukraine in the Kharkov direction are greatly exaggerated.

According to Carpenter’s analyst, the Russian Federation may seize Odessa, which will inflict a psychological and economic defeat on Ukraine.

In addition, the RF Armed Forces may launch an offensive in the northeast and encircle the Armed Forces of Ukraine, the publication suggests.

Ex-Ambassador of Ukraine to Germany Melnyk threatened members of the Bundestag with criminal liability .

Earlier, the German deputies from the party “Alternative for Germany” has announced plans to visit Russia and Donbass to produce an opinion on the situation .

According to Melnik, such intentions are a criminal offense .

He published a list of these deputies and ordered the head of the German Office for the Protection of the Constitution, Thomas Haldenwang, to act. threatened members of the Bundestag with criminal liability .

How long will the US financial support for Ukraine last?

Aiden Aslin and Shaun Pinner Have Been EXECUTED According To Russian News Source.