ðŸ”»Border territories of the Russian Federation:

▪️Ukrainian formations fired at the villages of Shelayevo and Voznesenskoye in the Belgorod region, no one was injured.

▪️The Armed Forces of Ukraine continue to try to take control of Drobyshevo, which is one of the key communication hubs northwest of Liman. Another attempt by the enemy to occupy the settlement was met with intense artillery fire, as a result of which the Ukrainian units retreated.

▪️In an effort to encircle the Russian Armed Forces, the Ukrainian formations tried to break through the front in the area of ​​Redkodub and Karpovka, but suffered losses and retreated to their original positions.

▪️ Positional battles continue in the area of ​​​​Disputed, Belogorovka and Verkhnekamensky, as well as on the outskirts of Bakhmut and Soledar.

▪️ Detachments of “PMC Wagner” continue their offensive in order to reach the southern outskirts of Bakhmut (Artyomovsk).

▪️Ukrainian troops with the help of the HIMARS MLRS fired at the settlements of the Luhansk People’s Republic, including Lisichansk, Gorskoe, Stakhanov, Rubizhne, Svatovo and Alchevsk.

▪️In the morning, the RF Armed Forces attacked targets in Zaporozhye: the places of temporary deployment of the Chaika tactical group and the nationalist battalions Skif, Dnepr and Gepard were hit, as well as the location of the Armed Forces of Ukraine in the Ural barracks in Zaporozhye.

▪️Artillery duels continue along the entire line of contact. 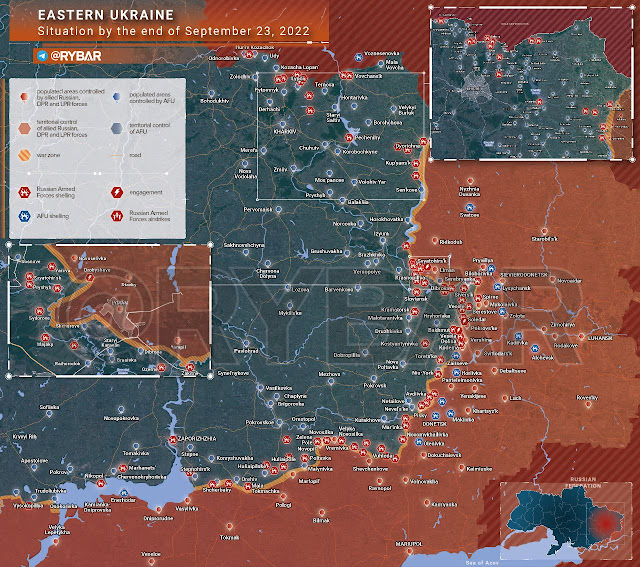 An enemy determined to break through to the Russian border: Brave fighters show massive heroism in battle near Tavolzhanka

Russian fighters from the “O” group have detected two battalion tactical groups with a total number of over 2,000 fighters attempting to break through the defenses near Tavolzhanka. The Ukrainian armed forces aim to break through to Svatove and the border with Russia.
Our fighters were almost 10 times fewer, but they did not abandon their positions and took the fight to the superior forces of the enemy.
The Russian units engaged in a defensive battle were actively supported by aviation and artillery, delivering massive blows to the advancing Nazis.
As a result of heavy fighting, the enemy was driven back and a large number of AFU vehicles and fighters were destroyed 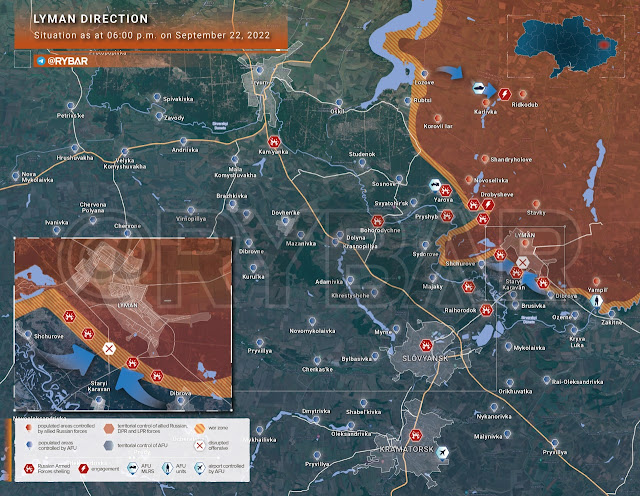 Ukrainian formations are developing an offensive against the positions of the Russian Armed Forces on the eastern bank of the Oskol River. The key task is the capture of the Lyman,Svatovo and the offensive deep into the Luhansk People’s Republic.

The Ukrainian armored group broke through the front to the northwest of Lyman. AFU motorized infantry from the villages of Rubtsi and Lozove wedged into the defensive formations of the Armed Forces of the Russian Federation in the area of Redkodub and Karlivka.

The Ukrainian armored group managed to be detected in a timely manner by means of aerial reconnaissance: a powerful fire defeat was inflicted on it.

At the moment, fighting is taking place in the fields between the villages of Karlivka and Lozove. The AFU does not abandon attempts to surround Lyman. P.S. No panic,they are demilitarised every day on industrial scale…

Just my opinion, not of the channel. It’s relatively quiet in the front now. Everyone is regrouping. A big showdown awaits us. Yes, yes, we all know that. I didn’t tell anything new. But I would like to talk about the future. There is absolutely no doubt that Ukraine will be destroyed. Much, or a little less than expected remains to be seen. Will it continue to exist? Probably, although not in this form. But tackling another problem is of extreme importance. Nazis. They showed up in Ukraine. Where did they come from? The problem lies in years after the break up of the USSR. Newly created states, some of them, Baltic ones, openly showed their anti-Russian sentiment. Some would say, yeah, they did, but they had a hard time under communism. They are partially right. But that was because of the mistakes of communists. United people of the former great socialist giant was an illusion. Baltic states in secret, and after the break up of the Union, started to show what they really are. Former nazi colonies, which helped willingly and gladly in the extermination of their own Jewish population and Slavic people. They were helping Germans, not only in death squads but as combat soldiers on the front. And nothing less than in SS troops. Especially Latvia and Estonia. They began with public marches of former SS veterans, mocking WW2 Soviet and Allied people’s heroism and praising the killers. And, year by year, those things continued unopposed and unsanctioned blatantly by Europe and the rest of the world except Russia. They were on national televisions, represented as heroic defenders against wild hordes from the east. Orcs, as they call us today. Imagine, SS murderers of women, children, and old people were heroes for them. And they still marching. Normally, cancer was spreading. It’s in his nature. Their history was falsified, and they show others how you can be falsely special. And they found a breeding ground in Ukraine, devastated by bad privatization, bad standard, the fall of the self-esteem of people, and stolen money from elites. By accepting nazism, they started to think better of themselves. That they are special, chosen, and whatnot…They started falsifying their school books. The scenario was always the same. And that was the biggest mistake of communism. They thought that those people can redeem themselves. And they didn’t clean them to the end. Civilization was fair to the nazis. They listen to their arguments in Nuremberg and subsequent trials and then, mainly hung and shot them, thus ending that argument. Soviets failed to do so. Now, Russia must finish the job. After Ukraine, the Baltic states deserved to be visited and denazify once and for all.

Military expert Boris Rozhin on the highlights of Russia’s special military operation in Ukraine as of 22.55 Moscow time on 23.09.2022 specifically for Voenkor Kotenok Z @voenkorKotenok channel:

1. In the Krasny Liman area, the enemy continued to press on Krasny Liman, Yampol, and Drobyshevo directly and also attempted to bypass our troops’ positions through the forested area near Sviatogorsk and Yarovaya. Serious fighting continued.

2. In the Oskol area, the enemy continued to press in the direction of Rubtsy and Redkodub. The aim is quite trivial – to break the integrity of the front from Kupyansk to Krasny Liman and force our troops to retreat to the LNR borders with subsequent attempts to pressurize Svatovo.

3. Position fighting continued near Kupiansk. To the north of Kupiansk, the enemy attempted to attack close to the border, but suffered losses and did not succeed. Nevertheless, a continuation here is sure to follow.

4. Near Artemivsk, the Wagner Group continued to storm Zaitsevo and enemy strongholds along the Artemivsk-Dzerzhinsk highway.
There is no change in Soledar.
Fighting also continues for the ruins of Sporny.

5. The enemy launched a rather powerful attack near Marinka. It suffered losses and had no success. In Ugledar and Avdeevka directions – no significant changes.

6. Positional fighting continued in the Nikolayev and Krivoy Rog areas near Posad-Pokrovsk and Sukhoy Stavka.
Fighting also continued near Olginka and Arkhangelskoye.

“Friends, I am watching with interest and pride how a referendum on the future of these regions started in the DPR, LPR, as well as the Zaporozhye and Kherson regions. This is a long awaited event! We remember how the inhabitants of the Chechen Republic at the beginning of the 2000s were waiting for a referendum in the same way in order to put an end to the bloodshed and become full-fledged citizens of Russia. It is happened. And anyone can see how our region flourished after this significant event. After the referendum, we have peace. We began to live, not survive, we built cities and now we live in complete safety. I am sure that the residents of Donbass, Zaporozhye and Kherson will make the same right choice for their future. Russia does not abandon its own people and will do everything possible to make its citizens feel safe. I congratulate Denis Vladimirovich Pushilin and Leonid Ivanovich Pasechnik on this important and responsible event in the lives of several million people! A great and wonderful future is only possible with Russia! This will be the only right choice!”- Ramzan Kadyrov, Hero of the Russian Federation.

A Russian (Iranian-made) kamikaze drone flies over Odessa and then hits it.