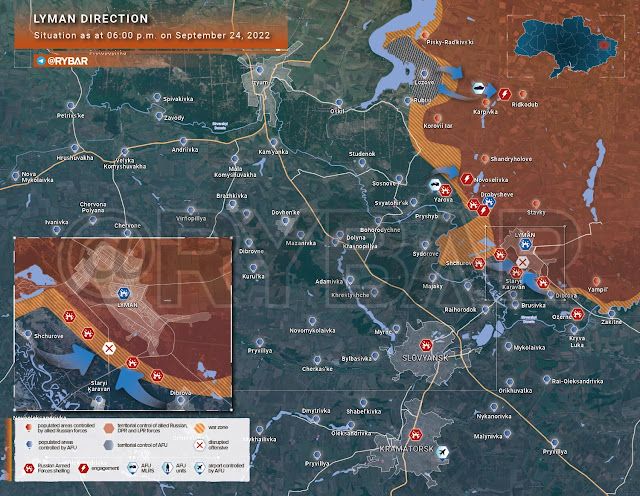 @rybar The situation in the Lyman direction as of 18.00 on September 24

The AFU is trying to develop an offensive against the positions of the Russian Armed Forces on the eastern bank of the Oskol River. However, the units of the 20th army not only restrained the AFU’s attacks, but also threw him back to his original lines.

AFU motorized infantry tried to re-attack Russian positions in the area of Redkodub and Karpovka from Lozovoye, but was pushed back to their original positions.

In the fields west of Koroviy Yar and Karlovka, there are counter battles of mobile groups of the Armed Forces of the Russian Federation and the AFU.

The village of Drobyshevo and the surrounding villages are held by reservists from BARS-13, who previously fought in the vicinity of Bogorodichny. During four days of active fighting, the AFU failed to break through the front. AFU units have gained a foothold in the development of the village of Novoselovka. In Novoselovka and Drobyshevo, the AFU delivers artillery and missile strikes, phosphorus ammunition is used. There are heavy positional battles.

The Russian Army is stepping up efforts to liberate the territories of the DPR — the main thing from the summary of the General Staff of the Armed Forces of Ukraine:

▪️The Armed Forces of the Russian Federation are conducting assault operations in the areas of the settlements of Spornoye, Soledar, Artemovsk, Otradovka, Kurdyumovka, Zaitsevo, Mayorsk, Kamenka, Avdeevka and Opytne;

▪️The Russian troops carried out 5 missile and 14 air strikes, carried out more than 60 MLRS attacks onobjects on the territory of Ukraine

The Wargonzo project managed to get to Krasny Liman, which was taken into the semicircle, and find out what the real situation is in the city: the enemy was never able to take Drobyshevo and Redkodub, but militants of the terrorist group UG (“Ukrainian State”) regularly go to the southern outskirts of the city at night and conduct a gun battle.

Not a simple situation around Yampol and the situation there can critically affect the defense of Krasny Liman. But all the details, as always, only with us.

Another thing that needs to be said, the war will be very different once the new Russian Armed Forces troops touch down in Ukraine.

Up until now, majority.. and we mean a huge majority of the fighting was carried out by Wagner, Rusich and the people’s militias. Russian Armed Forces were carrying out a supportive role. They were in the background. They were providing air support, logistics and possibly artillery strikes, etc — like we said, they were in the background. Probably 70-150+ KM behind the front lines. (With some exceptions)

However, this time, as Kadyrov said — “the war will start now. Up until now it was child’s play” (or something along those lines, don’t recall the exact words he used) — and this is true.

Those who watch closely, nobody knows where Russian troops are in Ukraine. There’s no information about this. However the Russian MOD regularly includes divisions, battalions and units of the LPR/DPR in their reports and their areas of operations. There’s basically no information on Russian brigades and their place of deployment, because realistically — they are not deployed on the front lines. They play supportive and specialized roles.

This is all about to change now, it is going to be Russian army proper doing the fighting.

This will show in terms of operational security (unfortunately for us, this means the fog of war will be real because the leaks will be non existent), logistics and equipment, and highly likely — modern technology used on the battlefield in form of EW, drones & aviation.

Ukrainian air defense is still alive: why so and what will happen next?

In the afternoon, Ukrainian resources published a video of a Russian Su-34 bomber going on one engine: the authors claimed that the AFU managed to shoot down two Russian aircraft in one day.

Regardless of the veracity of the claims, the situation raises one extremely unpleasant question. Back during the AFU offensive in Kharkiv, we were often asked in feedback: why did the AFU only work on targets on the front line from extremely low altitudes, rather than bombing columns deep inside?

The reason is the Ukrainian air defense system is not suppressed. The command takes care of the planes and does not send them to bomb the enemy’s rear, and the crews have to “huddle” on the ground to avoid detection.

And do you know what the saddest thing is? Back in the beginning, the RF Armed Forces were comprehensively engaged in destroying Ukrainian air defenses, but for some unknown reason, they stopped this work completely.

In February and March, the air force was faced with the task of countering a powerful echelon anti-aircraft defense around the Ukrainian capital. For this purpose, there were permanently in the air long-range radar aircraft A-50U, jamming aircraft IL-22PP and Su-35S fighters with “anti-radar” missiles Kh-31P.

Some sort of inter-service cooperation was established: artillery and even Iskander SAMs were engaged to destroy the detected SAMs, which successfully hit the AFU S-300 complexes even in Kyiv’s built-up areas.

Yes, it was not without losses. Only one bomber regiment with Su-34s in March flew as far as Western Ukraine, destroying concentrations of manpower, command posts, and bridges deep in the rear in the Zhytomyr region. And for some reason, no Stingers or the British Starstrikes, favored by the TV talking heads, were a particular hindrance.

With the withdrawal of troops from near Kiev the successful experience of targeted suppression of air defense and its improvement was simply forgotten. Why? Alas, we have no logical answer.

ðŸ”» What will lead to further connivance in the suppression of Ukrainian air defense?

Let us repeat once again: the Russian Armed Forces have the technical and organizational capabilities to carry out this task. There are AWACS aircraft, there are REB aircraft, there are modern bombers, and there are anti-radar missiles. To the surprise of many, there are even gliding aerial bombs, which have already been used repeatedly by bomber crews.

Yes, all this is inferior to American or Israeli counterparts. But the ‘Kiev experience’ clearly demonstrates that everything is fundamentally solvable. Everything rests only in the unwillingness of the command to engage in purposeful suppression of the enemy’s air defenses.

And if this continues, not only will the air force be operating at a half capacity of its real capabilities, but it will also be losing costly modern aircraft. The stock of which is extremely limited by production capabilities.

It is time to finally remember the spring experience, make decisions at the control level of the entire air defense force, and launch a separate operation to destroy the remaining Ukrainian SAMs. With planning, inter-service cooperation, and allocation of forces and means.

Especially since very interesting items have recently arrived from Iran, which, with an adequate approach, make the task much easier. This opportunity should not be missed! https://t.me/rybar/39327

Russia’s Foreign Minister Sergei Lavrov Saturday addressed the 77th session of the United Nations General Assembly, during which Moscow’s representative discussed a range of issues, among them, the war in Ukraine, western sanctions, and the status of relations with Washington.

Lavrov to the question “Is the conflict in Ukraine turning into World War III, as feared by the Serbian president? I would not make gloomy predictions here. The entire territory of the Russian Federation [including the regions after the referendum] is definitely under the full protection of the state. And the laws, doctrines, concepts, and strategies of the Russian Federation apply to its entire territory.

Why a peaceful solution in Ukraine is IMPOSSIBLE.

The head of European diplomacy, Josep Borel, today said in his view a very wise point:

“There must be a diplomatic solution to the conflict that suits both sides”.

The Zuzha has completely lost his memory. There were already two agreements with the Nazi regime in Kiev, which at the time of their conclusion satisfied both parties. They were called Minsk-1 and Minsk-2.

But they satisfied Kiev until the “pill” they received the first time in August 2014 and the second time in February 2015 healed, and they began to consider themselves strong enough to wipe themselves with all these agreements.

It’s time to understand that there are no lasting agreements with the Nazis (just remember Munich 1938). All the agreements that are made with them are not worth a penny and are implemented just so long as they think they have become strong enough to wipe themselves with them.

“These people (*in the liberated areas), in fact, only react to what President Zelensky recommended to them in one of his interviews in August 2021. Then he advised everyone who feels Russian to leave for Russia for the benefit of their children and grandchildren. This is what they are doing now, moving to Russia taking with them their lands, on which their ancestors lived for centuries”

The State Duma reported that the process of accepting the DPR, LPR, Zaporozhye and Kherson regions into Russia could take place on September 30. That is next Friday. In principle, everything is within the framework of the previous statements of the Federation Council.

The enemy will now obviously throw all available reserves into the offensive in order to break through the front and disrupt the referendum in at least one of the areas. In addition, terrorist attacks and attempts at terrorist attacks in the liberated territories continue. I am sure that with the competent work of the military and special services, all this will not prevent the onset of historical and legal irreversibility as early as next week. But one should not underestimate the intentions of the enemy (primarily the US and NATO).

“Russia in the current situation will not take the first steps towards dialogue with the West,” Lavrov said

With the second day of voting underway RT continues with special coverage of the ongoing referendums in Donbass, Zaporozhye and Kherson on whether to join Russia with international observers monitoring the poll. Back on home soil – 55 captured military personnel from Russia and the Donbass republics, who were released in a prisoner swap with Ukraine, recount their ordeal.

NATO and the U.S. are in Shock! Iranian Drones Completely Disabled American Howitzers in Ukraine!