Trench Warfare in Bakhmut is HELL ON EARTH

1. Our troops retain the initiative here and continue their offensive.

2. The main battles are taking place outside #Opytnoye, south of #Artemovsk towards #Kurdyumovka, on the eastern outskirts of the city and to the northeast towards Krasnaya Gora.

3. There is currently no “encirclement” of the enemy in #Artemovsk. The enemy, despite heavy losses, continues to maintain the integrity of the front, regularly saturating it with transferred reserves, which are concentrated in the Chasov Yar area.

4. There is also no reason to believe that the enemy will respond in any way to the bizarre “ultimatums” being thrown around. The AFU command is well aware that if #Artemovsk is lost, the “Flower of Popasna 2.0″ will blossom there.

5. After the loss of #Opytnoye and the start of an assault on #Artemovsk, the enemy clearly expects to hold on to the eastern part of #Artemovsk for some time and then retreat to the western parts of the city. The bridge in the city centre has long been undermined. Should the city be lost, they will gradually retreat to Chasov Yar.

6. In the current realities, one might well agree with Prigozhin’s view that the more our troops shake up the enemy forces in #Artemovsk, the better.  (https://t.me/boris_rozhin/71435)

The Kiev regime is losing hundreds of soldiers daily in Bakhmut

The American edition of the New York Times reports heavy losses of Ukrainian troops near Bakhmut. Thus, they lost 240 servicemen wounded in one day alone, and 50 more in the second half of the next.

The Ukrainian military also complains about the intensive work of Russian artillery, which inflicts heavy losses on them.

Fighting for Bakhmut has been going on since the summer. The operation to liberate the town is being carried out by units of the Russian army, the LNR 2nd Army Corps, and fighters of the Wagner Group.

Highlights from the past 24 hours:

▪️ The Russian Armed Forces destroyed up to 100 foreign mercenaries and six armored vehicles near the DPR’s Chasov Yar settlement.

▪️ In the Kupyansk direction, the Russian artillery fire eliminated up to 30 Ukrops and two pickup trucks.

▪️ Nazi attempts to attack were thwarted in the Krasno-Limansky direction. As a result, up to 50 Ukrops were killed and wounded.

▪️ Up to 70 Nazis, two tanks, two armored fighting vehicles, and five pick-up trucks were eliminated in the Donetsk direction.

▪️ In the South Donetsk direction, up to 60 Ukrainians losses were sustained. 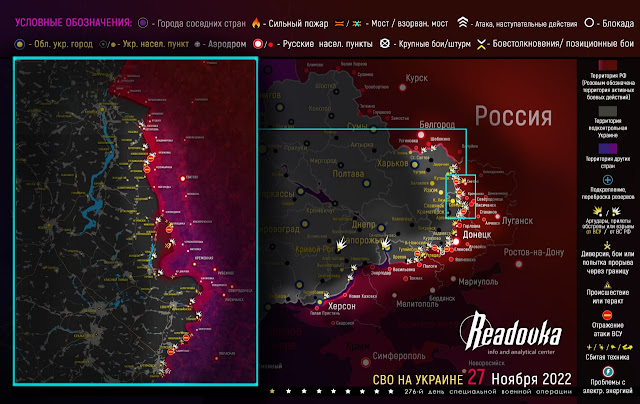 ▪️The Russian Defence Ministry has reported a strike on “foreign legion” strongholds in the DNR, with up to 100 mercenaries killed.

▪️Russian troops thwarted attempts by Ukrainian soldiers to attack in many directions, with a total of over 200 enemy casualties, the Defence Ministry has reported.

▪️The Russian Federal Customs Service has denied reports on the strengthening of customs control measures when importing goods to Russia for the needs of the special operation.

▪️Krivoy Rog authorities have reported a blow to the transport infrastructure facility. It later became known that the railway in the region had been halted for a long time.

▪️NYT reported that 20 out of 30 NATO countries had exhausted their ability to send weapons to Ukraine.

▪️The Vatican has said it is ready to provide a venue for talks on Ukraine.

▪️Stoltenberg admitted that support for Kiev was costly for Westerners but said it was necessary. 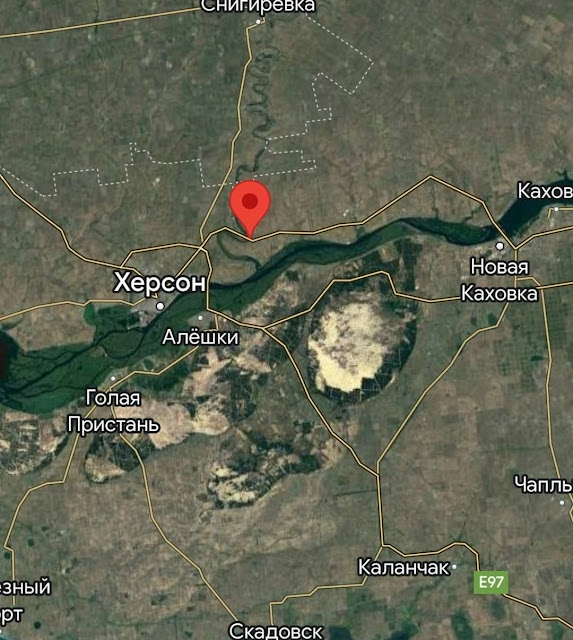 The AFU was able to cross the Ingulets River at Darievsky Bridge, which had previously been destroyed by the AFU when it withdrew its units from the right-bank part of Kherson Oblast.

When Dariev Bridge was under the control of the RF Armed Forces, it was probably the third most important bridge after Antonov Bridge and Kakhovka HPP, as it provided logistics from Crimea to Kherson to bypass the destroyed Antonov Bridge.

After the Antonov bridge was taken out of service, only the Kakhovka hydropower station could be used, but the Ukrainian Armed Forces also bombed the Darjevsky bridge. Unlike the Dnieper, it was a simple enough task to cross the Ingulets, which the RF Armed Forces did in its time.

Currently, the AFU crossing is in the same place where the AFU crossing was earlier set up. What does this give the AFU? It provides an uninterrupted logistical link between the Nikolaev and Krivoy Rog (Nikopol) directions. Thus, Kherson can now be supplied from both the Mykolaiv and Dnepropetrovsk sides.

This strike appears to be of a preventive nature in order to disrupt the redeployment of the 17th Tank Brigade, which is part of the Ukrainian troop grouping on the right bank of the Dnieper.
Thus, it is clearly seen that it was possible either to prevent the deployment of the strike grouping in the Zaporizhzhya direction, or to disrupt the transfer of serious reinforcements to the front line in Donbas.
At the same time, the main railway junction, via Dnepropetrovsk, continues to function and disabling it would have been very expedient.

Volodymyr Zelensky is hot again today, he is again performing in a T-shirt. And so much so that in the first 10 seconds of his evening address from a room with white walls, he repeated the word “tizhden” (week) three times.

Zelensky-”The beginning week can be as difficult as this outgoing one. Our defense forces are getting ready. The whole state is preparing. We are working on all scenarios, including with partners.”

VoA reports that Die Welt said their publication of “Zelensky dead after rocket strike” on 29nov2022, is a technical hiccup.

I wrote two contrasting posts earlier – one on Russian strength post-mobilization and one on the destruction of OC-South and Ukrainian strength following their Autumn counteroffensives.  In these I estimated Russia’s force allocated to Ukraine for operations this winter as above 500,000 soldiers, while Ukraine’s forces have been reduced to somewhat above 100,000 after a blood-soaked and decidedly Pyrrhic fall campaign.  The contrast in terms of equipment is equally stark – the Russians have if anything modernized their forces in the field with new production, with once-unknown T-90Ms becoming a common sight, while the Ukrainians are launching desultory attacks riding donated MRAPs.

Russia’s missile campaign against Ukraine’s critical infrastructure is close to success, with the power out in most of Ukraine most of the time and the country’s all-important railroads increasingly paralyzed.  This will prevent any rapid movement of Ukrainian forces around the country in response to Russian moves.  It is no coincidence that this campaign is reaching a crescendo as the mud season ends and the ground freezes, facilitating large-scale offensive action.

This is all recipe for a devastating winter offensive, in which the hollowed-out and practically immobile Ukrainian forces will simply be swept away in a devastating Russian onslaught.  The Russians have massed sufficient force to not only annihilate Ukraine’s front-line formations in the Donbass but also to penetrate into its strategic depth with enough strength to defeat the national reserves in Kiev and Galicia.

I suspect we’re in for a very hot winter.

Economic activity in Europe has collapsed to a minimum, – European Industrialists Roundtable

▪️Economic activity in Europe has collapsed amid a worsening energy crisis, record inflation and anti-Russian sanctions, the effect of which has not been as expected, the European Round Table of Industrialists (ERT) states

▪️32% of European CEOs plan to cut production, 15% plan to close their businesses

TRUTH About Life In Ukraine And Donbass From A REAL Journalist.

‘US Marine General Fights on the Side of PMC Wagner Group’: Russian Oligarch Yevgeny Prigozhin said