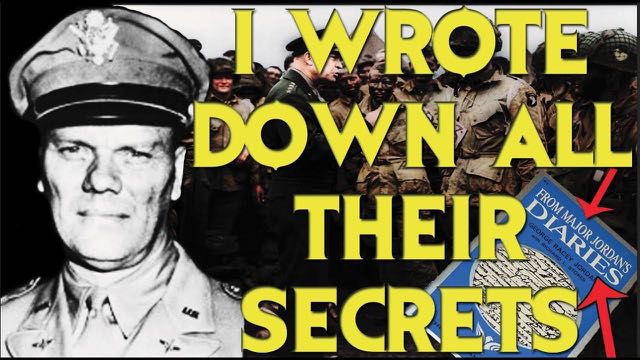 Speech from the 1960s. Major George Racey Jordan was responsible for facilitating the transfer of American Arms and Technology to the USSR during WWII under the Lend Lease Program. He kept a detailed diary including Primary Source documentation.. The bankers finance all sides.  George Racey Jordan (1898-1966) was an American military officer, businessman, lecturer, activist, and author.

Listen to the part “….they have the permission of the State Department…”, followed by, “…they’re taking scissors and cutting the word ‘secret’ off the top of all the documents…” Does any of that sound familiar? From the 1940′s and Harry Hopkins, to 2016 and Hillary Clinton… has anything changed?

EVERYTHING that is happening now with the destruction of America is DIRECTLY related to this disturbing information and the same Jewish Mafia that concocted COMMUNISM and the subversion of America in Jordan’s time has proceeded to this very hour with it’s goal of complete domination of the World with WASHINGTON D.C. as it’s primary source of POWER. Jordan had documented irrefutable proof explaining the complete subversion and overthrow of our Nation and the World by Jewish Communist Spies and Traitors in the U.S. government and THE AUDIENCE IS LAUGHING.  If the audience didn’t laugh, they would cry as this was a very serious situation in the 1940′s and the U.S. Government did nothing.  Nothing much has changed.

Link to Bitchute in case above YT video above is taken down.

A copy of the original book is in the Archive. archive.org/details/FromMajorJordansDiaries-TheTruthAboutTheUsAndUssr

See Major Jordan being promoted by a Soviet officer https://www.findagrave.com/memorial/49240677/george-racey-jordan

Like today 2 stories emerged of the ‘theft of Uranium’ The ‘MSM’ media version of a bottle of Uranium and the manhunt for it, but then Major Jordan Raceys bewilderment (as Russia had been the US ally in WW2, before becoming the new Soviet threat) which in this book & audio above which is the Major speaking. (i.e. like today and the Uranium 1 scandal with Russia & Canada and Hillary Clinton https://www.forbes.com/sites/jamesconca/2018/12/13/russian-uranium-one-deal-and-hillary-clinton-in-the-news-again/ )

Relating his brave decision to note everything down, how did Nuclear weapons spread around the world ? or here in pdf form https://archive.org/stream/GeorgeRaceyJordanFromMajorJordansDiaries/George%20Racey%20Jordan%20-%20From%20Major%20Jordans%20Diaries_djvu.txt this spread of weapons produced the Mutuall assured destruction doctrine (or MAD) https://en.wikipedia.org/wiki/Mutual_assured_destruction and a new war like the cold war producing mass surveillance & ‘silent weapons for silent wars’ https://www.amazon.com/TOP-SECRET-Weapons-Introductory-Programing-ebook/dp/B00O561XG0

Uranium given to Russia and then the cold war followed ? https://www.wired.com/2011/10/red-spy-steals-a-bomb-secrets/

Many speculate as to the height the Hiroshima & Nagasaki bomb was dropped as it exploded in the air …what triggered it ? was it the Sun ? etc. The meltdown in Chernobyl https://www.express.co.uk/news/world/1144581/chernobyl-radiation-map-how-far-radiation-travel-did-Chernobyl-affect-Britain

Pearl Harbour was bombed in the USA. WW2 American losses in World War I, with 116,516 deaths and approximately 320,000 sick and wounded of the 4.7 million men who served. https://encyclopedia.1914-1918-online.net/article/war_losses_usa and in World War 2 total deaths were over 1 million and all wars the totals are staggering https://en.wikipedia.org/wiki/United_States_military_casualties_of_war