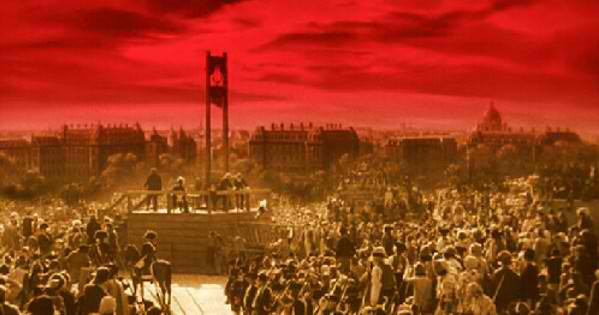 You could call it a SPELL, or WITCHCRAFT or whatever you want, but the bottom line is the American people are going insane. They have been in utter denial for a long time as warning after warning was given to them – such as my documentary “IRON MOUNTAIN, BLUEPRINT FOR TYRANNY” issued back in the 90’s that presented full documentation of how the rich men of the Earth were going to bring America and the world down and under their satanically controlled New World Order. All I ever got was flak, and a lot of it. Oh well, you can still view that on Angel Fall 923 for FREE, as everyone wants everything handed to them for free on a silver platter as well. [Ed.: Embedded Below]

All I ever heard was “It can’t happen here; it will never happen here…” on an on it went. Well, all you skeptics, what now? Bible prophecy never lies, and now most Americans are on their hands and knees groveling before Satan’s controllers and licking their black boots. Have you ever noticed the sick satanic smiles of Bill Gates, Fauci and Birx AS THEY DESTROY AMERICA? They smile as they rip from you EVERYTHING you ever had, you have lost your freedoms, most of have lost jobs, businesses, and next their homes and children, and you still lay prostrate before your communist governors, mayors and local county despots. No one even elected them to power!! They just rose up an took it!!  Lots of luck with that now!!

The 2nd Amendment says that the right to bear arms was for the purpose of securing a FREE STATE. Are you insane Americans FREE? Way too late now. Do you even know the meaning of the word FREE? No, you are frozen with fear and panic. When the nukes start to fall, when the enemies of America cross our borders, you will remain frozen, unable to act, unable to think, and will be killed and left for the vultures to devour. Another prophecy against America the apostates have no clue about.

As to Antifa, BLM and the other communist fronts, they too are INSANE for the INSANE global deep state will use them, then turn and utterly destroy them as well as they always have. Then God will turn upon the Global Deep State and DESTROY THEM AS WELL. Stupid is as stupid does. Isaiah 24 tells us the end result. A literal polar shift, with winds in excess if 1200 MPH clearing the surfaces of the nations, with the SEAS rising up to wash everything clear, just as in the DAYS OF NOAH. Only a few survive.

Well now, Global Deep State, the kings and rulers of Psalm two have alternative plans. They will go underground. Stupid move. They will be crushed to death having dug their own eternal graves with their underground tunnels and cities. Then to the moon to escape. Not wise, they will be destroyed there as well for the DESTROYER knows where they are.  How about Mars – not a good choice for no matter where they build their nests in the stars, God says I will find you, I will kill you all. How about under the sea, or in the clefts of the rocks? Whoops, gonna get you. These INSANE RULERS are attempting to play a deadly game of hide and seek. They will lose.

Well now, let’s build some weapons that will destroy Christ when He comes to claim possession of Earth. We’ll kill Him with our new advanced weapons, microwaves and all sorts of exotic weapons! Wow! What brilliance of mind, what courage to take on your creator, who allows your heart to beat, your lungs to work.  The One who sustains and upholds everything by his Divine Love. What utter brilliance of mind to challenge the One who can vaporize and destroy any weapon built by man and the fallen ones in a micro-second. UTTER INSANITY. Indeed, INSANITY NOW RULES. Beware!!

The only salvation for America and anyone on this God forsaken rock we call Earth is GODLY SORROW THAT LEADS TO A REPENTANCE NOT TO BE REPENTED OF. Whoops, I forgot, repentance is a WORK, some form of LEGALISM, something that is an anathema to the Church today. No, you all have chosen DEATH and RUIN, and America DESTROYED. You chose it, now live with it. The only repentance now, the only CHANCE for salvation is individual, not national. Enter in, for the time is now so very short, and then it’s OFF WITH YOUR HEAD if you want to see heaven.

Even those insane people who are involved in this do not realize their choice will lead them to eternal ruin, and they are under a delusion of all delusions. So it goes, as America is flushed down the toilet as the people wave and dance and smile as they vanish down the hole and evidently love to have it so.

I WILL PICK THEIR DELUSIONS, SAITH THE LORD OF HOSTS!

The Lord says He will not shed one tear over the billions of people lost, and Jesus said He does not pray for the world, but only for those whom the Father has given to Him. Do you understand what that means as we head into the final phases of the Mason’s ORDO AB CHAO and total destabilization?

You will NOT enter in at the STRAIT GATE, you WILL NOT walk the NARROW WAY, you will NOT accept what the Bible teaches you. When Jesus says PICK UP YOUR PERSONAL CROSS AND FOLLOW ME, you said, I WILL NOT. Therefore, YOU WILL NOT SURVIVE, but the Lord will DESTROY YOU ALL with a vengeance so horrific you cannot even begin to comprehend it. The Nation that forgets God will be turned into HELL.

But let’s say America somehow survives this matrix mayhem for a few more years yet and seems to come back to her formal glory as some are claiming WILL HAPPEN. Do they not realize that this GLORY will be a DECEPTION OF ANTICHRIST, who will be KING OF BABYLON AMERICA? Of course not, as the totally apostate Dominionist Christians, whom are Earth Dwellers, will be leading the charge!!  Excuse me, I SUDDENLY FEEL SICK…

I have seen the Glory of the Lord and His Terrible SWIFT SWORD. IT IS COMING. BEWARE…

Stewart Best has been teaching the true gospel of Jesus Christ for over 30 years. His classic video, “Iron Mountain—Blueprint for Tyranny,” drew national attention (including the Wall Street Journal) and deep state scrutiny. The “hate-mongering“ SPLC deemed him a “domestic terrorist,” a black helicopter dropped water balloons as a warning, and men with long guns showed up at his property, but the Lord delivered him from it all.

In addition to hosting his own radio shows, Stewart has appeared as a guest on the Art Bell Show and on Steve Quayle’s former radio show.

At fourscore years of age his force does not seem to have abated one bit, still producing prolifically with his team at the LightGate ministry in Wisconsin. He was a professional aviator for many years, flying the latest corporate jets, and he also served in the military.

Iron Mountain and many other videos are available at his YouTube channel “angelfall923“…but watch while you can! YouTube is de-channeling more and more truth-tellers every day. He that hath ears to hear, let him hear. (Matt 11:15)