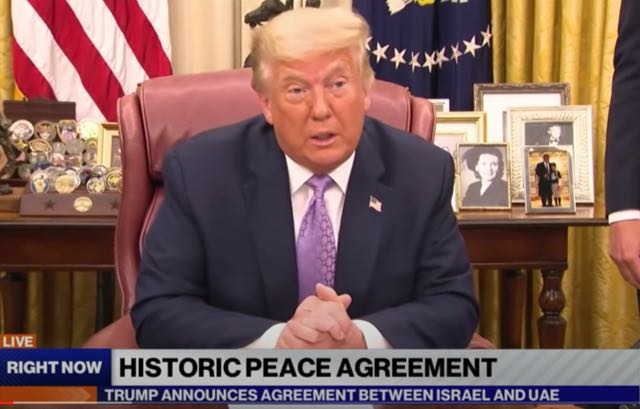 The president said the agreement titled the Abraham Accord will normalize the diplomatic relationship between the two countries and allow more access to religious sites in Israel.

The Abraham Accord between Israel and UAE initially looks like it was drafted to encourage the Saudis to follow suit.  However the Bible seems to indicate when they say peace and safety, then sudden destruction will follow.

For when they shall say, Peace and safety; then sudden destruction cometh upon them, as travail upon a woman with child; and they shall not escape.  (1Thess. 5:3)

Trump is pushing the interfaith dialogue with the Abraham Accord which will culminate in the One World Religion led by Dope Francis, the False Prophet of Revelation.

Christian is diametrically opposed to Judaism and every other religion on the face of the earth.  Christians are the only ones that can have a personal relations with their creator God of Abraham Isaac and Jacob and are saved by grace rather than works.  Christians are saved by believing that Jesus, Our Messiah, died for the sins of mankind and was raised after thee days and will come back to judge and rule the world.

I expect Psalm 83 war will commence soon.  See link to my article.

The Prophecy of the Psalm 83 War, The Prophecy Against Edom In The Book Of Obadiah, And The Prophecy For America (Manasseh) And The British Commonwealth (Ephraim) 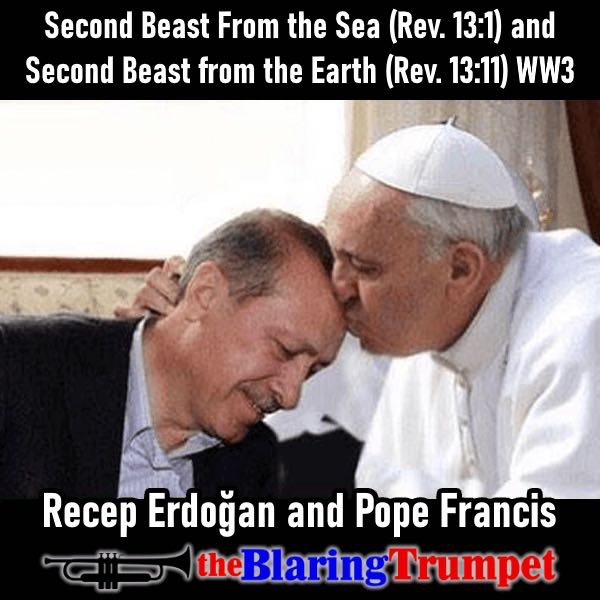 False Prophet Francis is referred to as the Beast of the Earth.  Dope Francis is an Argentinian Jew, A Fallen Watcher, and has called on the extermination of the white race.  Dope Francis worships Lucifer and plans to lead as many souls to Hell before Jesus Our Messiah returns  to earth to exterminate all evil on the earth.

Please see my previous articles on Dope Francis and Recep Erdogan (the Beast of the Sea).  Erdogan is the “Assyrian” and the transmigrated Ninurta.  Erdogan is also the rider on the pale green horse and all the four horsemen have started to ride.  The Holy Spirit is holding them back until the Harpazo.

The Four Horsemen of the Apocalypse have begun Their Gallop Towards War! 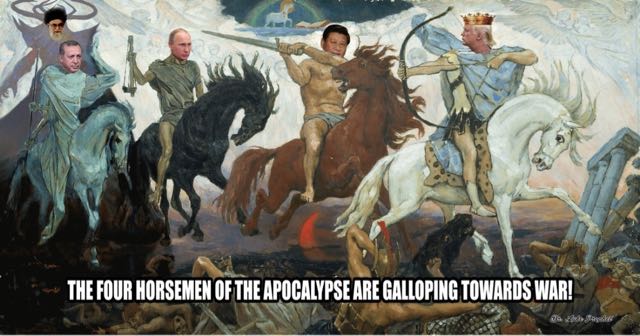 Donald Trump:  The False antiChrist And A Warmup To the Main Attraction

Donald John Trump, the President of America, riding on the white horse in Revelation 6:2 is the false antiChrist and is actually the bene ha’elohim Marduk. Notice in Revelation 6:2 the rider on the white horse is described as having a bow, but not a quiver containing arrows. In other words, Trump is nothing but a windbag who will only try to negotiate himself out of a uncomfortable situation. The white horse symbolizes salvation. Notice Jesus on His return rides a white horse (Revelation 19:11). Trump is not our Savior and certainly is not offering salvation in any shape or form. Many Americans voted for Trump as they saw him as the Savior of America, and others voted for Trump as the lessor of two evils, the other being evil Hillary. In either case, the dice were loaded against you as the Illuminati in America select your Presidential candidates, dictate who wins the elections, and believe they have control of all events here on earth. Trump stated: “I am the chosen one”, words that were used by Trump to describe himself. Trump is an actor and has been given a role to play in this production we are all witnesses to in order to bring this age, or the age of Pisces, to a close.

There is only one Savior of us all and that is Jesus Our Messiah and not Trump (Marduk) or anyone else. God of Abraham Isaac and Jacob is both producer and director of this play we are all in the middle of and God of Abraham Isaac and Jacob warned us of all of these events unfolding before our eyes through His prophets. Trump is a false antiChrist and false prophet and a poor warm up act for the arrival of the true antiChrist, the leader of the one world government and one world monetary systems. The antiChrist is a type and there are many antiChrists here on earth today! (1 John 2:18). This is the last hour and Jesus is at the door! Jeremiah 50:2 confirms that Bel and Marduk will be shattered in Babylon (America). Trump is Marduk and Bel is Vice President Pence.

Babylon has been captured

America has been captured

The Four Horsemen of the Apocalypse Leading the Tribes of Israel (Christian Nations) on a Parade to Armageddon – Now Unveiled! Are the Anunnaki Back on Earth Today? Are Stalin and Hitler Back? Who Are the Christian Enemies Today? Who Will Be Destroying America, Britain and the British Commonwealth During the Great Tribulation Starting Soon?

For the complete rubber’s neck guide to Armageddon.