Some important new discoveries have prompted the Catholic Church to promote “omnis omnium amorum” or “everybody loves everybody” as the new official church doctrine.

As an expression of this, the Vatican is officially coming out of the closet and publicly embracing homosexuality, bestiality, bisexuality, monosexuality, pederasty, and trisexuality**, says Ail Fakenithin, a Vatican spokes-entity.

The change in policy was the result of many recent startling discoveries in Vatican archives.  For example, the erroneous doctrine saying priests must be “celibate” was due to a middle ages mis-transcription of the word “celebrate.”

The other was a discovery by the Vatican chronovisor of the very first “sugar daddy,” as shown in the photograph below. 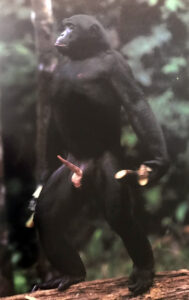 This remote human ancestor was spotted carrying a piece of sugar cane, which he was about to trade for sexual favors.  “This means connecting sugar and sex, or in modern times, money and sex, is the will of the creator,” the entity says.

“These discoveries show that all the Vatican sex scandals of recent years were due to the fact they were hidden,” says Cardinal Sin who has now been appointed chief church sexologist.  “From now on, we will end all hypocrisy by being honest and open about what we are doing,” Sin says.

This means, for example, the church will be open about its use of catamites as incentives to join the priesthood.  Nuns will also now be able to work as temple virgins by offering their bodies to Jesus and to church donors.

The children resulting from these “holy unions” will either be set to work as Catamites or temple virgins, Sin explains.

The less comely ones will be put to work manufacturing the life-enhancing substance adrenochrome and then at puberty “they will dedicate themselves to Molech,” the spokes-entity adds.

Also, in a nod to a change of management at “the very top,” of the church hierarchy, another mis-transcription is going to be corrected.  From now on the celebratory word “Hallelujah,” will be spelled “Hellelujah,” the officials say.