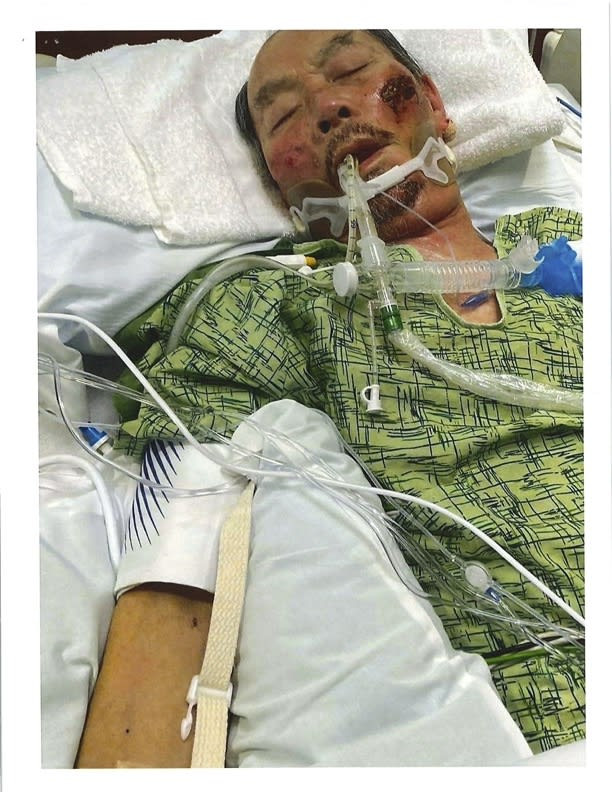 A Judge Stands up to a Hospital: “Step Aside” and Give a Dying Man Ivermectin

A Chicago-area judge saved a grandfather’s life with the single question that exposes hospitals blocking doctors from using a safe, FDA-approved drug: Why?

Sun Ng, a retired contractor from Hong Kong, traveled to Illinois to celebrate his only granddaughter’s first birthday. He got covid and was near death in a Chicago-area hospital. All other options were exhausted, but the hospital refused to give Mr. Ng a generic, FDA-approved drug with an extraordinary safety record that a doctor believed could safe his life.

Finally, a judge asked the right question about ivermectin.

Put another way: If a man is dying of covid in an ICU and all else has been tried, why not order a hospital to give a safe, last-ditch drug?

Edward Hospital, located near Chicago, offered three arguments as to why Sun Ng, seventy-one, should not be given ivermectin:

“I can’t think of a more extraordinary situation than when we are talking about a man’s life,” he said in a November 5 decision that is a model of rational decision-making in an irrational era.

“I am not forcing this hospital to do anything other than to step aside,” he continued in a Zoom hearing. “I am just asking—or not asking—I am ordering through the Court’s power to allow Dr. Bain to have the emergency privileges and administer this medicine.”

The hospital ultimately stepped aside. Dr. Alan Bain, an internist, administered a five-day course of 24 milligrams of ivermectin [it was crushed and put into the feeding tube], from November 8 through November 12.

Sun Ng, 63, traveled from Hong Kong for his granddaughter Kaylie’s first birthday celebration on September 17. (Photo by daughter Man Kwan Ng as submitted to the court.)

Ng, who with his wife, Ying, had come from Hong Kong to celebrate their granddaughter’s birthday, was able to breathe without a ventilator within five days—he, in fact, removed the endotracheal himself. He left the ICU Tuesday, November 16, and, although confused and weak, was breathing Sunday without supplemental oxygen on a regular hospital floor.

“Every day after ivermectin, there was accelerated and stable improvement,” said Dr. Bain, who administered the drug in two previous court cases after hospitals refused. “Three times we’ve shown something,” he told me. “There’s a signal of benefit for ventilator patients.”

Ng’s remarkable progress stands in sharp relief to the repeated attempts by Edward-Elmhurst Health, the hospital’s managing system, to thwart the use of ivermectin. It succeeded in having the court’s initial November 1 order dismissed by claiming Ng was in better health than his lawsuit contended (he wasn’t). It then defied the November 5 order, saying Dr. Bain was not vaccinated (a negative test resolved the issue).

Moreover, after Ng’s treatment was complete, the hospital system filed notice that it would appeal the order that had already been carried out. It did this even though Sun Ng seemed to have benefited greatly.

The patient’s improvement, or condition generally, did not seem to matter.

At the outset, the hospital argued against court intervention, saying, “Mr. Ng is not terminal at this point.” But it was forced to admit that he had for days teetered on the brink of death after Ng’s daughter and only child, Man Kwan Ng, spoke to a hospital doctor November 3—and took copious notes that were submitted to the court.

“I am not forcing this hospital to do anything other than to step aside.”

The doctor told Dr. Ng, who holds a PhD in mechanical engineering, “He has been in the same state for many, many days…critically ill,” according to a court affidavit. A nurse, meantime, suggested that Dr. Ng “stop all this aggressive care and let [her father] die naturally.”

The hospital doctor estimated that “someone in his condition being on a ventilator like that has a 10 or 15 percent chance of survival,” the judge recounted in his decision.

That bleak prediction wasn’t an option for Ng’s wife of forty years or the daughter fighting on his behalf. “We love him dearly,” Dr. Ng said in court papers. “He is our world…I cannot give up on him, even if the Defendants have.”

The judge’s finest moment may have been when he dashed the most glaring myth about ivermectin—that it is not safe, despite decades of use that shows otherwise. Noting that all drugs have side effects, Judge Fullerton listed ivermectin’s effects from a government website.

“(N)umber one, generally well tolerated; number two, dizziness; number three, pruritus; number four, nausea/diarrhea. These are the side effects for the dosage that’s being asked to be administered,” he said.

“The risks of these side effects are so minimal that Mr. Ng’s current situation outweighs that risk by one-hundredfold.”

Dr. Alan Bain, having been first duly sworn, deposes and says as follows:

Dr. Alan Bain gave a supplemental affidavit testifying to his successful use of ivermectin to treat covid-19 in gravely ill patients. Judge Fullerton ordered the hospital to “step aside” and allow him to give the drug that saved Mr. Ng’s life.

If he hadn’t yet made his position clear, the judge then addressed the statement by a hospital doctor who, the judge said, “testified that the risk is that there is no benefit.”

On the contrary, the judge said, “The possible benefit this Court sees is helping save Mr. Ng’s life with this drug.”

Ralph Lorigo is a Buffalo, New York, attorney who represented Ng and has received inquiries on behalf of fifty more patients since September. He said the Ng case was by far the costliest so far with three decisions, four court appearances, and now an appeal that is certainly moot.

“That’s a terrible set of circumstances that people have to hire a lawyer to save a loved one’s life,” Lorigo told me. “That is a crime.”

Lorigo battled another hospital in the Edward-Elmhurst Health system last spring in a similarly drawn-out case to get ivermectin for Nurije Fype, sixty-eight. Her case inspired Dr. Ng to file suit—for good reason.

Desareda Fype, who was a fierce advocate on her mother’s behalf, texted me last week: “Mom is doing sooo good, thank God! It’s been 4.5 months. Mom is home from the hospital and getting stronger each day!”

In an interview Sunday, Dr. Ng said her father is not out of the woods yet. But ivermectin made a clear difference, she said. Before given the medication, every attempt to wean her father even briefly from the respirator failed. Within eight hours on the medication, he was able to undergo a one-hour breathing trial. “I am positive,” she told me when I asked if she credits ivermectin.

While Dr. Bain was well aware of ivemectin’s ability to fight the covid virus in early infection, even he was surprised to discover its late-stage effectiveness. “It quells the fire of the inflammatory storm and also helps to lower the progression of stiffened lungs—aka pulmonary fibrosis,” he said. “That’s the beauty of this drug. I’m not saying it’s a cure. It’s just amazing.”

They have been provided with a perverse incentive to escort patients to deaths door- https://aapsonline.org/bidens-bounty-on-your-life-hospitals-incentive-payments-for-covid-19/

And, families of the deceased have been bribed to keep their mouths shut- https://www.fema.gov/disaster/coronavirus/economic/funeral-assistance

Only One Way Out. Broad Way “Sinner’s Prayers” Do Not Save. Download a Most-Helpful Guide to the Narrow Way, Written by a Man Who Walked it to the END (Just as Jesus Commanded All of Us): CLICK HERE

→  Time is running out for humanity – even for the vast majority of Christians who think they are going to Heaven but are not – just as Jesus said. A DELUSION OF A SALVATION THAT DOES NOT EXIST.

→  For more information, FREELY-download and study out while you can Stewart Best’s: