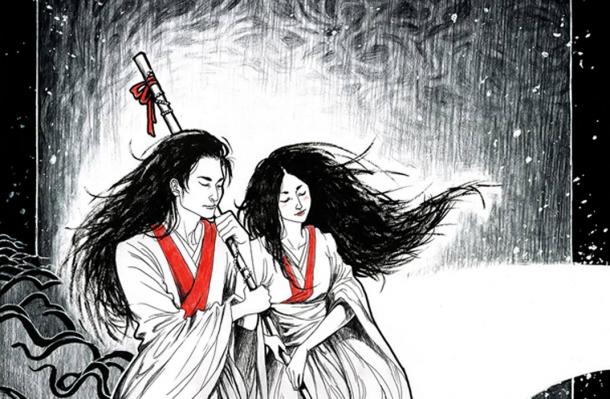 Japanese mythology is collectively chronicled in the Kojiki, the oldest historical record written in Japan in 712 AD, and in the Nihon Shoki written in 720. As was common practice before the age of script, these tales were passed on through oral traditions—the Teiki and Kuji, among others—for generations before they were ever recorded. The Kojiki and Nihon Shoki comprise the creation mythology of the Japanese and the Shinto religion, describing the formation of the heavens and the earth, the islands of Japan, the gods, and the creation of mankind.

It Begins in a Lifeless, Silent Universe…

The Kojiki commences with the Kamiyo, or Age of the Gods, an age which begins with a lifeless, silent universe. Sounds began to indicate the movement of particles throughout the vast, formless space. This movement resulted in light, which remained at the top of the universe.

A cloud of particles beneath then formed Heaven, and the particles that could not rise created the Earth. Three Deities then began the process of creation. Two “essences” also formed, Passive and Active, and became the ancestors of everything.

Source: https://www.ancient-origins.net/myths-legends-asia/age-gods-legendary-history-japan-002819
Before It’s News® is a community of individuals who report on what’s going on around them, from all around the world.