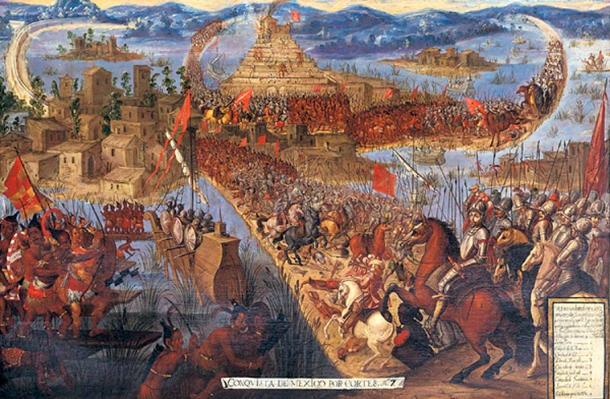 The fall of Tenochtitlan is an important event in the history of the Americas as it marks the end of the Aztec Empire. This event took place on August 13, 1521 and was the result of a three-month long siege. However, it may be argued that the Spanish were not really the masters of Mexico upon completing this task, and they would only achieve this status some decades later.

Despite the Aztec Empire coming to an end, local resistance continued outside Tenochtitlan, which would take the Spanish about 60 grueling years to completely suppress. Hence, the fall of Tenochtitlan is often regarded as the end of the first phase of the Spanish conquest of Mexico. 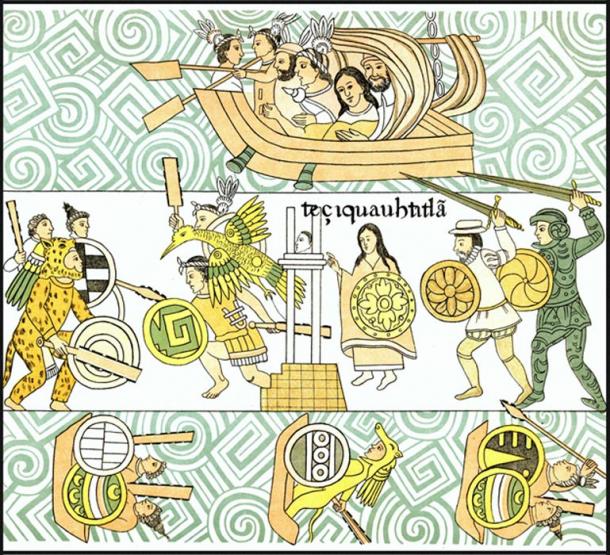 Attack of the Spanish-Tlaxcallan forces with Malinche and Cortés. Depicted by the Spaniards’ Tlaxcallan native allies. 1773 Reproduction from 1584 original version of the Lienzo de Tlaxcala. (Public Domain)

Loading...
"Not by might, nor by power, but by my spirit, saith the Lord of hosts." Zechariah 4:6
BEFORE IT'S NEWS ON TELEGRAM
GET THE TELEGRAM APP - https://telegram.org/ JOIN OUR CHANNEL - https://t.me/BeforeitsNews
Read it..
BEFORE IT'S NEWS
SIGN UP FOR OUR NEWSLETTER
Today's Top Stories
Taking out the Trash: Dr. Steve Pieczenik on Coming Events 2020-01-13
Monkey Werx: Trump on the Run! Night Moves with Black hats - Overwatch SITREP v2 Update
Situation Update, Jan 14th, 2021 - The FEMA, Military Coup to Save America, Not Destroy It - Mike Adams Must Video
X22Report: The Kraken Is About to Be Released, Down She Goes, Game Over! - Bitcoin Ben - Must Video
Breaking: Gen. Michael Flynn Addresses The Nation: 'Do Not Give Up! 4 More Years!'! - Must Video
X22Report: Checkmate, [Zero Day] Approaches, Sometimes a Good Movie Can Reveal a Lot of Truth! - Must Video
"I've Seen the Laptop, it Was a Direct Attack on Our Election"! - Lt Gen Thomas Mclnerney Need to Watch Full Video
Navy Seal Michael Jaco Talks to Juan O Savin! What! Biden Will Be Sworn in at Supreme Court! But Wait, the Ending Is a Real Blast - Must Video
FBI Puts Nation on High Alert! Targets a “Q” Wired... but What Happens Next, No One Saw Coming!
Scott McKay Jan 2021 News Update
Loading...
Featured
The Left’s Conditioning of Americans Is Complete
No One Is Listening: A Country Divided Against Itself
To My Brothers and Sisters In The Military
THE MOUNT1 BEFOREITSNEWS REPORT - The Truth Is Hard To Come By
President Trump to Take Massive Action; Pardons, Declassifying and Special Counsels Allegedly Incoming
ZetaTalk Newsletter as of January 24, 2021
Current US Congress Warrants Total Dissolution for Provoking Civil War
Domestic Terrorists: We Are Being Divided By Design, And Easily Manipulated
Grab your gun right now.
Scott McKay Jan 2021 News Update
Loading...
Top Global
Strange Events in D.C. Many Searching for Truth! Pray!
Does the Measles Virus Exist? This Will Make Your Hair Curl
Greece’s Renewed Relations With Russia Will Be Tested by Biden
The Destructive Hypocrisy of the Political Left Is What Caused the Capitol Protest
US Israeli Strike on Iran in Syria via Israeli Live News
Top 7 Reasons Why People Are Testing Positive for Covid-19 After Vaccinations
A Concise View Of The Coming Dystopian World Order
Q Psyop Exposed & Those Who Push the Narrative (Cutting Edge with John Hall & Dan Bidondi
Saudi-Led Embargoes Against Qatar Failed
China and EU Sign Agreement That Further Isolates US
Loading...
Top Alternative
Politics Won't Fix the American Decline
The Attack on the Capitol Was Coordinated & Planned By Traitors 1/4/2021 6:41 AM PDT - Must Video
Trumpet News - Breaking News INTEL Updates for 01-13-21
The Mobbing of a Portland Bookstore Reminds Us Why Fahrenheit 451 Was Written
Did Nostradamus Predict Everything Currently Happening In 2021?? - Dollar_Vigilante
OVERKILL! 2nd Trump late stage impeachment reveals dems skewed priorities
Trump Prevented From Joining Parler, Gab by Jared Kushner
Surreal 'Dome Fountain' of Lava Bubbles up in Hawaii Volcano - Unusual, Stunning - There Is No Denying the Veracity and Warnings
Book of Enoch: Judgment of the Sinners and the New Heaven - New Earth
6 signs that your gut health is in jeopardy, especially in kids