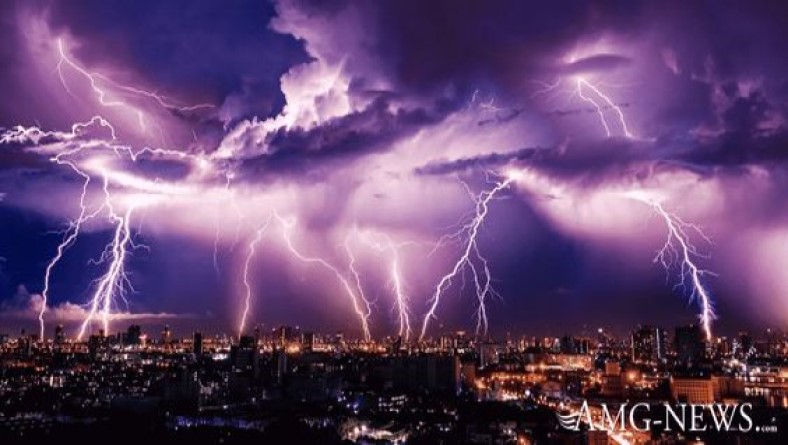 HAARP, Chemtrails, atmospheric warming. Weapons used to produce earthquakes, tsunami, volcano eruption, global warming, lightening, cyclones, tornado, floods, drought, mega storms... etc, etc…
Dr. Michio Kaku admitted that ,HAARP electromagnetic waves can be used to stimulate geophysical events such as can modify the weather, earthquakes, climate change, volcanic eruptions, hurricanes and the like.
Dr. Kaku admitted that ‘made-made hurricanes’ have been the result of a government weather modification program in which the skies were sprayed with nano particles and storms then “activated” through the use of “lasers”.

The idea behind Weather Control is simple, when you think about it simply. When you see and experience a strong thunderstorm, with a lot of lightening and thunder, what fact about this storm strikes you the most?
Are you not impressed by the powerful display of energy that you witness? Energy is the primary ingredient behind nature’s storms. Therefore, you must believe that, just perhaps, if energy is the most dominant outward factor in all kinds of storms, then energy might be the key factor in creating such storms in the first place.
So, you ask, how much energy is required to create, and then direct, storms? The answer to that question depends upon many factors, but let us tell you how much capability has been built into the newly created power transmission station in remote Alaska.
Also: Chemtrails: Aerosol and Electromagnetic Weapons In The Age of Nuclear War
These power transmission towers are not your typical towers, as they are designed to generate power in such a way that it is beamed up into the ionosphere in tremendous quantities.
“The $30 million Pentagon project, euphemistically named HAARP (High Frequency Active Auroral Research Program), is made to beam more than 1.7 gigawatts (billion watts) of radiated power into the ionosphere — the electrically charged layer above Earth’s atmosphere.
Put simply, the apparatus is a reversal of a radio telescope — just transmitting instead of receiving. It will ‘boil the upper atmosphere’. After heating and disturbing the ionosphere, the radiations will bounce back onto the earth in for form of long waves which penetrate our bodies, the ground and the oceans.”
Let us allow Dr. Begich explain this concept.
“… this invention provides the ability to put unprecedented amounts of power in the Earth’s atmosphere at strategic locations and to maintain the power injection level, particularly if random pulsing is employed, in a manner far more precise and better controlled than heretofore accomplished by the prior art ….”
“… the goal is to learn how to manipulate the ionosphere on a more grand scale than the the Soviet Union could do with its similar facilities. HAARP would be the largest ionospheric heater in the world, located in a latitude most conducive to putting Eastlund’s invention into practice.” 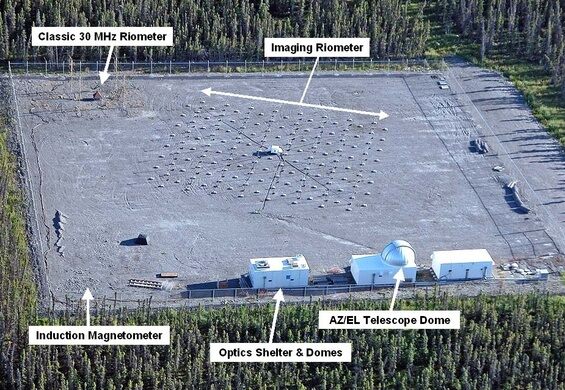 Furthermore, from this northern latitude, the energy could be aimed into the ionosphere so that it would bounce back down to the earth so it would come down wherever the scientists wanted it to come down. The secret was to learn how and where to aim it to hit the earth where they wanted it to hit, creating the type of disaster or weather they desired.
In a nutshell, this is the nucleus of the expertise just recently acquired to control the weather.
By pouring measured energy that has been focussed into certain parts of the ionosphere, scientists can create all kinds of storms like hurricanes, thunderstorms, floods, tornadoes, and drought.
REAL reasons why 90% of the population wouldnt survive 6 months without power. If a solar event like that of 1859 happened today …
In NEWS1198, “U.N. Treaty Proves Weather Control Is Real”, we report news articles that Malaysia actually contracted with a Russian Weather Modification company to create a hurricane that would be directed close enough to clear the smoke and smog from Malaysia’s cities without actually coming on to land to create devastation. This Russian company delivered, and Malaysia had clear skies.
Our information also tells us that, not only can hurricanes be created, they can be dismantled should scientists so desire. And, they certainly can be driven on the ocean much like we drive our cars on roadways. Therefore, one has to ask why American scientists have allowed unprecedented hurricanes, like Andrew, Irma, Harvey, Katrina, to ever come on shore?
Why are American scientists allowing extensive damage and lives lost to recent unprecedented storms, since they have the capability to keep these storms away from us?
Doesn’t our own American Government have our best interests at heart?
Keep that thought in mind as we examine still more aspects of this HAARP technology that is pouring such enormous quantities of energy into our upper atmosphere. Researches quickly found that this technology could be used in ways other than just to control the weather. 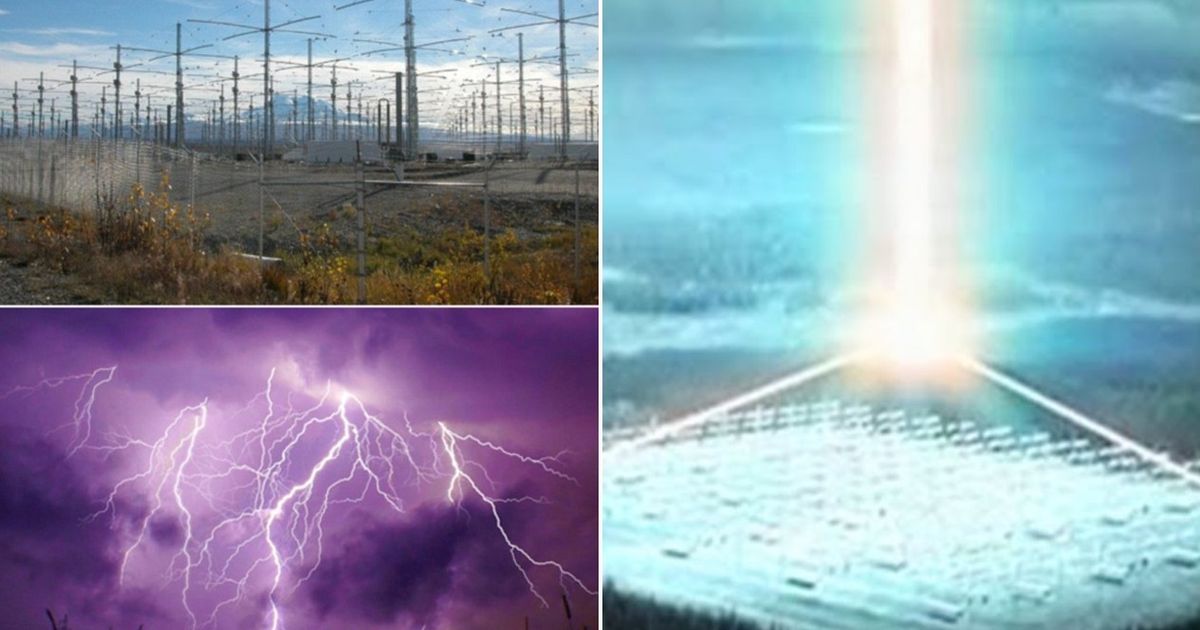 They discovered they had stumbled upon a weapon which could be used most effectively, to destroy, destroy, and destroy some more, with the vast majority of the peoples of the world completely unaware of what was happening to them. After all, most people today still believe that the control of the basic weather of this planet is out of the control of mankind.
Also: 5G is a Military Weapon – Even SWAT Teams are Helpless Against This
Now, let us examine some of the concerns of these New Age scientists of the damage HAARP can inflict upon the earth. HAARP can:
–Create Earthquakes on demand wherever and whenever you wish on the earth.
“The planetary-scale engineers tried to replace a ten by forty kilometer section of the ionosphere with a ‘telecommunications shield’ of 350,000 copper needles tossed into orbit … when the military sent up a band of tiny copper wires into the ionosphere to orbit the planet so as to ‘reflect radio waves and make reception clearer’, we had the 8.5 Alaska earthquake and Chile lost a good deal of its coast. That band of copper wires interfered with the planetary magnetic field.”
–Manipulate Global Weather Systems, changing weather patterns, rainfall, drought
–Earth going wild in its rotation, possibly spinning out of control
–Magnifying and Focussing sunlight, called ‘Skybusting’.This process could burn holes in the protective ozone layers, thus allowing intense sunlight to pour through, burning mankind severely .
–Mind Control . Using extremely low frequency bombardment at just the same frequency as the human brain operates, you can change a person’s thoughts or emotions.
God help us all when and if wicked men achieves finesse with this weapon! 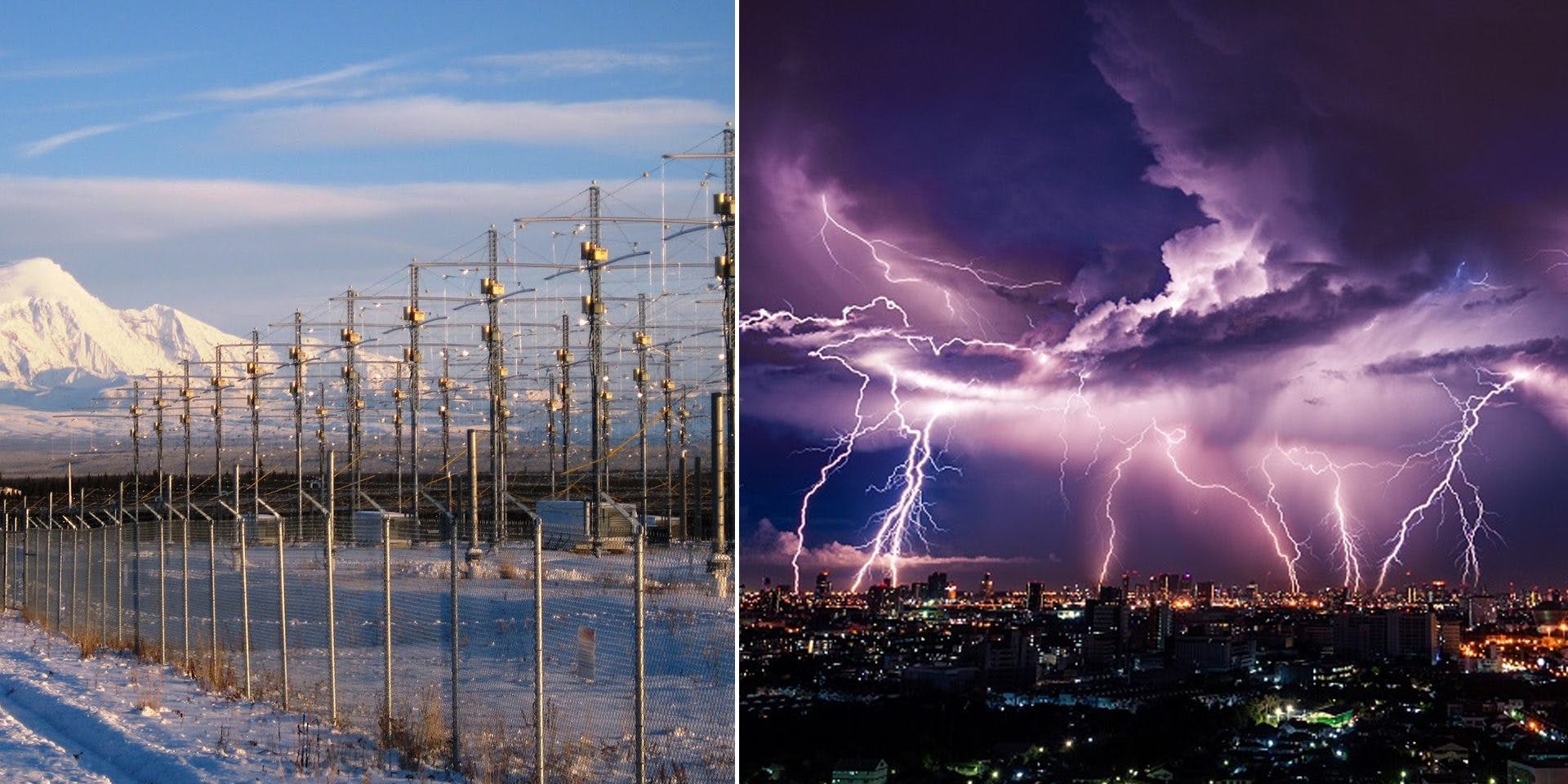 –HAARP can create nuclear-sized explosions without radiation! This process is protected by patent 4,873,928. This might be the “great” sword being wielded by the forces of Antichrist in Revelation 6:4. With this weapon, you could attack targets with nuclear-sized explosions without having to deliver nuclear warheads on missiles, or on aircraft, or any carrier!! This development could render all military calculations about how to defend against an enemy’s attack completely useless.
Suddenly, my mind lights up like a light bulb! Suddenly, I understand why the Russian and American negotiators were suddenly able to reach agreement on the destruction of so many warheads and missiles. Each side even allowed inspection teams to oversee the destruction of actual warheads and missiles. The world felt very much safer.
However, warheads carried on missiles are obsolete!! If both sides can create nuclear-sized explosions without radiation by HARRP-type radio transmitting towers, you would not need missiles to carry warheads. How can you defend against a nuclear-sized attack that is being initiated by silent, invisible ELF radio waves?
How do you defend against a nuclear-sized attack when it is being initiated by ELF radio waves that are being generated on enemy territory, fly up to the ionosphere above his territory, and then bounce back down to your territory to create the explosion?
Clearly, the world has entered an entirely new world of warfare that no one has even conceived let alone thought through very well.
Furthermore, this subject brings us to the next capability of HAARP and like radio wave technology. These ELF radio transmitters can throw up an impenetrable shield against incoming missiles, aircraft, or anything trying to get through our airspace!
Then, why are we attempting to perfect an anti-missile missile that can actually hit another missile in flight? Why is the American military moving rapidly in conjunction with the Israeli military to bring this more effective anti-missile missile to Israel so as to better protect against Syrian and Egyptian missiles?
Also: Electromagnetic Pulse Threats to America’s Electric Grid … 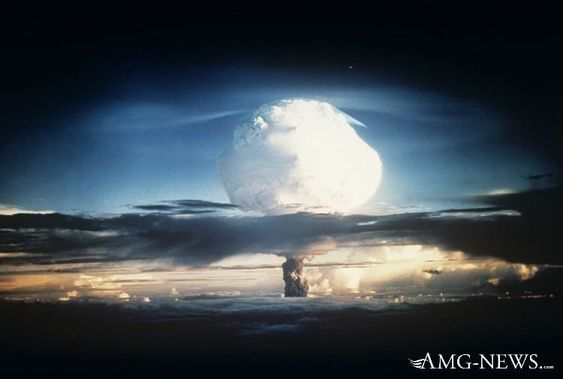 They probably don’t want very many people knowing that we possess this type of effective missile shield over any battlefield, either strategic or tactical. When the Arabs engage the Israelis in this next war, they just might be shocked at the type of weapons that are annihilating them!
The existence of this type of military capability is also the reason we are allowing the Arab governments to buy American weaponry to fight Israel in this next war. The Arabs don’t understand that the Israeli military and we have taken a quantum leap forward in destructive, killing, and annihilating capability!
In fact, has the infantryman finally been made obsolete in warfare?
The greatest concern of New Age scientist Nick Begich, in his book, “Angels Don’t Play This HAARP“, is that scientists and the military are so very arrogant in their ignorant, reckless use of focussed energy into the ionosphere.
Military scientists talk about “kicking this thing in high gear to see what would happen”! This attitude is complete arrogance. What if they set off an unintended reaction in the atmosphere that cannot be controlled or stopped?
Indeed, I think some of the judgments foretold in the Book of Revelation might come from this type of major miscalculation by scientists.
ALL  AMG-NEWS