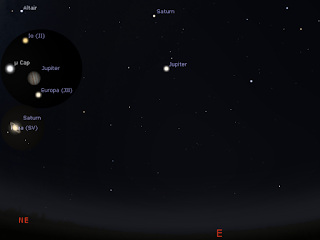 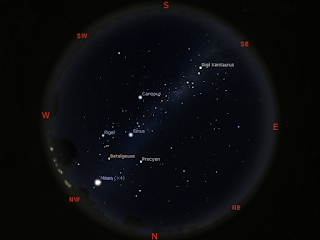 sunset), on Saturday, April 17 as seen from
Adelaide. 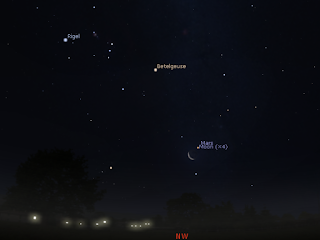 Evening sky at 19:14 ACST  (90 minutes after sunset), on Tuesday, April 13  facing north-west as seen from Adelaide. Mars is within binocular and wide field eyepiece distance of the crescent Moon. . 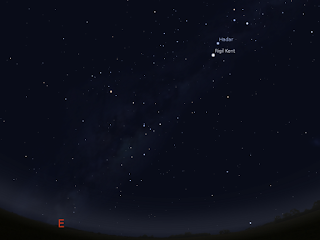 The south-eastern horizon, around 11:00 pm local time in Australia. Can you see the Emu? Click to embiggen.

If you are out camping this school holidays, now that the Moon is just waxing and the evening sky is dark it is a great time to find the constellation of the Emu. Now you are saying: ‘Emu – but there is no Emu!’ However, the Emu is one of the indigenous Australian constellations. And interestingly, it is a “dark” constellation, one that is made up entirely of dark dust lanes!

The Emu consists of the Coal Sack, the dark dust cloud that nestles in the crook of the Southern Cross (the head of the Emu), and a dark dust lane that stars near the Pointers (alpha and beta Centauri) and runs down to the curl of stars that forms the body of Scorpio. This is the neck and wings of the Emu. A second dark dust lane forms the lower body and legs.

Being made of dark dust lanes, it is almost impossible to see in any city. However, here in the suburbs, if I let my eyes adapt for several minutes I can make it out. And of course in the country it is almost immediately obvious. Once you spot it, you will wonder why you never saw the Emu before. The best time too look currently is about 11 pm when the Emu is nearly vertical and easier to recognise. You can look earlier from 9-10 pm, but the legs are cut off and it might be harder to recognise.

*There is more than one Emu, another Indigenous group identifies Orion as an Emu.

Mercury is  lost in the twilight.

Venus is lost in the twilight.

Mars is readily visible in the evening sky above the north-western horizon in the early evening. Mars is just beyond the stars that form the tips of the horns of Taurus the Bull. On the 17th Mars is just two finger-widths (about 2 degrees) from the crescent Moon. This means Mars is within binocular and wide field eyepiece distance of the crescent Moon.