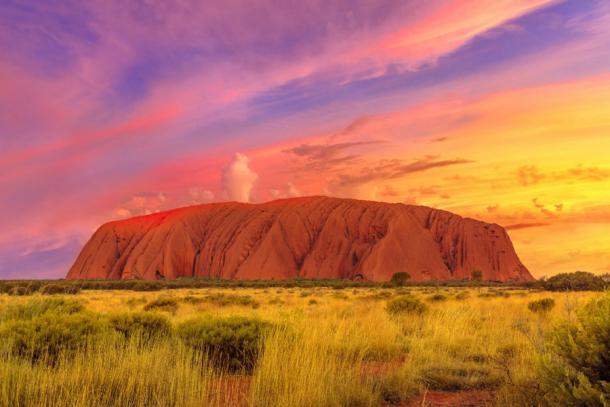 Uluru, once known as Ayers Rock, is one of Australia’s most iconic landmarks. Located in the Northern Territory of Australia, it is the single largest monolith rock in the world. At a staggering height of 346 meters (1135 feet) and running about 3.2 kilometers (2 miles) in length and width, this sandstone rock formation towers over an otherwise completely flat terrain. Uluru, which means ‘great pebble’, carries great spiritual and cultural significance for the Aboriginal tribes of this region.

Looking at the vast desert plain around Uluru, it is hard to believe it was once underwater. The monolith was formed around 500 million years ago when the earth’s plates were shifting and due to a burst in pressure, the giant rock formation was formed. The rock is homogeneous, and as a result there is no soil on it. Its creation, material, and size make it one of the most significant sites for geologists

One of its most notable features is the spectacular way in which it changes color as the sun reflects off the minerals within the rock. Full of caves, canyons, cracks, water holes and other natural formations, as well as ancient rock paintings and carvings, Uluru, and the surrounding national park, was added to the UNESCO World Heritage List in 1987 for its important natural values. In 1994, it was also added to the list for its extraordinary value as a living cultural landscape.