We live in a very musical house. 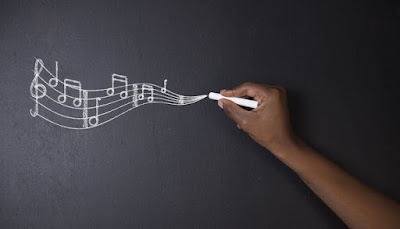 Seriously, this is the first time we’ve lived in a place with modern appliances, and I tell ya, I can’t wait to replace (nearly) all of them.

The washing machine works great … until it doesn’t. Loads of laundry can take up to two hours (!!) to wash. And I’ve never seen a washer that gives so many error messages. Whenever there’s an error, it holds the laundry hostage (because the door locks), which then requires a frantic scrambling through the user’s manual (which usually reveals nothing), then a massive pushing and shoving to get the washer far enough away from the wall to unplug it (to reset it), and then we have to jiggle the controls again until the wash deigns to unlock itself (usually by running it on spin cycle or something). I did a load of whites last week that, I kid you not, took a total of about twelve hours to get finished. 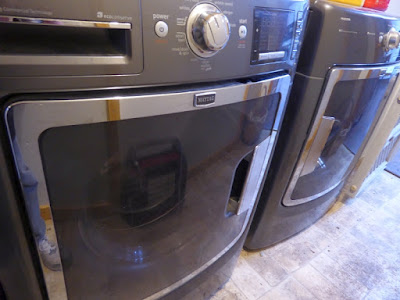 Give me an old-fashioned washing machine where you lift the lid, add the clothes and detergent, and push the button. No singing, no error messages, just clean clothes.

As for the dryer, I’ve literally never used it. After the first few wrestling matches with the washing machine when we first moved in, Don looked wearily at the dryer and said, “Go with the technology you know.” So I did. 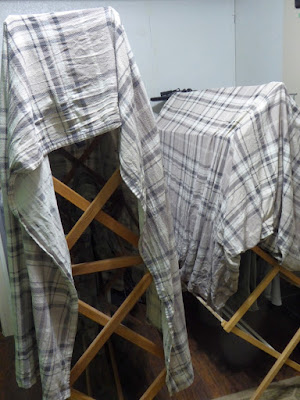 This is the dishwasher. It, too, sings. I’ve opened the door once or twice to peer inside, but I’ve never used it. I’ve managed to get through the last 40 years without a dishwasher and don’t see a need to start now. 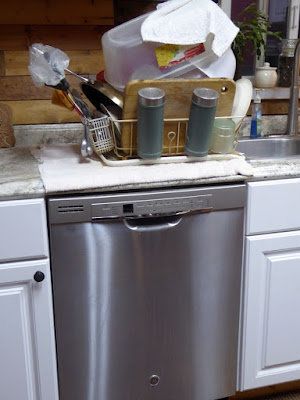 This is our refrigerator. It’s a fancy dancy model with a pull-out freezer on the bottom, and a cold water and ice dispenser in the door. The interior actually has less room than our old el-cheapo model in our last house, and it sings to us if we don’t properly close the door or commit some other misdemeanor. 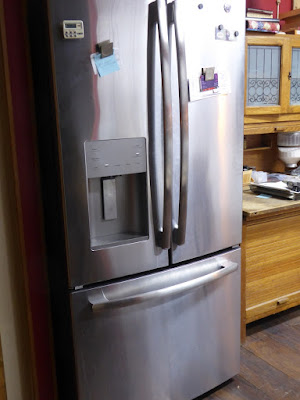 You can probably guess where this is going. We woke up this morning and saw this: 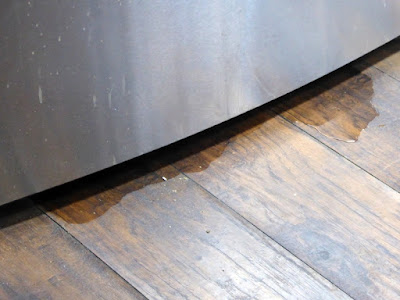 We pulled the fridge out and saw, no surprise, the water line was leaking. I tell ya, refrigerators shouldn’t have water lines into them. End of sentence.

Until he has a chance to remove a side panel and crawl under the house to disconnect the water line, Don tapped into his Inner MacGyver and crimped the water line with wire. 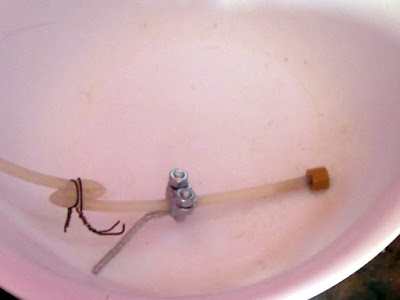 He then found the “off” switch to the ice maker, and shut it off.

I took the opportunity to clean the floor… 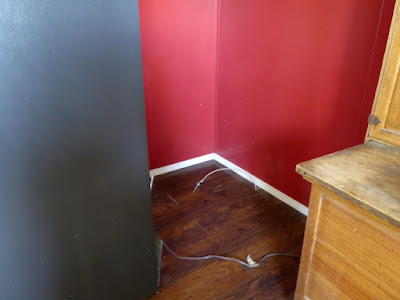 …and then we shoved the fridge back against the wall. Problem solved.

As Don put it, the ice maker was fun. It was a novelty. But the old ways (ice cube trays) work just fine, and we get nice cold water from the sink tap.

In every other respect this house is wonderful, but I could boot the appliances out the door tomorrow and be happy as a clam.