Mysterious Visitor from Another Star Can't Be Captured

When astronomers see something in the universe that at first glance seems like one-of-a-kind, it’s bound to stir up a lot of excitement and attention. Enter comet 2I/Borisov. This mysterious visitor from the depths of space is the first identified comet to arrive here from another star. We don’t know from where or when the comet started heading toward our Sun, but it won’t hang around for long. The Sun’s gravity is slightly deflecting its trajectory, but can’t capture it because of the shape of its orbit and high velocity of about 100,000 miles per hour.

Telescopes around the world have been watching the fleeting visitor. NASA’s Hubble Space Telescope has provided the sharpest views as the comet skirts by our Sun. Since October the space telescope has been following the comet like a sports photographer following horses speeding around a racetrack. Hubble revealed that the heart of the comet, a loose agglomeration of ices and dust particles, is likely no more than about 3,200 feet across, about the length of nine football fields. Though comet Borisov is the first of its kind, no doubt there are many other comet vagabonds out there, plying the space between stars. Astronomers will eagerly be on the lookout for the next mysterious visitor from far beyond.

The comet appears in front of a distant background spiral galaxy (2MASX J10500165-0152029). The galaxy’s bright central core is smeared in the image because Hubble was tracking the comet. Comet Borisov was approximately 203 million miles from Earth in this exposure. Its tail of ejected dust streaks off to the upper right. The comet has been artificially colored blue to discriminate fine detail in the halo of dust, or coma, surrounding the central nucleus. It also helps to visually separate the comet from the background galaxy.
View Nov. 16 image (unannotated) Dec. 9, 2019, photo (right) 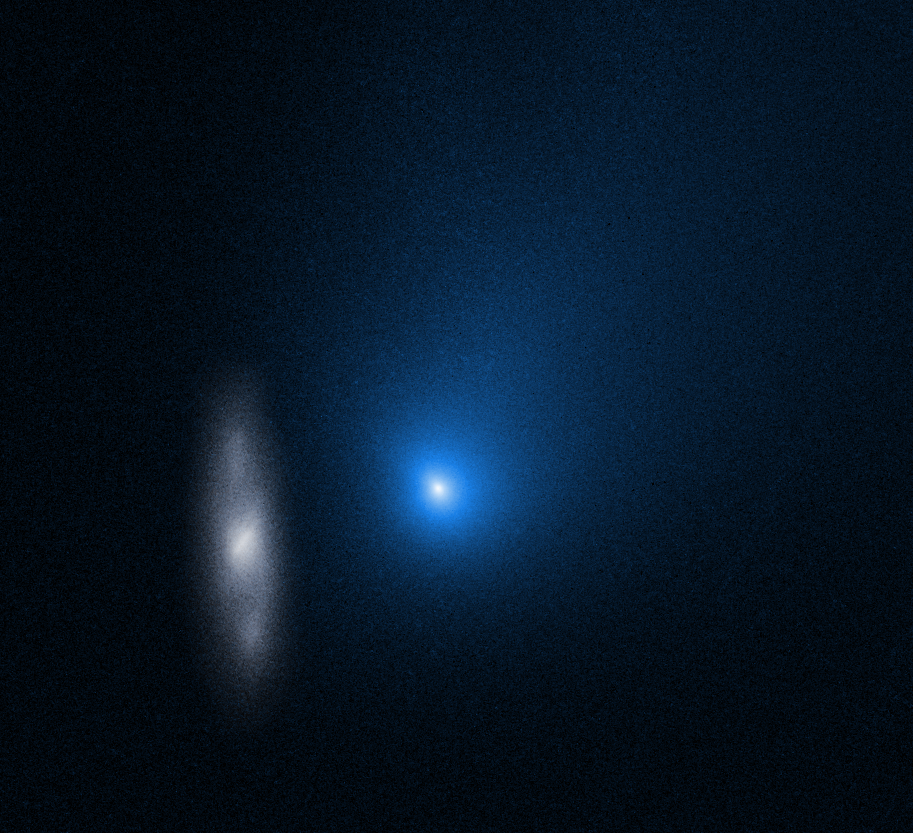 Hubble revisited the comet shortly after its closest approach to the Sun where it received maximum heating after spending most of its life in frigid interstellar space. The comet also reached a breathtaking maximum speed of about 100,000 miles per hour. Comet Borisov is 185 million miles from Earth in this photo, near the inner edge of the asteroid belt but below it. The nucleus, an agglomeration of ices and dust, is still too small to be resolved. The bright central portion is a coma made up of dust leaving the surface. The comet will make its closest approach to Earth in late
December at a distance of 180 million miles. View Dec. 9 image (unannotated) 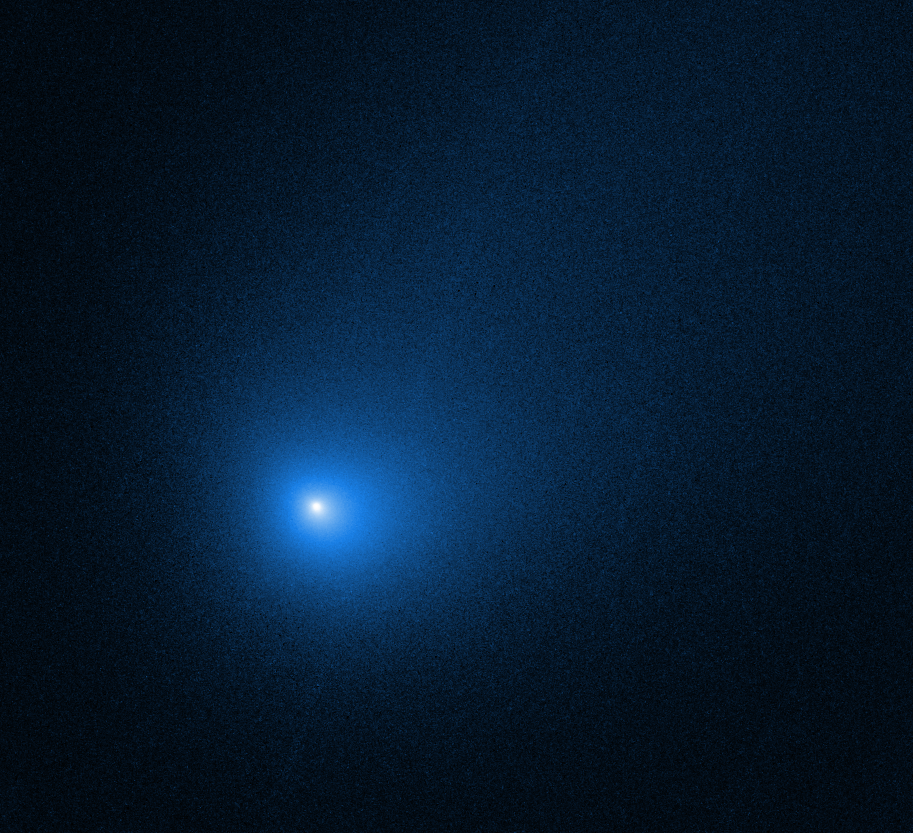 “Hubble gives us the best upper limit of the size of comet Borisov’s nucleus, which is the really important part of the comet,” said David Jewitt, a UCLA professor of planetary science and astronomy, whose team has captured the best and sharpest look at this first confirmed interstellar comet. “Surprisingly, our Hubble images show that its nucleus is more than 15 times smaller than earlier investigations suggested it might be. Our Hubble images show that the radius is smaller than half a kilometer. Knowing the size is potentially useful for beginning to estimate how common such objects may be in the solar system and our galaxy. Borisov is the first known interstellar comet, and we would like to learn how many others there are.”

Crimean amateur astronomer Gennady Borisov discovered the comet on Aug. 30, 2019, and reported the position measurements to the International Astronomical Union’s Minor Planet Center in Cambridge, Massachusetts. The Center for Near-Earth Object Studies at NASA’s Jet Propulsion Laboratory in Pasadena, California, working with the Minor Planet Center, computed an orbit for the comet, which shows that it came from elsewhere in our Milky Way galaxy, point of origin unknown.

Nevertheless, observations by numerous telescopes show that the comet’s chemical composition is similar to the comets found inside our solar system, providing evidence that comets also form around other stars. By the middle of 2020 the comet will have already zoomed past Jupiter’s distance of 500 million miles on its way back into the frozen abyss of interstellar space.

The Hubble Space Telescope is a project of international cooperation between ESA (the European Space Agency) and NASA. NASA’s Goddard Space Flight Center in Greenbelt, Maryland, manages the telescope. The Space Telescope Science Institute (STScI) in Baltimore conducts Hubble science operations. STScI is operated for NASA by the Association of Universities for Research in Astronomy in Washington, D.C. The Minor Planet Center and the Center for Near-Earth Orbit Studies are projects of NASA’s Near-Earth Object Observations Program of the Planetary Defense Coordination Office at NASA Headquarters.

Loading...
"Not by might, nor by power, but by my spirit, saith the Lord of hosts." Zechariah 4:6
Read it..
BEFORE IT'S NEWS
SIGN UP FOR OUR NEWSLETTER
Today's Top Stories
If Tom Horn Is Correct on This Trump Wormwood Connection, the Ramifications Could Not Be Higher - Update
X22Report: Trump Ready to Reveal Hidden Secrets, Deep State Walked Right into it, There Is No Step 5! - Great Video
U.S. Forces Thwart Russian Attack on Anunnaki
Mark Levin Delivers His Opening Statement on Impeachment to Senate! - Great Levin TV Video
Planet X Huge News! Navy Warning, UFO's & Time Traveling Aliens & World Without End via Jacob Israel
Weaponized Coronavirus Invades the USA As World Panics Over Possible Pandemic! +Video
Impeachment Collapses! He Can’t Stop Lying! Hoax Proves Intent To Destroy Constitution! Highlights!
Q: MoarQPosts! Moar Eisenhower! Shot Heard Around the World! Delta! - Great Video
Report: “Hoarding Response Teams” Being Activated in Canada to Locate and Eliminate “Hoarding” of Supplies
The Intellectual Dark Web: A Glitch in the Matrix (Videos)
Loading...
Featured
The Corporate Debt Bubble Is a Train Wreck in Slow Motion
Q: Wednesday Headlines! Schiff on Crack! Cry'in Chuck! The Rage of the Nad! Fu Un! - Great Video
Mark Taylor Latest—Big Huge Boomshell Gonna Take Place Soon! - Great Video
Q News - Sold Out to Ukraine! Were We Sold Out to Foreign Powers? - Great Video
Q Anon: Qastle Clean - Leverage - In Pursuit of Truth Presents - 1.23.20
Not Ready for Economic Collapse: Only 41 Percent of Americans Have $1000 to Cover an Emergency
Weaponized Coronavirus Invades the USA As World Panics Over Possible Pandemic! +Video
Trump Update 1/21/2020... "This Is Going to Be Like Killing a Fly With a Sledgehammer" (Videos)
America is 'Going to Pot'
Oh My! Sen. Graham Goes Off on Democrats & Media Over Impeachment Trial! - Great Video