The molecular gas in galaxies is organised into a hierarchy of structures. The molecular material in giant molecular gas clouds travels along intricate networks of filamentary gas lanes towards the congested centres of gas and dust where it is compressed into stars and planets, much like the millions of people commuting to cities for work around the world.

To better understand this process, a team of astronomers led by Jonathan Henshaw at Max Planck Institute for Astronomy (MPIA) have measured the motion of gas flowing from galaxy scales down to the scales of the gas clumps within which individual stars form. Their results show that the gas flowing through each scale is dynamically interconnected: while star and planet formation occurs on the smallest scales, this process is controlled by a cascade of matter flows that begin on galactic scales. These results are published today in the scientific journal Nature Astronomy.

Visualisation of the observed velocity flows in the spiral galaxy NGC 4321, measured using the radio emission of the molecular gas (carbon monoxide): along the vertical axis, this image shows the velocities of the gas, while the horizontal axis represents the spatial extent of the galaxy. The wave-like oscillations in gas velocity are visible throughout the galaxy. 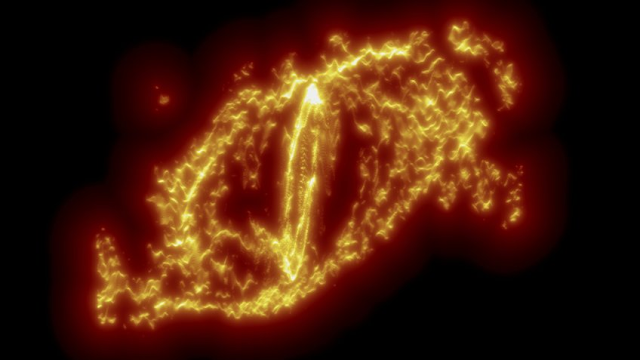 The molecular gas in galaxies is set into motion by physical mechanisms such as galactic rotation, supernova explosions, magnetic fields, turbulence, and gravity, shaping the structure of the gas. Understanding how these motions directly impact star and planet formation is difficult, because it requires quantifying gas motion over a huge range in spatial scale, and then linking this motion to the physical structures we observe. Modern astrophysical facilities now routinely map huge areas of the sky, with some maps containing millions of pixels, each with hundreds to thousands of independent velocity measurements. As a result, measuring these motions is both scientifically and technologically challenging.

In order to address these challenges, an international team of researchers led by Jonathan Henshaw at the MPIA in Heidelberg set out to measure gas motions throughout a variety of different environments using observations of the gas in the Milky Way and a nearby galaxy. They detect these motions by measuring the apparent change in the frequency of light emitted by molecules caused by the relative motion between the source of the light and the observer; a phenomenon known as the Doppler effect. By applying novel software designed by Henshaw and Ph.D. student Manuel Riener (a co-author on the paper; also at MPIA), the team were able to analyse millions of measurements. “This method allowed us to visualize the interstellar medium in a new way,” says Henshaw.Animation of the full dataset of NGC 4321. It visualises the two image dimensions with the gas velocities for each position added as the third dimension. The video begins with the distribution of the gas along the plane of the sky and then rotates to reveal how the gas velocity changes over the extent of the galaxy.

Credit: Jonathan Henshaw
The researchers found that cold molecular gas motions appear to fluctuate in velocity, reminiscent in appearance of waves on the surface of the ocean. These fluctuations represent gas motion. “The fluctuations themselves weren’t particularly surprising, we know that the gas is moving,” says Henshaw. Steve Longmore, co-author of the paper, based at Liverpool John Moores University, adds, “What surprised us was how similar the velocity structure of these different regions appeared. It didn’t matter if we were looking at an entire galaxy or an individual cloud within our own galaxy, the structure is more or less the same.”

Image of the molecular gas (carbon monoxide) distribution in the southern spiral arm of the galaxy NGC 4321 spanning roughly 15,000 light years across. The bright spots indicate giant molecular clouds that are semi-regularly spaced inside the ridge of more dilute gas inside the spiral arm. The cyan circles depict the locations of star forming complexes. 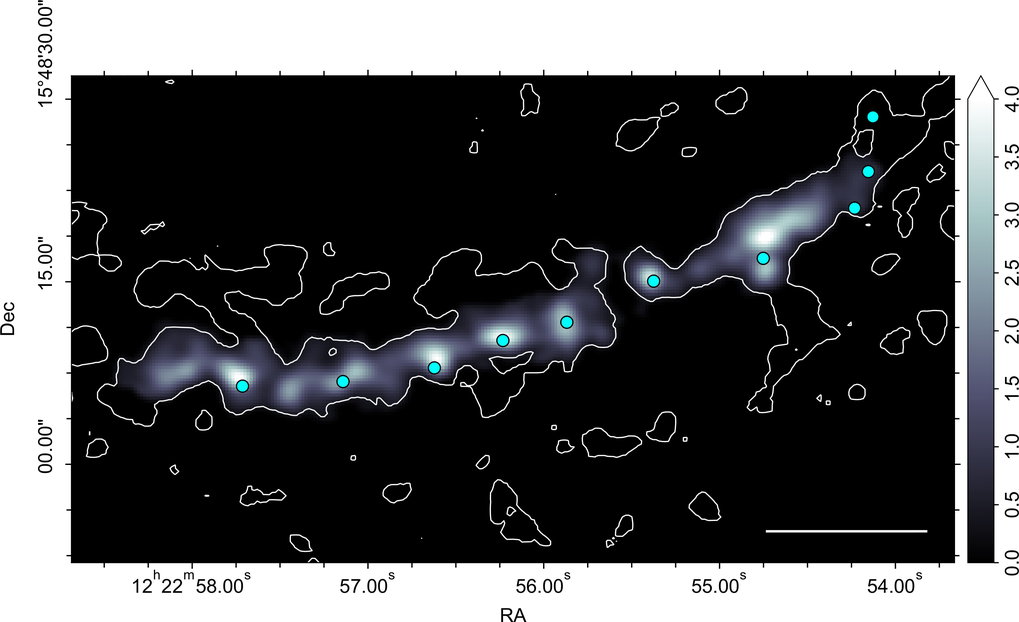 To better understand the nature of the gas flows, the team selected several regions for close examination, using advanced statistical techniques to look for differences between the fluctuations. By combining a variety of different measurements, the researchers were able to determine how the velocity fluctuations depend on the spatial scale.

“A neat feature of our analysis techniques is that they are sensitive to periodicity,” explains Henshaw. “If there are repeating patterns in your data, such as equally spaced giant molecular clouds along a spiral arm, we can directly identify the scale on which the pattern repeats.” The team identified three filamentary gas lanes, which, despite tracing vastly different scales, all seemed to show structure that was roughly equidistantly spaced along their crests, like beads on a string, whether it was giant molecular clouds along a spiral arm or tiny “cores” forming stars along a filament.

The team discovered that the velocity fluctuations associated with equidistantly spaced structure all showed a distinctive pattern. “The fluctuations look like waves oscillating along the crests of the filaments, they have a well-defined amplitude and wavelength,” says Henshaw adding, “The periodic spacing of the giant molecular clouds on large-scales or individual star-forming cores on small-scales is probably the result of their parent filaments becoming gravitationally unstable. We believe that these oscillatory flows are the signature of gas streaming along spiral arms or converging towards the density peaks, supplying new fuel for star formation.”

In contrast, the team found that the velocity fluctuations measured throughout giant molecular clouds, on scales intermediate between entire clouds and the tiny cores within them, show no obvious characteristic scale. Diederik Kruijssen, co-author of the paper based at Heidelberg University explains: “The density and velocity structures that we see in giant molecular clouds are ‘scale-free’, because the turbulent gas flows generating these structures form a chaotic cascade, revealing ever smaller fluctuations as you zoom in – much like a Romanesco broccoli, or a snowflake. This scale-free behaviour takes place between two well-defined extremes: the large scale of the entire cloud, and the small scale of the cores forming individual stars. We now find that these extremes have well-defined characteristic sizes, but in between them chaos rules.”

“Picture the giant molecular clouds as equally-spaced mega-cities connected by highways,” says Henshaw. “From a birds eye view, the structure of these cities, and the cars and people moving through them, appears chaotic and disordered. However, when we zoom in on individual roads, we see people who have travelled from far and wide entering their individual office buildings in an orderly fashion. The office buildings represent the dense and cold gas cores from which stars and planets are born.”