cientists have calculated the mass range for Dark Matter – and it’s tighter than the science world thought.

Their findings – due to be published in Physical Letters B in March - radically narrow the range of potential masses for Dark Matter particles, and help to focus the search for future Dark Matter-hunters. The University of Sussex researchers used the established fact that gravity acts on Dark Matter just as it acts on the visible universe to work out the lower and upper limits of Dark Matter’s mass. 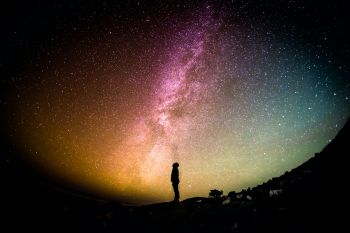 The results show that Dark Matter cannot be either ‘ultra-light’ or ‘super-heavy’, as some have theorised, unless an as-yet undiscovered force also acts upon it.

The team used the assumption that the only force acting on Dark Matter is gravity, and calculated that Dark Matter particles must have a mass between 10-3 eV and 107 eV. That’s a much tighter range than the 10-24 eV – 1019 GeV spectrum which is generally theorised.

What makes the discovery even more significant is that if it turns out that the mass of Dark Matter is outside of the range predicted by the Sussex team, then it will also prove that an additional force – as well as gravity – acts on Dark Matter.

Professor Xavier Calmet from the School of Mathematical and Physical Sciences at the University of Sussex, said: “This is the first time that anyone has thought to use what we know about quantum gravity as a way to calculate the mass range for Dark Matter. We were surprised when we realised no-one had done it before – as were the fellow scientists reviewing our paper.

“What we’ve done shows that Dark Matter cannot be either ‘ultra-light’ or ‘super-heavy’ as some theorise – unless there is an as-yet unknown additional force acting on it. This piece of research helps physicists in two ways: it focuses the search area for Dark Matter, and it will potentially also help reveal whether or not there is a mysterious unknown additional force in the universe.”

Folkert Kuipers, a PhD student working with Professor Calmet, at the University of Sussex, said:

“As a PhD student, it’s great to be able to work on research as exciting and impactful as this. Our findings are very good news for experimentalists as it will help them to get closer to discovering the true nature of Dark Matter.”

The visible universe – such as ourselves, the planets and stars – accounts for 25 per cent of all mass in the universe. The remaining 75 per cent is comprised of Dark Matter.

It is known that gravity acts on Dark Matter because that’s what accounts for the shape of galaxies.