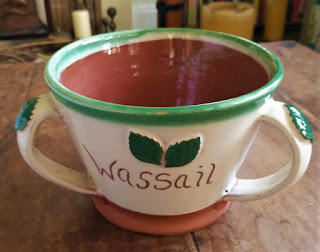 I’m now the proud owner of this wonderful wassail bowl, which I found in a charity shop for £4.50. Wassail comes from the Old English meaning “good health”. Melusine Draco, in Have a Cool Yule, writes:

I’ve blogged quite a bit about toasting the apple trees, so here I’m going to write more about seasonal hospitality. The exact date when friends, family and neighbours would share a wassail bowl varied from Christmas Eve through to Twelfth Night, or even a bit earlier or later. A traditional punch shared was mulled ale mixed with roasted apple pulp, called lambswool. Professor Ronald Hutton, in The Stations of the Sun, writes that wassail bowls didn’t necessarily only hold booze. They could contain milk or fruit. The custom was about charity as well as friendship, as it could be carried around by carol singers who would offer songs as well as a sip of ale to householders they visited, expecting coins or gifts in return.

Professor Ronald Hutton mentions that other customs developed around the ritual too. For example, in parts of Sussex those who drank had to first walk around the bowl sunwise and then stir it with a silver spoon. In other places the wassailers were accompanied by girls carrying a decorated doll in a covered box, which people would pay to look into. I’ll be blogging more about that custom later.

Wassailing is one Yuletide tradition that might date back to ancient times. Steve Roud, in The English Year, writes: “Of all the [Christmas] customs that are believed to be remnants of ancient luck-bringing rituals, wassailing is the only one with any reasonable claim to this description, as it is overtly concerned with wishing prosperity on those visited.” He also writes that there’s little historical evidence that wassailing customs go back earlier than the late Middle Ages.

However, Professor Ronald Hutton points out that the word “wassail” is mentioned in the 8th century tale of Beowulf, although the custom of wassailing at Christmas is recorded from the 14th century. He believes it’s possible that the custom of wassailing crops might be older than the Christmas custom and that in southern England was a purification or blessing ritual. He writes that in Hertfordshire orchard wassailing included lighting a big bonfire and 12 smaller ones, which might possibly have represented the sun and months of the year – although others say they are the apostles and some that they are witches. He also writes about smiliar Scottish customs before New Year of saining – or burning herbs such as juniper as a purification rite – that might possibly date back to pagan times.

Steve Roud emphasises that folklorists and historians should be wary of attributing too much ancient lore to seasonal customs: He writes: “Like the word Yule, Wassail has long been used anachronistically by writers as a shorthand way to conjure up a popular romantic view of England in the Dark Ages.”

I’m of the opinion that customs don’t have to be provably ancient to inspire us with a feeling of connection to our ancestors of blood, place, and tradition. It’s good to know about history, and what written records tell us, but sometimes we have to go with our intuition about what will work when it comes to magic and ritual. In current times it’s perhaps more important than ever to wish each other, and the land, good health – although this year maybe by pouring drinks into individual cups to raise a toast rather than all sipping from the same bowl!