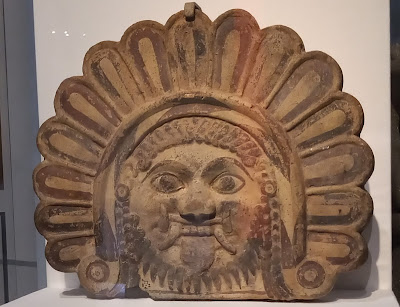 Organising Goddesses is probably more difficult than herding cats, but many have tried. And, of course, some goddesses take feline form, such as Sekhmet, whose statue is in the photo to the left. Back in August I ran a goddess workshop with artist and spiritual teacher Laura Daligan at the British Museum and talked about some ways people have tried to organise goddesses into themes. Here’s a little of what the two of us covered…

In the past, before the 1960s, scholars tended to be men, and tended to interpret Goddesses as being related to fertility, even if it was a stretch to do so. For example, Robert Graves, in his book The Greek Myths which was published in 1955, wrote:

“The moon’s three phases of new, full, and old recalled the matriarch’s three phases of maiden, nymph (nubile woman), and crone. Then, since the sun’s annual course similarly recalled the rise and decline of her physical powers – spring a maiden, summer a nymph, winter a crone – the Goddess became identified with seasonal changes in animal and plant life; and thus with Mother Earth who, at the beginning of the vegetative year, produces only leaves and buds, then flowers and fruits, and at last ceases to bear.”

While many women have found it empowering to think of Goddesses in terms of maidens, mothers and crones, it doesn’t work for all. Personally, as someone who went through life without becoming a mother and am now old enough to be a crone but don’t particularly like to be called one, I prefer to look for other ways of perceiving feminine power.

The British Museum’s Feminine Power exhibition organises powerful female figures into five themes: creation and nature; passion and desire; magic and malice; justice and defence; and compassion, wisdom and salvation. The author of the exhibition catalogue, museum curator Belinda Crerar, explains: “Together, they show how feminine influence has been conceived in a phenomenal range of human experience.” Here’s an example in each of those categories from the exhibition and its catalogue.

Creation and Nature: This includes deities who gave birth to the world or to countries as well as those who are strongly associated with the land, sea, and all things growing including harvests. In the oldest Hindu texts, the Vedas, there are hymns to Prithvi (prith-vee), Goddess of the earth, creator of the world, and source of nourishment. The Vedic Goddess Shri is the embodiment of prosperity, royal power and beauty. Shri is known as Lakshmi in modern Hinduism and is associated with wealth, success and good fortune. To the right you can see a photo I took of her statue in the exhibition

Passion and Desire: Aphrodite was the Ancient Greek Goddess of grace, beauty and fecundity. She’s often thought of as a love Goddess, but is more than that. Her Roman equivalent is Venus. Both were considered important for martial success as well as in romantic situations. You can read more on my earlier blog post about her.

Magic and Malice: Medusa of Greek and Roman mythology, although often depicted as a monster, has also been portrayed as a victim, a metaphor for unrest, and a figurehead for feminist rage. At the top you can see a photo I took of her statue in the exhibition. Hekate stood at the crossroads between life and death for the Ancient Greeks and Romans, but is also protective and associated with witchcraft and magic. You can read more on my earlier blog post about her.

Justice and Defence: The Greek Goddess Athena embodied military strength; civic governance through justice; economic growth through industry; and art, philosophy and science. To the right you can see a photo I took of her statue in the exhibition.

In Buddhism, Bodhisattva are enlightened beings who guide others on their spiritual journeys. In some forms of Buddhism the Bodhisattva of Compassion is variously known as Avalokiteshvara (ava-low-key-tesh-vara), Guanyin, and Kannon, meaning Perceiver of sounds. She hears the cries of those who are suffering. I blogged about Guanyin earlier this week.

There are many other ways of thinking about the themes goddesses represent in general terms and I’ll be writing more on the topic of organising goddesses in the future.  There’s also a few more days to go and see the Feminine Power exhibition before it closes on September 25th. I thoroughly recommend it if you are in London and haven’t seen it already.

I also in the past contributed to a book called Naming the Goddess, published by Moon Books (the picture to the left is a link). You can also find an extract from that here: http://www.badwitch.co.uk/2014/09/extract-naming-goddess-eris.html

Loading...
"Not by might, nor by power, but by my spirit, saith the Lord of hosts." Zechariah 4:6
BEFORE IT'S NEWS ON TELEGRAM
GET THE TELEGRAM APP - https://telegram.org/ JOIN OUR CHANNEL - https://t.me/BeforeitsNews
Read it..
BEFORE IT'S NEWS
SIGN UP FOR OUR NEWSLETTER
Today's Top Stories
New Judy Byington Report as of 9/21/22
What's Next is Bigger Than You Can Imagine! [Game Over] Thank Q For Playing! MUST WATCH!! (Video)
US Military Veteran's Facebook Account Deleted After 17 Years After He Gains 500K Followers In A Month And Going Viral For Military Optics Posts!! Here Is His Latest Intel!!
Red October! They Are All Panicking! - Must Video
September 24th Simpsons Electromagnetic Pulse/Red Dawn Invasion/Comet Triple Whammy "End Of Civilization" Prediction? Check The Evidence And You Decide, Remembering Entire World Is Under Whitehat Military Law!!
Deep State Is Losing Public Support Quickly! Time To Turn The Tables! Traitors Time Is Up! - On The Fringe
Situation Update, Sep 21, 2022 - Plum Island Tick-Based Bioweapons: USDA & DoD Secret Research Programs For Mass EXTERMINATION! - Mike Adams Must Video
X22 Report: The Public Is Vital! Release Of Info Is Vital! Outrage! Justice! It’s Happening! - Must Video
Man-Made Disaster! Lake Mead’s Darkest Secret Is Now Exposed: It’s Not What You’re Being Told!
Kim Clement Trump Return Great Prophecy 2022 Supreme Court Prediction etc
Loading...
Featured
New Monkey Werx SITREP 9.21.22 - Our Moral Compass is Shot
Major Events Are Coming in the Next Few Hours - Sept 2022
New ShariRaye: Until Now - King Charles III - Princess Diana Death - For the Sins of My Father - When Royalty Abduct Children
We Are Fast Approaching A Moment Of Truth! Checkmate? - Truth & Art TV
Best & Taylor (9/21/2022): NIGHT SHADOWS 09212022 -- Wake Me Up When September Ends. Putin, Ukraine, EU, NATO, WAR, Boosters
Situation Update: Putin Threatens West With Nuclear War Over Ukraine! Video Released Of Scud Missile Hitting Pentagon On 911! Border Nightmare! Trump Charged! Trump Comms! Runs On Banks! Structure In Front Of White House! - We The People News
New Judy Byington Report as of 9/21/22
24 September – Shemitah – Occurs every 7 years – Jewish Calendar
New Freedom Force Battalion: Red October Defcon - Scare Event Necessary - Amos 9 9-21-22
Putin Makes 2 Moves Toward War World III - Dave Hodges Must Video
Loading...
Top Global
New Monkey Werx SITREP 9.21.22 - Our Moral Compass is Shot
Russia Ready, O.G. Red Pills, Digital Dollars, and More Featuring G Edward Griffin (Video)
Major Events Are Coming in the Next Few Hours - Sept 2022
US Gov’t Backs Ukrainian Kill Lists Targeting Journalists, Kids (Video)
Deep State Science - They Are Hiding God!! (Video)
More and More People Are Exhibiting Strange Behaviors Then Dying in the Same Mysterious Way. Why? (VIdeo)
We Are Fast Approaching A Moment Of Truth! Checkmate? - Truth & Art TV
Juan O' Savin: Huge Intel Drop!!!!! (Video)
Scare Event Necessary - Red October - DEFCON 1 (Video)
New Freedom Force Battalion: Red October Defcon - Scare Event Necessary - Amos 9 9-21-22
Top Alternative
Update About Med Beds & Link to Medical Fleets Info (Video)
Another Hollywood Sodomite Bites the Dust. He Cried From Excitement From Getting His Jab (Video)
Movie shows September 23rd is America Doom 24 is UK
PUTIN: "WEST IS USING UKRAINE IN ATTEMPT TO DESTROY RUSSIA"
Body Language Expert and Translator: Putin Isn't Bluffing About Using Nukes
The New Communism
They Know That They Are Killing The Economy, But They Are Doing It Anyway…
The Very Cross To Embrace From Which Many Run (video)
UN Warns Of A “Winter of Discontent” As The “World Is In Peril”
Why 90% of the Population Would Die Without Electricity: Experts Predict That An EMP Strike That Wipes Out Electricity Across The Nation Would Ultimately Lead to The Demise Of Up to 90% Of The Population