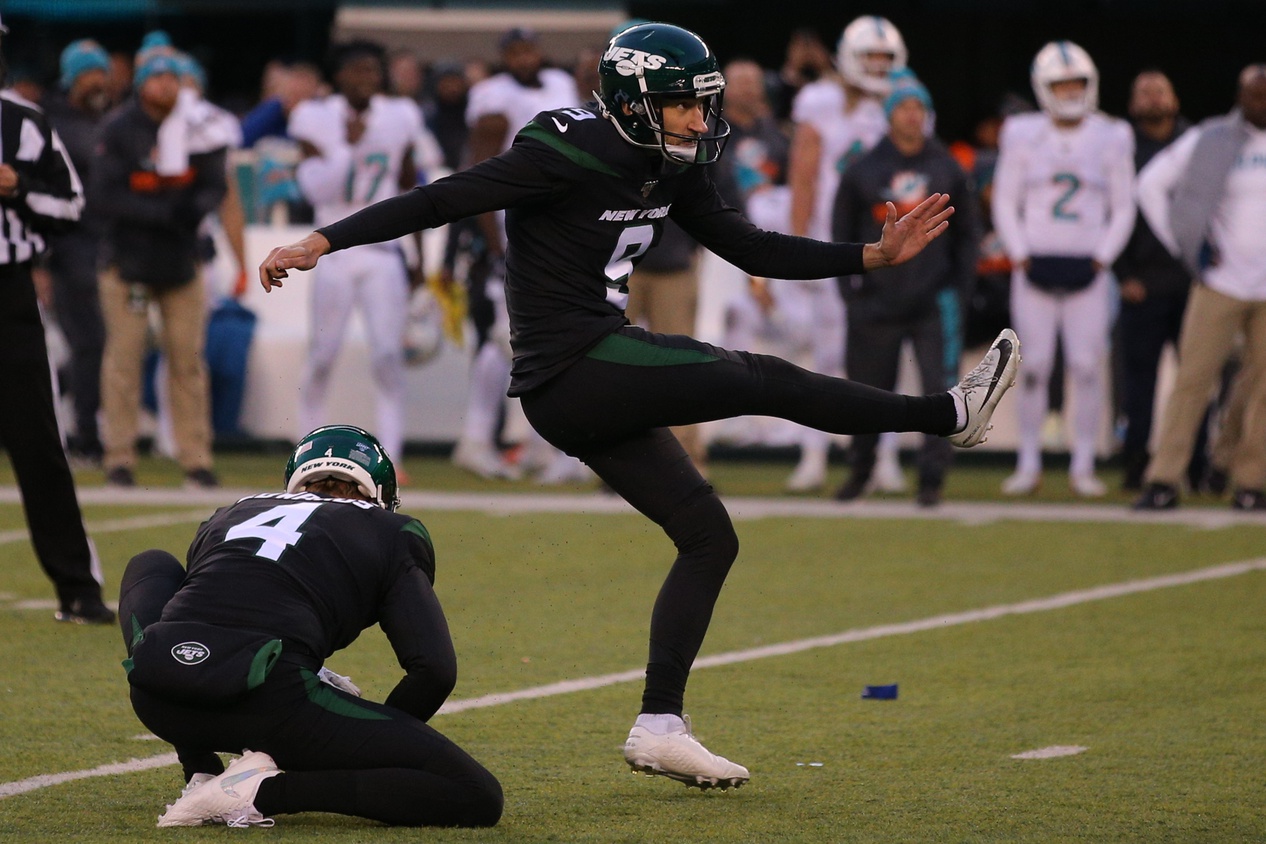 The Jets have signed nine players to reserve/future deals. The team announced these signings on Monday.

TE Connor Davis (6-8, 260)
Davis was signed to the practice squad in November. He’s had stints with the St. Louis BattleHawks of the XFL and the Birmingham Iron in the Alliance of American Football. A Stony Brook, N.Y., product, Davis was invited to Giants rookie minicamp in 2018 but was not offered a contract. He played in 41 games in college and totaled 6 catches for 41 yards. Davis took snaps at TE, OT and DE for the Seawolves.

LB Noah Dawkins (6-1, 235)
Dawkins played in five games for the Jets this season after signing with the practice squad in September. He took 50 special teams snaps. He originally signed with the Bengals as an undrafted free agent out of The Citadel in 2019. He was waived later that training camp and signed with Cincinnati’s practice squad before the Buccaneers signed him to their active roster. He played in 10 games with Tampa Bay and was waived on Sept. 5.

RB Pete Guerriero (5-10, 190)
Guerriero first signed with the Jets on Aug. 25, was released two days later and re-signed on Sept. 1. He was a final cut. An undrafted free agent out of Monmouth University, Guerriero led all FCS backs with 1,995 rushing yards and 142.5 rush yards/game. He was tied for sixth with 18 rush touchdowns and was eighth in the subdivision with 6.69 yards/carry. His career total of 3,974 rush yards is fourth in the history of the Jersey Shore school while his 239 points is third.

DB Zane Lewis (6-1, 190)
The Jets claimed Lewis on Aug. 31 off waivers and signed him to the practice squad on Sept. 6 after he was cut. He originally signed with the Cardinals in May as an undrafted free agent out of the Air Force Academy. He played in 37 games the past three collegiate seasons with the Falcons and totaled 94 tackles, 5 tackles for loss, and 2 interceptions. Lewis, a Richmond, VA, native, played in all 13 games for the Falcons in 2019 and had 45 tackles, 1 INT and led the team with 15 pass defenses, which ranked fourth in the Mountain West. Lewis’ cousin is former NFL CB Shawn Springs, the No. 3 overall pick in the 1997 NFL Draft.

WR Josh Malone (6-3, 205)
Malone spent the first four weeks of the season on the Jets’ active game day roster and had 4 catches for 16 yards. He also had 7 kick returns for 140 yards (20 yds/return). He was then cut and re-signed to the practice squad. He first signed with the Jets’ practice squad in September 2019 and was promoted to the active roster on Dec. 19. He was originally selected by the Bengals in the fourth round of the 2017 NFL Draft and had 7 receptions for 75 yards and 1 score with Cincinnati.

WR D.J. Montgomery (6-1, 201)
Montgomery joined the Jets off waivers on Aug. 30. He joined to the Browns as an undrafted free agent after two college seasons of double-digit touchdown receptions. First in a 10-TD sophomore campaign for Holmes Community College in Mississippi, then another 10 TD grabs at Austin Peay as a senior in 2018. For his two-season Peay career he totaled 61 catches for 1,025 yards (16.8 yards/catch) and 13 touchdowns.

WR Jaleel Scott (6-5, 210)
Scott, a Ravens’ fourth-round pick in 2018 out of New Mexico State, was signed to the Jets’ practice squad on Sept. 10. He was elevated for two games this season and had 1 catch for 16 yards at Seattle in Week 14. He had 1 reception for 6 yards in three games for Baltimore in 2019 after spending his rookie season on injured reserve with a hamstring injury. He played three seasons at Ellsworth Community College before transferring to New Mexico State, where he totaled 76 receptions for 1,079 yards and 9 touchdowns as a senior.

QB Mike White (6-5, 218)
White spent the 2020 season bouncing between the Jets’ active roster and practice squad after he was a final cut in the summer. He spent the majority of the 2019 season on the team’s practice squad and signed a reserve/future deal on Dec. 30. He was selected by the Cowboys in the fifth round of the 2018 draft out of Western Kentucky, where he threw for 8,540 yards, 61 touchdowns and 15 interceptions.