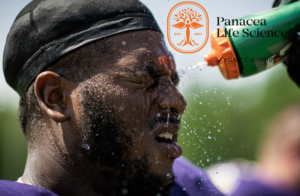 Jackson, Huntley Feel The Heat in More Ways Than One

Today under sweltering conditions the Ravens defense got the better of the offense, but not so much for anything they did. It was more about what the Ravens offense couldn’t get going today in the heat. Lamar Jackson wasn’t sharp. Some passes sailed. Some weren’t on time. Some were behind receivers and another that was nearly a pick-six, was ill-advised. Oh, and then there were a few drops – one by Rashod Bateman on a shallow crosser.

During full-team scrimmaging Lamar lofted a deep pass towards the left sideline to Tylan Wallace. The ball fluttered and hung in the air allowing the scrappy Pepe Williams to make a play on the ball which he nearly intercepted. Later in practice Lamar threw and out (to Bateman I believe) on the left sideline. Lamar waiting so long to throw it that Kyle Fuller almost successfully jumped the route for a pick six. The ball fell incomplete.

There were some bright moments for Lamar who continues to build a rapport with Bateman. Despite being blanketed by Marlon Humphrey the pitch and catch tandem sensed that the back-shoulder throw was in order. Touchdown from 12 yards out. Later in the face of two blitzing DB’s, Lamar threw a beautiful touch pass down the left sideline to Bateman who beat Fuller on the play for a TD from 15 yards out. It was an off day for the Ravens franchise QB although that said, his camp to date has impressed with improvements in accuracy, velocity, ball skills and a greater grasp of the offense.

Tyler Huntley’s day went as his camp has gone so far – poorly, save for a nicely placed ball to WR Makai Polk on an intermediate crosser from left to right. But generally speaking, Huntley seems to look for his first read and then pulls it down to run. The offense with him at the controls for the most part looks out of synch. I’m not sure if it’s his poor play, bad reads by hot receivers, poorly run routes, bad line play or all of the above, but with No. 2 behind center, the offense takes a No. 2.

Ja’Wuan James, for the most part, had a decent afternoon of practice. He used his hands well to keep oncoming defenders at length and steered them effectively away from the quarterback. When he gets in trouble it’s usually because the defender is up in his grill pushing him back towards the pocket. His base/sets could use some polish and strength.

With Tyler Linderbaum out, Patrick Mekari assumed his snaps. It was however, interesting to see Jimmy Murray, a rather lean center listed at 6’5”, 305 pounds, taking on several reps with Huntley behind center. I won’t read much into that for the moment but Trystan Colon is a player that the Ravens once held in high regard as a UDFA.

Daelin Hayes just hasn’t been able to pick up where he left off last summer. So I watched him closely today and he just doesn’t seem to be playing fast. In fact he’s playing with hesitancy. He plays as if he’s overtly concerned about the edge when his keys should tell him to rush the passer. Instead of read and react, he plays like it’s read, read, react. And by then, it’s usually too late for him to make any noteworthy plays. He did however, beat Daniel Faalele for a pressure on Huntley.

Last summer I made note of Mark Andrews running individual drills at times with the wide receivers. This summer, I’m seeing more of the same but this time around, tight end mate Isaiah Likely is right there with him. That might be an indication of how the team views Likely’s role in the offense…Tyre Phillips lined up at left tackle for a few reps. It wasn’t a sight for sore eyes. He made Steven Means look like Lawrence Taylor on one rep, easily sacking Huntley. I have confidence in Tyre to develop into a fine guard. Watching him play tackle triggered flashbacks of Alejandro Villanueva.

Shemar Bridges got off to a fast start in training camp. He has good size and suddenness but lately he hasn’t been as sharp. He looks a bit fatigued in the heat and as a result the suddenness has weened and his route running not quite as purposeful. He’s fallen from the race for that No. 5 spot in the wide receiver room. If the Ravens like his skill set and see him as a worthy developmental prospect, they should have no problem parking him on the practice squad. At this point Binjimen Victor has leap-frogged Bridges as has Jaylon Moore and even Slade Bolden.

Jeremiah Moon will be a guy to watch on Thursday. He comes off the edge with authority and has decent body-bend. It’ll be interesting to see how he responds to the position when the opponent introduces the threat of running plays designed to expose such tendencies. His disregard of the run is obvious during practice. But who knows? There will be a full moon in the sky on Thursday. Perhaps there will be one on the field as well.