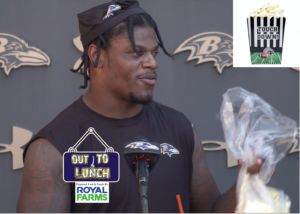 Wednesday press conferences are always interesting, but this week’s was fun. Not only did we hear some of the stars of last Sunday’s victory over the Jets speak, but QB Lamar Jackson handed out popcorn for reporters if their questions were worthy:

If you got a good question, you get popcorn

Perhaps that was a sign of things to come, as Ravens fans may want some popcorn for themselves when Baltimore bouts with the Miami Dolphins this weekend.

Going back to last week’s win, I would be remiss not to mention how I thought Jackson played against New York. In short, it was as expected for me. Not perfect – a clear consequence of rust after zero minutes in the preseason – but good enough to win, with a few special moments.

Again, I won’t claim Sunday was Jackson’s best performance, but I thought it was strong.

This Sunday, however, will begin with a nice gesture by the Ravens organization, honoring the late Tony Siragusa and Jaylon Ferguson.

The team will be wearing helmet decals this season to honor Tony Siragusa and Jaylon Ferguson.

Before Sunday’s game, we will hold moments to recognize both Tony and Jaylon.

As we dive into a full season of football, it’d be easy to forget the players and members of the Baltimore community lost this offseason. It’s great that the Ravens are giving us a chance to remember before Jackson attempts to put on another show against his hometown team.

Baltimore’s QB may not be the only one putting a show on in Sunday’s game, though. Running back JK Dobbins may be set to return, as he was a full participant in practice on Wednesday

Ravens RB J.K. Dobbins (knee) was a full participant in Wednesday’s practice, which means he’s trending toward playing his first game of the season.

Dobbins was limited all last week.

Against the Jets, one of the few weak points was the running game. Without a consistent back in the first half, the entire offense sputtered, an early reminder that balance is key. Once Jackson took to the air consistently, holes did open up for Kenyon Drake and Mike Davis.

Let’s hope they open for Dobbins against Miami if in fact he is a full go.

Alongside the former Buckeye running back, rookie DT Travis Jones returned to practice on Wednesday. He may not quite be fit for Sunday, but Harbaugh spoke on his play at his press conference:

“It was great to get @bigtrav76 back to practice. He looked good out there.” pic.twitter.com/WO4xcoeIdo

Unlike the running game, the Ravens’ defensive line and pass rush was strong against the Jets, frequently hitting Flacco and notching 3 sacks. There was an unrelenting push throughout the game, and that interior pressure is only going to increase when Jones returns to game action.

Wrapping up this week, you’ve probably had enough of me listing players one-by-one. Here’s who did and did not practice on Wednesday:

As for Sunday, I do believe the Dolphins pose a test. Their QB is still in question, but there’s no doubt the offense has weapons. Meanwhile the defense is well coached and looked explosive against the Patriots.

If Baltimore wants to prove its return to being a contender, this will be an early chance to do it.

The post Popcorn Anyone? appeared first on Russell Street Report.