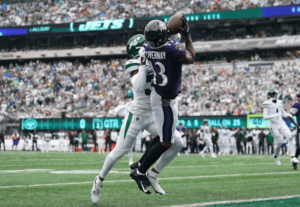 “In the National Football League system, run-first offenses and sustained winning models are considered especially heinous. In Baltimore, Maryland, the dedicated fans who support the front office and coaching are members of an elite squad known as the Purple Patrol. These are their stories.”

…and I truly embrace every aspect of it.

I personally believe the Ravens are building a sustainable winner and a true contender, and there’s no need to comply with the ‘buy-a-team’ mantra or ‘win-now’ mentality.

Now that introductions are out of the way, let’s dive into this week’s Purple Patrol Report, which will focus on the wide receiver room. Over the course of the past five months, the Ravens Twitterverse spread a narrative that Baltimore’s front office and coaching staff was doing a disservice to Lamar Jackson by not signing a splashy free agent wide receiver, and that the Ravens passing offense would struggle immensely because of it.

With Week 1 of the season now in the books, I want to introduce the world to WR2 Devin Duvernay.

On Sunday, the Ravens fanbase got a chance to see what many of us witnessed at camp, and what a month’s worth of camp reports confirmed: Duvernay is a baller. My few opportunities to watch ‘Duv’ at camp left me impressed, seeing noticeable improvement in his route running, ability to create separation, and usage downfield… all things that showed up on Sunday.

Duvernay led all wideouts in receptions (4), and was just one behind Mark Andrews (5) for the team lead. His four targets were third on the team behind Andrews (7) and Rashod Bateman (5), but unlike Bateman, Duvernay roped in 100% of his targets (and didn’t have a drop… c’mon Bate!). His 54 receiving yards were second best on the team behind Bateman, who had 55 of his 59 total yards on his beautiful touchdown catch.

Oh, and speaking of touchdowns, Duvernay had a couple of those too!

Duv’s first score of the game came against Jets cornerback Bryce Hall, with the Ravens WR2 getting a little cushion with his burst. Despite Hall pulling Duvernay back by the shoulder pad (ref should’ve thrown that flag, but never did) a perfectly placed ball was located over 13’s inside shoulder and Duvernay corralled the pass in the corner of the end zone.

Duvernay had 0.1 yards of separation from Bryce Hall, the smallest separation on a TD pass over the last four seasons.#BALvsNYJ | #RavensFlock pic.twitter.com/rmmtKa2mg5

The second touchdown came at the expense of Jordan Whitehead, with Duvernay streaking across the back of the end zone as Jackson climbed the pocket and threw a beautiful (and grossly under-discussed) no-look touchdown pass as Duv elevated and pulled away from Whitehead.

Give this Lamar NO LOOK TD the same love you give Patrick Mahomes pic.twitter.com/dzBF1cPMDV

I’m sure this will get spun into “Lamar Jackson made him look good” and he absolutely threw some dimes to Duv… but Duv created the separation, made plays with sticky hands (*cough cough… Bateman & Likely*) and was a major factor in the Ravens’ win over the Jets on Sunday.

There may still be some debate about how the rest of the wide receiver pecking order looks (I’d currently say Demarcus Robinson–James Proche–Tylan Wallace), but I think the “Devin Duvernay is just a Pro Bowl caliber return specialist” narrative can be put to rest, and I fully expect by midseason the Ravens home games will be flooded with chants of “DUUUUUUUUUV!” while quietly burying the receipts dismissing the Ravens undeniable WR2.