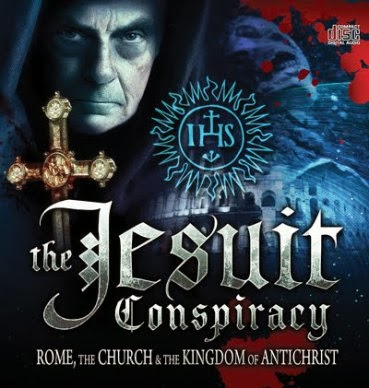 William Boot: “All your writing is sensational and circular between Freemasonry, Illuminati, Communism and the Jews.
You delicately skirt the issue of theCatholic Church and the Jesuits implying the Jesuits are crypto-Jews.
I can assure you, they are NOT!
The Jesuits are CHAMELEONS transforming/morphing themselves into ANYTHING they need to be in order to DECEIVE including JEWS, COMMUNISTS, FREEMASONS, ILLUMINATI or PROTESTANT CHRISTIANS!
I believe you are either in the know or self-deceived and riding the popular JEW conspiracy meme!
I’m not sure who you really are but as a fellow Canadian i’m disappointed! The JESUITS have infiltrated EVERYTHING already and the ROME NWO will RULE the world. It is very clear to me that the Jews are NOTHING but pawns in the bigger scheme of things. I pray you read “Behind The Dictators” by L.H. Lehman publ 1942 and reconsider your standpoint. Rome IS the only International AUTHORITY in the world today that has the power to take control.”
Makow Comment- Like other Freemasons, Cabalists & Satanists, Jesuits no doubt are a subset of the Masonic Jewish Conspiracy but I am sceptical they have a leadership role. That’s why I have never investigated them. I don’t see Jesuits controlling the central banks, universities, and mass media. Bernard Baruch and Col. Edward House were not Jesuits. When William accused me of suppressing the Jesuit role, I invited him to make his case.
(From Sept 1, 2017)
The Jesuits: Unholy Order Of Evil
by William M Boot
(henrymakow.com)
The Roman Catholic Church today is in fact, nothing less than a resurgent “old” Roman Empire described as the feet of iron mixed with clay in Daniel 2:32-33 and prophetically, the last empire in human history.
If so, how has Rome managed to keep her devious machinations, her “corporatization” of the world undetected, so to speak, in order to accomplish her documented, “repeatedly expressed desire” over 1700 years for world domination? The answer is; incremental and finally total control over all education and politics, media and publishing; print and electronic and the “power pyramid” employed to stratify “round table” power groups into layers and to “compartmentalize” them revealing the “master plan” and final “agenda” to only a few at the head of some groups. The papacy working with the Italian “Black Nobility” families are at the top, with the phantom Jesuits; the MEN IN BLACK, behind them, hidden, like the Wizard of OZ, with their hands on the controls. 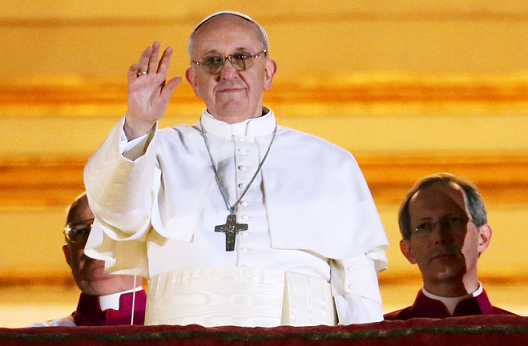 Below them are Rome’s facilitating Knightly Orders of Malta and Columbus, the Benedictines, Dominicans and Franciscans and then all world power groups in layers descending to the base where the ordinary man (corporate slave) toils, oblivious to the power machinations above. The Freemasons, the roundtable groups like the CFR and Bilderbergs, Tavistock Institute, Hollywood, crime cartels (Mafia,) intelligence agencies and all religions are controlled by Rome through this intricate layering of power groups.
The Jesuits ensure the absolute fascist power of the papacy and have worked tirelessly since their formation by Ignatius de Loyola its Catholic Basque founder in 1534, becoming the most hated and feared organisation in the world.
Adhering to Sun Tzu’s principles in “Art Of War” and embracing a Machiavellian mind-set employing infiltration, subversion, division, propaganda, lies, deception and violence they have waged relentless war against sovereign nations, cultures, religions and in particular the Protestant Church. Jesuits are Rome’s assassins, the authors of Mein Kampf, The Protocols of Zion, the adulterated Douay-Rheims Catholic Bible and the sworn enemy of God and mankind in every conceivable way.
I like many, was distracted by the Jewish “controversy,” the trending,”evil Jews control everything” meme. The Jesuits used this same ploy in Germany pre WWII to conceal the collaboration of Cardinal Pacelli, later Pope Pius XII, with Hitler and Himmler in exterminating all oppositional factions to Rome.
ROTHSCHILDS CARRY OUT VATICAN WISHES 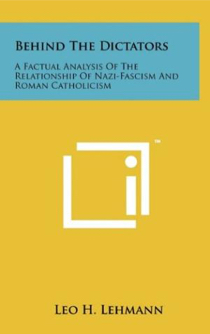 “Hofjuden” are papal court Jews like the Rothschild’s and Rockefeller’s who carry out the orders of the Vatican, particularly in world finance, in return for status and material wealth. I’m not denying that some Jews are guilty of crimes but basically they are a useful “scapegoat” for the Jesuits and act as a diabolically clever “smoke-screen” and distraction for the public. This is really important to understand because once diverted into this ‘Jew meme’ mindset, all enquiry ceases and the cloak and dagger masters (Jesuits) are free to perpetuate their UN, central banking and Israel deception, unhindered. Many Jews work in education, media, publishing, government, military and intelligence, unaware of Rome’s true agenda  working on a “need to know” basis. The Jews are “used” by the Jesuits but have rarely been allowed into the Jesuit order. The Jesuits “hate” the Jews as well as Christians and Muslims persecuting them because of their historical “resistance” to conversion and when opportune they do not hesitate to eliminate them!
Ex Catholic priest L.H. Lehmann wrote this 1942 scathing indictment of the Vatican and the Jesuits, “Brutal cleansing of liberal and heretical members within the Catholic Church itself has always preceded every return to authoritarianism in Europe. The crusades of the Middle Ages began with persecution of the Jews and a purging of Catholic heretical members of the Church. The same happened at the beginning of the wars of religion instigated by the Jesuits in the 17th century. Nazi-Fascism’s anti-Semitic ideology, its anti-Masonic and anti- democratic activities, its very propaganda methods were borrowed from the Jesuit Order. As in Inquisition times, the Catholic Church merely used the Ovra and the Gestapo of the Fascist and Nazi regimes as its ‘secular arm’ to rid Catholicism of its own recalcitrant elements which had become infected with liberal and Protestant ideas during the post-war years. 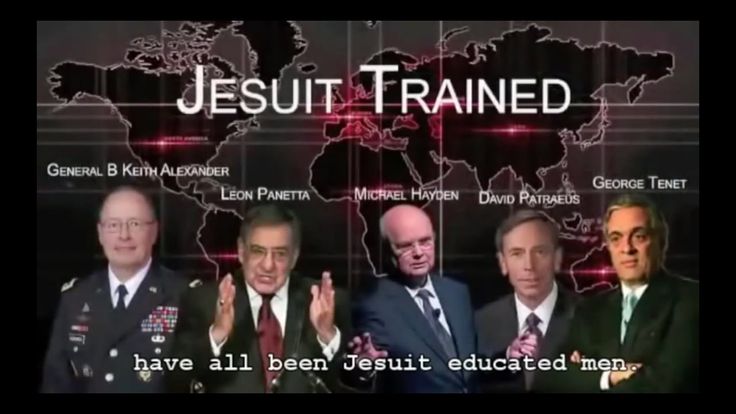 On the other hand, Fascism and Nazism provided the Catholic Church with a new weapon to bring to a successful conclusion its 400-year war against Protestantism and the liberal institutions it had brought into being in the social order, and which had been allowed greater scope than ever to extend its “hated heresy” since the fall of the German monarchy in 1918.” Vatican Policy In The Second World War, Pg 14.
The Jesuits; Society Of Jesus, (essentially a re-branded Knights Templar) usurped the office of the Dominicans as administrators of the papal inquisitions which began in the 12th century and have continued right up to the present time murdering countless millions of people worldwide. Jesuits are trained through indoctrination and deprivation to be mind controlled masters of deceit and blind servants of Rome and will commit the most heinous crimes in order to attain supremacy anywhere in the world.
The Jesuit oaths are blood curdling, being in fact the “cult of death,” always seeking to poison the innocent minds of the young with pernicious Jesuit ideologies such as, Communism, Fascism, Feminism, Scientism, Helio-centrism, Evolution and Atheism. They are responsible for every war, revolution and political assassination in the last 500 years as they attempt to destroy any obstacle to Rome’s ascendency and dominion through it’s NWO. Jesuits control all world banking through London, world governance through the UN and every world intelligence agency. There is no military force they can’t co-opt and using the US military, NATO, the IDF and Blackwater they enforce Rome’s edicts without mercy, daily, anywhere in the world today just as Imperial Rome did 2000 years ago.
Modern history is a Jesuit history, enabling us to understand why the world is so corrupt and violent and the truly malevolent, satanic force driving it!
William is planning a new website dedicated to this subject.
RELATED–Debate  Michael Collins Piper Vs Eric Phelps – Zionists Versus Jesuits
PRO:  Behind the Dictators – on Amazon
The Jesuits:Priesthood Of Absolute Evil Revealed
Vatican Policy In The Second World War – L.H. Lehmann
The Epitome Of Evil: Did The Vatican/Jesuits Create Hitler And The Nazis?
Vatican Assassins – Eric Jon Phelps
Interview With Dr Alberto Rivera
Secret Jesuit Oath
CON:
The Fallacies of the Jesuit Conspiracy Theory
How Cabalist Jews Became Jesuits & Took Over Catholic Church
First Comment by Carl B:

The Paraguayan Reductions was a Jesuit revolution that established a communist, atheistic state in Paraguay in the 1730′s, 10 years before French founder of communism Victor d’Hupay (considered to first to formulate the idea) was even born! This from ex Catholic R.W. Thompson in “Footprints of the Jesuits.”

Findlater in “The revolutionary movement: A Diagnosis of world disorders” writes that a 500 year earlier version of the Protocols of the Elders of Zion can be found in devout Catholic Quirinus’ Letters from Rome on the Council.”

There is no intermediary between Jesus Christ and man, there is no vicar. The church was not established by Peter the rock, the rock is Christ.

Pray directly to Jesus Christ. Use the lords prayer and don’t worry the Catholics don’t burn you for reading the bible anymore. Just like with the Pharisees perverting the Torah; massive institutions like the Catholic church perverted the teachings of the New Testament with their own “traditions of man.” Imagine what Christendom would look like if the Church had not tried to kill everyone who wanted to read the Gospels or if they did not use Indulgences or attempt to create atheist golems like in Paraguay almost 500 years ago.

Tony B:
(Sigh.)  This guy sounds like me before I actually read the writings of Catholics instead of just those of Catholic haters, either lifelong protestants or ex Catholics grinding axes they were extremely likely to have been responsible for themselves.  After all, Protestantism has greed, lust, murder and wholesale lies to cover its establishment crimes as its iffy foundation and would not even exist except for the Catholic Church which was the only Church established by Jesus Christ and the only church of any kind for many centuries.
If they ever read actual Catholic writings from down the centuries they would be astonishedly ashamed of themselves.
Question for Boot:  Why is it that the Talmudists have emphatically declared down the ages and the masons have shown by action that the Catholic Church is their only real enemy?  That is, until Vatican II when the Freemasons took over the Vatican, still misruling the Church from there, driving multi-millions of faithful Catholics away from this imposed masonic farce of the Christian religion?
Moreover, the truth of history is that whatever the later day V2 Jesuits are now, infested with both Talmudists and masons, the organization, Society of Jesus, was created by now Saint Ignatius to prevent a Talmudic takeover of the Church in his time.