David Halperin, in his Intimate Alien book I’m perusing at the moment, provides that Richard Shaver of The Shaver Mystery spent many years in mental institutions right before he contacted Ray Palmer with his fantastic tale of the deros and teros who inhabit the (inner) Earth and have brought woes upon Earth’s above-top residents.

That those inner-Earth inhabitants were said by Shaver to be the “ Elder Races” – “humans but not quite human … near-immortality ancestors” caused me some alarm, as that’s almost the premise of my Substack and blog theme: the gods of old still exist (and may be responsible for UFOs, the UFO idea not part of my Substack/blog theme, but ready for a presentation here and elsewhere).

The Shaver Mystery is far loopier but my views are not far behind, and it worries me that I’m so close to “mentally deranged Shaver with such thinking.

With my psychological background and ongoing Psycho-metric corporation one would think I’d be gung-ho with the psychiatric evaluations of schizophrenia, psychopathic personalities, and all the other epithets in the journals of psychiatry provided for those with what’s commonly known as “mental disease” but I’m not, as some of you know.

I’m in a kind of agreement with Thomas Szasz who, in many books and conferences, badgered the psychiatric profession, of which he was a part, about their errant designations and profession.

One of his books that outlines his views, in toto, is this – note that it wasn’t first published in 1750:

A serious evaluation of schizophrenics and other jabbering individuals (in and out of various facilities) shows them with access to or being influenced by intrusions from outside their being; that is, they are really being assaulted  by sounds and noises they are so strong they disrupt their ability to function, as a “normal” individual does.

Richard Shaver’s so-called “mystery” is tooted in a truth perhaps [sic] but ends up being bastardized by other mental intrusions, perhaps [sic] that make it almost insensible.

This is what happens to most persons who are said to have schizophrenia or other dissociative mental illnesses. 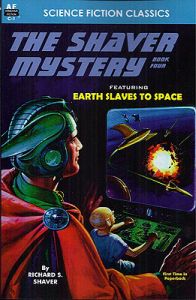 (I’ve never paid much attention to the Shaver Mystery and find its attention in Halperin’s book to be a bit much but it did open my eyes to the idea that others are seeing divine-like intervention in the UFO mystery and I saw a link to that idea on Facebook 6/15/21.)

Getting back to my point: the idea that UFO witnesses and especially alleged abductees (experiencers) – a topic I also eschew usually – have a mental disruption providing episodes that Szasz says psychiatrists see, wrongly, as bizarre mental aberrations, but are actually put upon by insertions from something or “someone” outside those persons’ biologic being (and normal mental configuration).

UFO observers or persons who think they’ve encountered alien (ET) beings are having a real experience but one created extracurricular to a person’s mental condition, as proposed by my pal José Caravaca’s Distortion Theory.

When it comes to videos ad radar returns of “objects” spotted by military personnel and others not mentally reconstituted momentarily, those are actual intrusions into our air space or waterways by actual solid (material) constructs, from where or by whom?

Not Shaver’s deros or teros but remnants of the ancient gods, living today, in exquisite seclusion somewhere on Earth or close by, yes, close by.

The possibility intrigues me, but I understand that it stretches credulity for most of you.

However, in my “research” of academic papers and uncorrupted (by errant and biased translated) ancient texts show unequivocal evidence for the possibility that the ancient divinities were near-immortal and may still be extant for that reason, explaining some UFO accounts and particularly encounters.