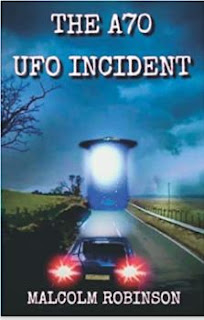 I’m a little over half-way through the Kindle version of Malcolm Robinson’s updated account of the alleged alien encounter and kidnapping of two hearty fellows while they traveled on the A70 highway in Scotland in 1992.

The tale with its elaborate hypnotism regression sessions and  Malcolm’s usual intense scrutiny and research details what appears to be a credible episode of UFO abduction, something that I ordinarily discount almost prima facie.

But the book was a freebie from Amazon and Malcolm is one of my favorite UFO authors. (His heavily researched book about the 1973 Robert Taylor/Dechmont Woods encounter is a primer on how UFO events should be handled.)

Now I think that something happened to the two fellows who believe (and hypnotically confirmed) they were assaulted aboard an extraterrestrial craft that grabbed them one night as they traveled from work.

Their accounts, while conscious and under hypnosis, have the ring of truth and extreme fantasy. That’s not to say they made up the story but that their experience is beyond normalcy and even stretches the apparent credulity of psychoanalytic regression.

(You need to read the book for the detailed accounts of their experience and aftermath to appreciate what happened. Martin Black got the book and I await his analysis, especially as he’s dubious about hypnosis as a reliable tool for accessing truth or reality.)

Let me write that the imagery the men culled from their hypnotic sessions are an encyclopedic rendition of sexual symbolism, conscious and unconsciously.

But also, nightmarish images they recount strike at the medieval reports of the incubus and succubus attacks on men and women as they slept, and also the recalled appearances of their kidnappers have all the hallmarks of fairy tales from the brothers Grimm and other folk-tellers of the middle ages and later.

Moreover, UFO abduction fanatics and promoters of the ET versions for UFO visitations have to be tempered by the reported activities of the alien kidnappers: the behavior is anything but advanced, the entities barbaric in their activity, sadistic even malevolent.

I’ll delve more into this as I finish Malcolm’s book. (It’s a 500+ page read in the Kindle version.)

Yet, something happened to or affected the men  Malcolm has so dutifully presented.

What really happened or seemed to is up for grabs, that’s certain.