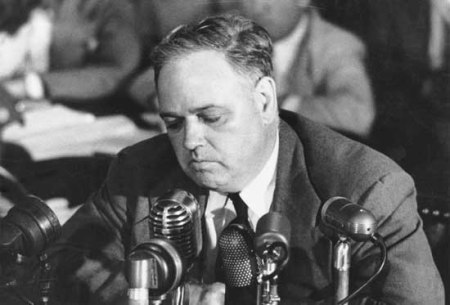 Whittaker Chambers, 1901-1961. When he exposed Alger Hiss, he exposed the Deep State
I hope “my testimony helps to make Americans recognize at last that they are at grips with a secret, sinister and enormously powerful force whose tireless purpose is their enslavement.” KGB Defector Whittaker Chambers Aug 3, 1948
If the US were not already Communist-controlled, Whittaker Chamber would be known by every student as a great patriot, and Hollywood would have made an Oscar Best Picture about him.
In 1948, Whittaker Chambers, a Senior Editor at TIME magazine and former KGB agent, exposed Illuminati factotum Alger Hiss as a Soviet spy and espionage agent.
Alger Hiss began his career as a student of Felix Frankfurter and was an advisor to FDR at Yalta.  He was Secretary General of the UN at its founding conference in San Francisco in 1946!!!
Hiss then became President of the Carnegie Endowment for the Preservation of Peace whose directors (and Hiss supporters) included Secretaries of State Dean Acheson, John Foster Dulles and future President Dwight Eisenhower. It also included David Rockefeller and IBM’s Thomas Watson. Do we need any more proof? Communism is sponsored by the satanist (Masonic) Jewish central banking cartel.
The Whittaker Chambers-Alger Hiss case outed the Cold War by revealing that the United States and Russia are both controlled by superrich Freemasons dedicated to the triumph of Communism.
Far from being a Russian phenomenon, Communism, in fact, is monopoly capitalism, the creed of the super-rich. Except they want a monopoly over EVERYTHING, spiritual, intellectual AND material. They are behind the Clown world. This is the NWO. 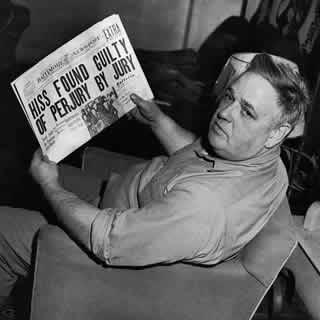 Inveterate liars as Communists are, Hiss denied everything until Chambers finally produced espionage material in Hiss’ handwriting. Hiss served three years for perjury.
John Beresford tells the fascinating story in an excellent series of 36 short lectures and in a typescript here. Chambers’ gripping book is Witness (1954) would make an incredible feature film, but it will never be made. Chambers is a much greater patriot than George Washington, but few Americans have ever heard of him. Isn’t that a measure of national enslavement?
Add up the assassination of JFK and his brother, 9-11, the numerous mass shootings, censorship, migration and the war on gender, you can see that we are caught on the talons of a malevolent force. We are being ushered into a new world where “slaves come to love their servitude.”
Cognitive Dissonance: Why would a party dedicated to the overthrow of the government, the theft of private property, and the destruction of family and liberty, be allowed? When it serves the diabolical agenda of the superrich, not the poor.
Communism is Judaism. Cabalist Judaism is Satanism. Mankind is satanically possessed.
from May 5, 2019
By John Berresford
(henrymakow.com)
On August 3, 1948, at 11:00 AM, Chambers opened by reading a statement to HUAC:
Years before, he said, he had reported what he knew of Communist activity to the government – this was back in 1939 when he talked for hours with [Adolf] Berle under the elm tree – and, as far as he knew, the government had done nothing about it.
What he reported, he said, was The Ware Group, a secret, underground “apparatus” of young, entry-level bureaucrats in the New Deal years. Its purpose in those years, he said, was the infiltration of the government by secret Communists, not espionage. A long-term goal was espionage, but the Group functioned day to day like a left-wing study group – you might think you had walked into a college course in applied Marxist thought. 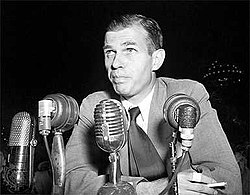 All its members were secret members of the Communist Party, however, dedicated to the someday violent overthrow of the US Constitution. Chambers named seven names; the fourth name he named to the Committee and the world was Alger Hiss…(left)
Chambers’ words had flair: “Disloyalty is a matter of principle with every member of the Communist Party. The Communist Party exists for the specific purpose of overthrowing the Government, at the opportune time, by any and all means; and each of its members, by the fact that he is a member, is dedicated to this purpose.”
“It is 10 years since I broke away from the Communist Party. During that decade, I have sought to live an industrious and God-fearing life. At the same time, I have fought communism constantly by act and written word. I am proud to appear before this committee. The publicity inseparable from such testimony has darkened, and will no doubt continue to darken, my effort to integrate myself in the community of free men.

“But that is a small price to pay if my testimony helps to make Americans recognize at last that they are at grips with a secret, sinister and enormously powerful force whose tireless purpose is their enslavement.
“At the same time, I should like, thus publicly, to call upon all ex-Communists who have not yet declared themselves, and all men within the Communist Party whose better instincts have not yet been corrupted and crushed by it, to aid in this struggle while there is still time to do so.”
———————-
Related- Makow – We have de facto Communism
———————What is Communism?
——————– FDR Turned Blind Eye to Soviet Spies