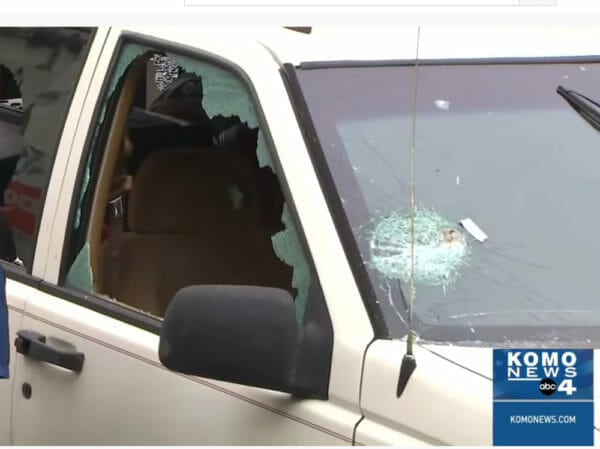 U.S.A. –-(AmmoLand.com)- At 03:00 a.m., in the Seattle lawless zone, known as CHAZ or CHOP, two children were killed by what some refer to as CHOP security.

A couple of minutes before 3 a.m. in the early morning of June 29,  according to the clock on a surveillance camera, the latest shooting at the CHAZ or CHOP occurred just outside the border of the lawless zone. Two teenage boys in a Jeep Cherokee were gunned down. The 16-year-old is dead, the 14-year-old is in critical condition.

Video of CHAZ/ Chop Shooting where you can count the shots.

The Seattle Police Chief said it was obvious the crime scene had been disturbed by numerous people.

No one has reported finding any weapons at the scene. The car window on the passenger side of the Jeep was rolled up, as can be seen by the shattered glass around the frame.

A car’s headlights come around a corner, perhaps 15-20 mph, a bit fast. There is a single shot at 0:54 in the video. A few seconds later, the vehicle appears to bump in a barricade at a slow rate of speed, then two shots,  then another bump into a barricade. The vehicle stops. Then, another seven shots. After a couple of seconds, the vehicle backs up slowly, stops, gets back into gear,  and at a few miles per hour, bumps the barricade again. The Jeep stops for a final time. Then from 1:18 to 1:24 another controlled string of 10 shots.

It is impossible to tell if any of the shots come from the vehicle.  No muzzle flash was noted in the video. The sequence of shots is compatible with two ten-round magazines.  One shot, then two, and then seven for a total of ten; then a spaced sequence of 10, as the vehicle is stopped in the final position where it came to rest.

The last 10 shots do not appear to be justified. The driver seems impaired. No gunfire can be discerned coming from the vehicle. After the vehicle is stopped, it seems the last 10 shots are fired into it to finish off the occupants.

Given the rolled-up passenger window, the notion shots came from the vehicle first, if at all, seems unlikely.

Two members of the Seattle City council refused to express any responsibility for the deaths, or to hold anyone in CHAZ/CHOP responsible.  On KOMO, Lorena Gonzales, City Council President, claimed unscrupulous gun dealers and too many guns were to blame. 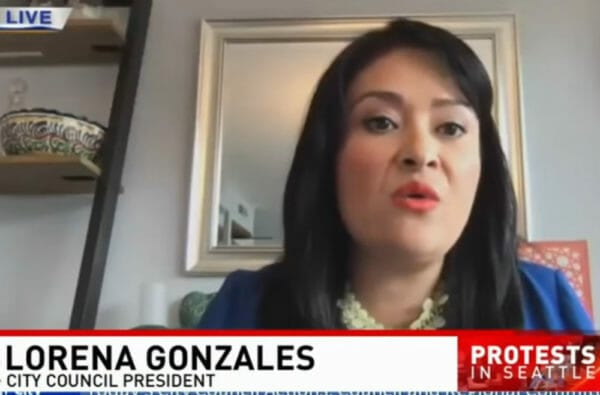 Councilmember Kshama Sawant proclaimed the “movement” was not responsible for any of the violence. 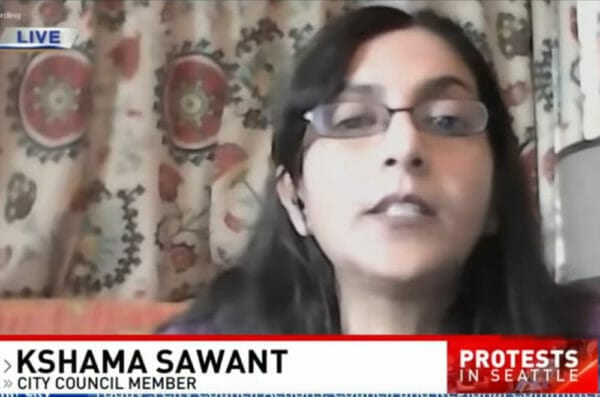 Leftists are quick to claim someone else is responsible. They are never responsible, at least in their own minds.  One of the major purposes of Leftist movements is to eliminate personal responsibility and replace it with group responsibility, which is to say, no one is personally responsible, and whole groups can be punished for perceived or imaginary problems.

One of the problems with defunding the police, in a sane society, is it is difficult to assign responsibility for any action without proper investigations and evidence. No one has the responsibility to collect evidence. No one at CHAZ/CHOP seemed concerned with gathering evidence.  Seattle Police Chief Carmen Best said the “protestors” were not cooperative. From bbc.com:

Chief Carmen Best, from the Seattle Police Department, said they had found a white Jeep “riddled with bullet holes” near one of the concrete barriers to Chop.

She also accused protesters and residents of “not being cooperative with our requests for help”, and said the zone was now “not safe for anybody”.

People at CHOP were quick to claim the vehicle was the same one involved in another incident, earlier. That is far from clear. Some commenters are saying the vehicle merely looked similar.

If the 14-Year-old survives, he may be able to tell us his side of the story.

The audio of the gunshots and the rolled-up window in the Jeep make the working hypothesis of murder a valid one.

Source: https://www.ammoland.com/2020/07/did-seattle-far-left-security-murder-and-assault-black-children/
Before It’s News® is a community of individuals who report on what’s going on around them, from all around the world.