Big Man Joe, Here Look, You know I like kids more than people.

Stock here — I watched the whole thing, somewhat in awe and not in a good way.   Took 3 pages of notes and was prepared to do a write up today.     But….Zerohedge being controlled opposition, I didn’t expect them to put together a scathing report on the Big Guys “performance” aka debacle, but they did.

With selected video clips and all.   And so here I preserve the record.   Credit ZH

A few points from my notes not covered by ZH

Joe wants to “Create” 7,000,000 jobs this year.   Not “restore” 7,000,000 jobs, but actually create them…..it’s a curious use of words.   Is it just self promotion, or is the idea to create a whole different class of jobs that didn’t exist before.   Just saying, something to think about

He mentions Walgreens several times….they must be kicking in big money to the Big Guy.   Reason I keep up the meme of “Big Guy” is the infamous skim that was documented in emails showing that Joe Biden (the Big Guy) got a cut off the payments going to Bag Man Hunter in the now infamous Ukraine and China influence peddling (aka bribery / extortion).

He says this in relation to the 50% ads that contain bi-racial couples.    Think of the percent that represent a traditional Caucasian nuclear family, its quite low.   And with a very intentional purpose.

And then he gets creepy with a 7 year old girl, among other things, calling her “baby” and saying “you are getting old”.   SERIOUSLY!

The question I have to keep coming back to — are they intentionally performing these stunts…picked these actors to create outrage?

COOPER: “You’ve already spent a great deal of time at 1600 Pennsylvania Avenue. Except now you’re living there and you’re president. It’s been four weeks. What’s it like? How is it different?”

BIDEN: “I wake up every morning, look at Jill, and say ‘where the hell are we?’” pic.twitter.com/vdAjxUnWOT

The president faced no pushback from Mr.Cooper for failing to denounce China’s Uyghur genocide calling it a “cultural norm”, or claims that black or brown ‘folks’ don’t know how to use the internet, that military is fueling the “growth of white supremacy, or the fact that he wakes up every morning wondering “where the hell are we?”

As Summit News’  Steve Watson details below, the question, after watching this, should be “this guy is in charge now?”

When Anderson Cooper asked the hard hitting probing question ‘What is it like to live in the White House?’ Biden responded by stating “I wake up every morning, look at Jill, and say ‘where the hell are we?’”

Surely this will be comforting for Americans to hear.

Elsewhere during the car crash exchange, Biden claimed that former military and former police officers are fueling the “growth of white supremacy,” while claiming President Trump refused to condemn it:

Later, Biden went on to claim that people of color don’t know how to use the internet:

He also found himself in a bind when he uttered a ‘racist’ fact:

Joe Biden says “bIack on bIack crime” is the primary concern of many minority communities, not police brutality, and then stops himself mid sentence realizing he has just committed the cardinal sin of uttering aloud a hate-fact. #BidenTowhall pic.twitter.com/ixHYdVgolz

When it comes to racism in communist China, however, that’s just a “cultural norm”:

“If you know anything about Chinese history, it has always been the time when China has been victimized by the outer world is when they haven’t been unified at home,” said Biden, going on to say that President Xi Jinping is aiming to achieve a “tightly controlled China.”

“I’m not gonna speak out against what he’s doing in Hong Kong, what he’s doing with the Uyghurs in the western mountains of China…culturally there are different norms that each country and their leaders are expected to follow,” he added.

Turning to the ongoing coronavirus crisis and the slow uptake of the vaccine in the US, Biden predictably blamed Trump for ‘wasting time’ with the vaccine rollout (despite the fact that Trump’s administration defied all odds to get the vaccine distributed in record time):

Biden also blatantly lied and claimed there was no vaccine when he took office:

Does he really believe Americans can’t remember as far back as 30 days ago?

When asked when he sees lockdowns and mask mandates ending, Biden said he ‘hopes’ it’ll be over in A YEAR: 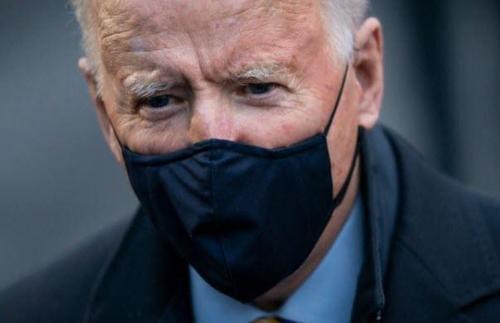 As LibertyNation’s Mark Angelides points out, it appears by the lack of coverage of this disaster that America’s Fourth Estate has entered a new era of wilful blindness:

When statements from the president are downplayed or ignored by the legacy media, it begs the question of who can be trusted to deliver the news. There is an ongoing censorship war between social media giants and smaller boutique outlets that do not follow the party line. This situation has gone far beyond which service is most likely to deliver factual information and has descended to the point where the sins of omission are not only ubiquitous but also destructive.

News has a duty to be informative, regardless of whether that information is personally damaging to the White House occupant.