Establishment voices are finally, grudgingly admitting that murders and shootings are up spectacularly in 2020. But the reasons, they all agree, are immensely complicated and rather boring.

Perhaps, they muse, it has something to do with lockdowns? Or there could be any number of other subtly interacting factors. Who can tell? In any case, this mysterious rise in violence is beyond the comprehension, much less the control, of politicians. For example, Nate Silver’s FiveThirtyEight headlined:

Trump Doesn’t Know Why Crime Rises or Falls. Neither Does Biden. Or Any Other Politician.

So there’s no reason to consider the sudden rise in slaughter in the cities when casting your vote this fall. Crime isn’t something immediately threatening like climate change where voting matters. Instead, the rise and fall of crime is a vast, mysterious process, reminiscent of continental drift in its inevitability, which public policy and media opinion couldn’t possibly affect. Indeed, wouldn’t you rather read about some outrageous tweet by Trump than about this intensely tedious giant outbreak of gunfire?


Seriously, the current shooting spree in our cities is one of the simplest, most flagrantly obvious phenomena in the history of the social sciences.

Consider this Chicago Tribune graph of shootings (i.e., number of people killed or wounded by bullets) in the Windy City: 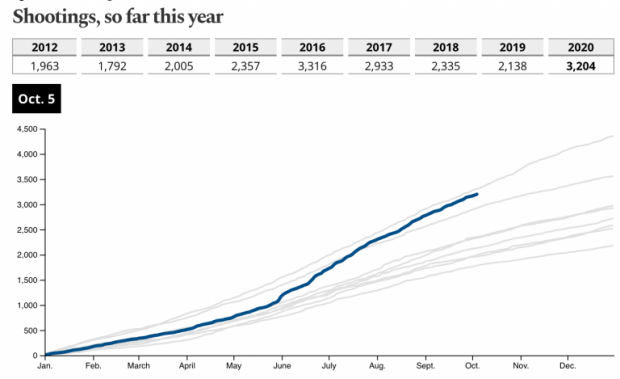 Despite the weirdness of the coronavirus lockdowns that began in March, 2020 had been a pretty normal year for shootings in Chicago up through late May. Yet notice the sudden kink after Memorial Day in the blue line representing the total number of those shot so far this year. Over a single week at the end of May, Chicago shifted to a new, more violent slope.

Did anything happen in late May that encouraged criminals and discouraged cops? The data journalists appear stumped when they try to think back that far. But, as you may recall (it was in the news at the time), George Floyd died in police custody on May 25, and three days later the Democratic mayor of Minneapolis let rioters burn down a police station. From there, looting and rioting spread nationwide as the press and universities extolled the Mostly Peaceful Protesters.

Similarly, here’s the NYPD’s graph of shooting victims in New York City with 2019 in red and 2020 in yellow: 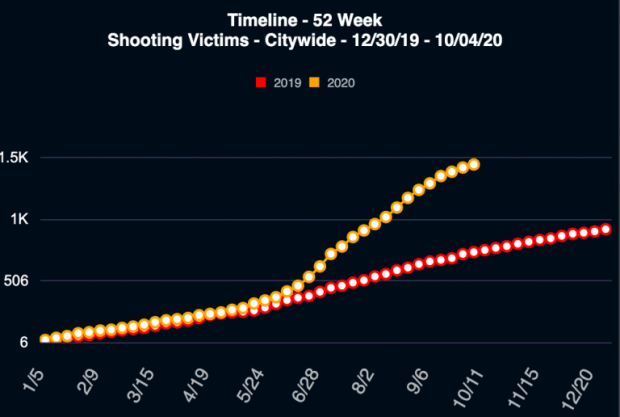 Once again, 2020 was running strangely similar to 2019 despite the severe death toll NYC had absorbed in early April from the pandemic.

New York City, which has probably been the best policed big city in America in this century, did not see a rise in shootings as fast as Chicago did. But then in the first week of June 2020, gunplay ramped up and subsequently exploded in the second week of the month, the time of Floyd’s jaw-dropping funeral, with 72 victims versus 14 in the same week of 2019.

Through the end of May, 2020 shootings had been up 18 percent over 2019 in New York City. But in June through September, the number of killed or wounded has been an insane 156 percent higher than last year.

“Wouldn’t you rather read about some outrageous tweet by Trump than about this intensely tedious giant outbreak of gunfire?”

National trends have been similar to Chicago and New York. According to Wikipedia’s list of mass shooting incidents (which it defines as four or more wounded or killed), the number of people struck in mass shootings was up 14 percent over last year through the end of May. But in June through September, the number of victims of mass shootings grew by 61 percent from 1,005 in 2019 to 1,621 in the Summer of George.

One bit of good news has been that the mass shooters’ aim has been worse in 2020 than in 2019, with a higher ratio of wounded to killed. One reason is because highly lethal school and church mass shootings have declined from ten at this point in 2019 to only two this year, no doubt in part because schools and churches have so often been closed due to the virus.

Another cause is because even more than in 2019 when blacks, at 13.4 percent of the population, accounted for 55.9 percent of all murder offenders in the recently released FBI statistics, blacks appear to have been responsible for most of the mass shootings during the Summer of George.

The post Slaughter in the Cities appeared first on LewRockwell.