From the Dan Bongino Show’s description of this episode in his Show Notes (a.k.a. Newsletter!):

In this episode, I discuss the stunning election video out of Georgia, and the pathetic attempts by insiders to explain it away.

This is an episode that you can not miss!  I actually think they are all that way, but there are some very special and important things that Dan discusses that I hope you will want to see.  You’ll soon understand why this episode is very important.  This is something for your information, that will show that the Demonicrats would do or try about anything to get into office.

First of all, I just had to love the segment of this episode where Dan debunks the debunkers in the lying mainstream Fake News media networks.  In that now famous Episode 1408 from last Friday, where Dan shows and discusses the video of the possible shenanigans in the Fulton County vote counting episode.  Of course, the now infamous gaslighters – I mean fact checkers – immediately pounced, and tried their hardest to debunk the story about the video.  Nice job, debunkers!  Dan thoroughly demolishes the debunker’s conclusions, as you’ll see.

When he began this episode, Dan remarks on a column in The New Yorker, which tried to say that people would distance themselves from President Trump, if he actually ends up losing.  The person that wrote that opinion column is obviously unaware of the loyalty of the Trump supporters.  Not in the least.  In fact, most of us believe that President Trump was one of the best Presidents ever, and will believe that for as long as we live.  As he is discussing why he is a loyal supporter, Dan tells us a couple personal stories to explain why he is so loyal to President Trump.  It was kind of a tear jerker moment for me during that segment.  I originally intended to write about a personal experience I had that kept me loyal to President George W. Bush, until years later (like when candidate Donald Trump came along).  So, I get the part about meeting a President and First Lady in person at the bottom of the stairs to Air Force One.  It took me awhile, but I was eventually able to redirect my loyalty to who I appreciated the most. 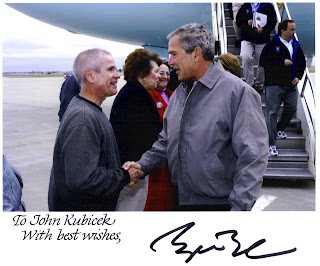 Well, my reluctance to distance myself from President Bush was well fed by President Obama, too.  I always loved those memes where George W. says, “Miss me yet?”

Dan got to a story at the end of the show that I was VERY aware of.  It involves the election for the Iowa Congressional District 2 for the Representative to Congress.  In 1969, a Congressional Act was created  that allows the House to decide who wins an election if there is a close election.  The Demonicrat candidate, Rita Hart, decided to go to Nancy Pelosi to get her help to win the seat.  Dan has a good explanation as to why this story is meaningful, and why Rita Hart chose this path to go to Washington DC.  Do you think a deal was made to assure Rita that Nancy Pelosi would use her power to overturn the voters here in Iowa, even if it was just by six votes?  And yet, then again, the Trump voters are just supposed to roll over and let an election rife with voter fraud be over and done?  I don’t think so!!

In the future, I really wonder what people will think about 2020, with the Election, the Corona “China Virus” pandemic (some call it the plandemic), and the Derecho in August here in Iowa.  I don’t know about you, but I doubt I’d ever forget it; but if I do, I’ll have this blog site here to remind me.

Please enjoy the episode, and if you could, let Dan know he is still in your prayers.

Because I know that Dan Bongino would prefer that I embed the Rumble.com video here, I am now doing that! It finally came to me how to do it, and I am very pleased, because it doesn’t require me to use the JavaScript code to do it! So, when you are watching, you will not be seeing it via youtube.com again. Nope, not here. Ever!  No more screwtube embedded video here! Forevs! So, it’s now RUMBLE all the way, Dan.  For Dan’s show page on Rumble.com, click here.

Be sure to see the SHOW NOTES for Episode 1409 for related news stories.

Looking for news? The Bongino Report brings you the top conservative and libertarian news stories of the day, aggregated in an easy to read format to assist the public in getting accurate information.