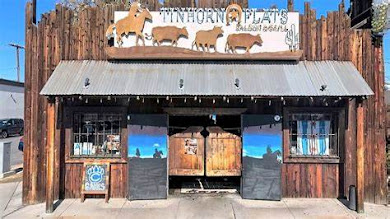 Clarice Feldman’s weekly (Sunday) column at American Thinker is always worth reading.  This past weekend, she highlighted a true American success story 2021-style – all the more inspiring because it took place in California.  Who would have thought?  Here’s the beginning of her post titled “The Battle of Burbank” at Tinhorn Flats:

It’s believed the Battle of Lexington and Concord was the fight that set off the American Revolution. While a battle at Burbank, California has received less notice, to me it is inspiring – a community’s refusal to bow to petty, irrational, and illegal bullying.

The story is fully recounted by Robert Morton, and I urge you to read it in its entirety, but here’s my synopsis.

Tinhorn Flats is a family-operated bar and restaurant in Burbank. Burbank has had a death rate from the Wuhan virus  of 2.8 percent of which 80 percent were of those over 65 who had, on average three co-morbidities.

Despite this, and disregarding the substantial sums restaurant and bar owners had shelled out to keep outdoor patrons safe, on December 6 the city council ordered all restaurants closed. Tinhorn refused and continued to serve patrons outdoors. Six days later their health permit was revoked. Tinhorn continued its outdoor service, ignoring the city’s revocation of its permit. In response, the L.A. County Department of Health cited the restaurant 13 times for operating without a permit. Tinhorn stayed open.  The L.A. County Attorney filed a cease and desist order. Tinhorn stayed open.

When the padlocked doors were somehow reinstalled, the restaurant posted on Facebook a picture showing a side door open. Tinhorn stayed open.

Another L.A. County judge required the county to prove that the ban on outdoor dining was necessary. The county failed to do so, but inexplicably the judge refused to lift the ban.

Nor do they realize that nothing will stop me or anyone else from patronizing this business.  We are the ocean of freedom and we will flow around any obstacles in our way.  The Burbank City Council will look like the idiots they are in trying to shut down this place.[snip]

Like a desperado who is riddled with bullets but just won’t stop, Tinhorn Flats remains open. The latest chapter in this saga finds the Burbank Fire Department showing up at Tinhorn Flats on Wednesday night to remove a padlock… one that city officials had placed there earlier that morning.

Why? Because as soon as officials left, Lucas Lepejian cut off a lock on a side entrance and reopened the Old West-themed restaurant and bar, reports FOX 11.

After cutting off the padlock, Lepejian let customers in and continued serving them food and drink although the front door remains padlocked, creating what Burbank officials call a “life-safety hazard.”

Standing up to bullies is the only way to defeat them.

The rest of Ms. Feldman’s column (on other subjects) is here.