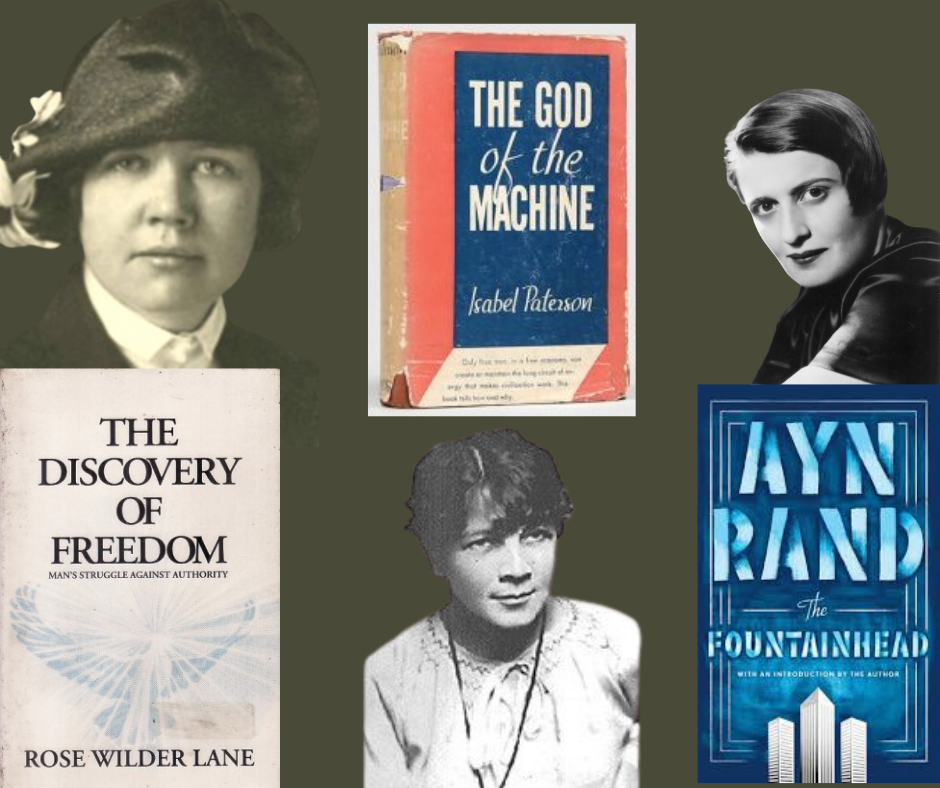 In 1943, as collectivist policies were ascendant, an extraordinary thing happened. Three women published three books that year that would jolt Americans from their socialist stupor and remind them of the fundamental American values of individual liberty, limited government, free-market capitalism, and entrepreneurship. This Women’s History Month is an ideal time to reflect on how Rose Wilder Lane, Isabel Paterson, and Ayn Rand helped to catalyze the 20th century libertarian movement.

The “Libertarians of ‘43,” as Paterson biographer Stephen Cox dubbed these women, were outspoken advocates of American individualism and human ingenuity, and vocal critics of socialist ideology and big government policies. Cox explains that “women were more important to the creation of the libertarian movement than they were to the creation of any political movement not strictly focused on women’s rights.” The work of these three women continues to inspire a new generation of libertarian writers today, with their message more urgent than ever.

The daughter of Laura Ingalls Wilder and Almanzo Wilder, Rose Wilder Lane is “Baby Rose” who many of us remember from the ninth book in the Little House on the Prairie series, The First Four Years. Born in 1886 in Dakota Territory, her years of growing up on the prairie likely instilled in Lane a sense of rugged individualism and self-reliance that ultimately found their way into her writings throughout the 20th century. Initially sympathetic to the ideas of socialism during World War I, she became one of its fiercest opponents after visiting the Soviet Union and parts of Europe with the American Red Cross and witnessing widespread corruption and the eradication of personal freedom. When she returned to the US, she wrote widely, publishing books and writing articles for outlets such as Good Housekeeping, McCall’s, Ladies’ Home Journal, Harper’s, and the Saturday Evening Post.

By the late 1920s, Lane was reported to be one of the highest-paid women writers in the US. She became a vocal critic of Roosevelt’s New Deal, Social Security, and other government programs she felt disempowered individuals and gave greater authority to the state. In 1939, Leonard Read, who would go on to launch FEE in 1946 as the country’s first libertarian think tank, republished an expanded version of one of Lane’s earlier influential essays, Give Me Liberty, where she describes her evolution from socialist-communist sympathizer to staunch individualist: “Many regard the collectivist State, as I did, as an extension of democracy. In this view, the picture is one of progressive steps to freedom,” she wrote. She went on to describe her experience living in the Soviet Union and seeing the results of collectivist policies first-hand:

“I came out of the Soviet Union no longer a communist, because I believed in personal freedom. Like all Americans, I took for granted the individual liberty to which I had been born. It seemed as necessary and as inevitable as the air I breathed; it seemed the natural element in which human beings lived. The thought that I might lose it had never remotely occurred to me.”

This essay set the tone for her influential 1943 book, The Discovery of Freedom, where she persuasively promotes individual liberty, limited government, and free markets. She explains how American freedom unleashes the full capacity of the human mind to discover and invent, thus leading to unprecedented progress and prosperity for all. Lane writes:

“Human energy works to supply human needs and satisfy human desires, only when, and where, and precisely to the extent that men know they are free. It works effectively only to the extent that Government is weak, so that individuals are least prevented from acting freely, from using their energy of body and mind under their own individual control. All history shows this fact. Every detail of common experience today proves it. The electric light proves it; the car in the garage proves it. How did Edison create the electric light? How did Americans create the millions of American cars? They used free thought, free speech, free action and free-hold property. The unhindered use of natural human rights creates this whole modern world. Nothing else makes it possible for men to create new things, and improve them and keep on improving them.”

Lane’s contemporary and early ally, Isabel Paterson, echoed Lane’s ideas on individualism and freedom. Like Lane, Paterson was a prolific writer and enthusiastic proponent of libertarian ideals. Also born in 1886, in Canada, Paterson’s poor family moved around the American west and Canada when she was a child. Similar to Lane, Paterson had very little formal schooling and was mostly self-educated. She left home as a teenager to find work, taking a series of low-paying jobs, including one as a secretary to the publisher of a Washington newspaper who discovered her writing talent. From there her career took off.

In 1924, Paterson began writing a prominent literary column for the New York Herald Tribune, a position she held for 25 years where she emphasized libertarian themes. She was opposed to Prohibition, military conscription, government schooling, and crony capitalism. She favored free trade and immigration and was against the New Deal and central planning. Paterson defended free-market capitalism and celebrated entrepreneurship and invention. She became a US citizen in 1928 at age 42.

In 1943, Paterson published her pivotal book, The God of the Machine, that fully articulated her libertarian vision of personal and economic freedom and showed how statist policies can stifle human energy. “Capitalism is the economic system of individualism,” writes Paterson. She goes on to explain that “it was assumed by superficial minds, such as Marx, that capitalism tended to concentration of wealth and a ‘class’ division of interests. But the ‘interest’ of capitalism is distribution. All the inventions of man have individualism as their end, because they spring from the individual function of intelligence, which is the creative and productive source. Freedom being the natural condition of man, inventions making for greater mobility resolve into individual means of transport. So far as co-operative action is useful toward the development of the individual, capitalism is fully able to carry out by voluntary association vast and complex operations of which collectivism is utterly incapable, and which are self-liquidating at the limit of their usefulness, if they are allowed to complete the process. No collectivist society can even permit co-operation; it relies upon compulsion; hence it remains static.”

Rose Wilder Lane, who was friendly with former president Herbert Hoover, wrote to him in praise of Paterson’s book: “I try to restrain my enthusiasm, but it seems to me a book ranking with the best of Paine and Madison,” she said. Ayn Rand, the third of the “Libertarians of ‘43” also celebrated Paterson’s book. Rand wrote: “The God of the Machine is a document that could literally save the world … The God of the Machine does for capitalism what Das Kapital does for the Reds and what the Bible did for Christianity.” Paterson, in turn, eagerly endorsed Rand’s 1943 novel, The Fountainhead, in her literary column.

Born in Russia in 1905, Rand lived through the Russian Revolution of 1917 when she saw her father’s pharmacy business in Petrograd confiscated by the state. The family escaped to the Crimean Peninsula where Rand attended high school. They returned to Petrograd in 1921, living through the Great Famine when they suffered from periodic starvation and millions of Russians perished. Rand was issued a visa to visit the US and arrived in New York City in 1926 at the age of 21, changing her name from Alissa Rosenbaum to Ayn Rand. She became a US citizen in 1931.

Rand’s childhood experiences revealed to her the evils of collectivist ideology and the doctrine of “altruism,” shaping her views in favor of individualism and the doctrine of “egoism.” The Fountainhead, along with her later magnum opus Atlas Shrugged, eloquently and entertainingly articulate her philosophy of “man as a heroic being with his own happiness as the moral purpose of his life, with productive achievement as his noblest activity, and reason as his only absolute.”

In The Fountainhead, Rand’s main character Howard Roark explains the virtues of egoism and individual achievement more clearly: “Men have been taught that the highest virtue is not to achieve, but to give. Yet one cannot give that which has not been created. Creation comes before distribution—or there will be nothing to distribute. The need of the creator comes before the need of any possible beneficiary. Yet we are taught to admire the second-hander who dispenses gifts he has not produced above the man who made the gifts possible. We praise an act of charity. We shrug at an act of achievement.”

Rand became known as a “radical for capitalism,” explaining that capitalism is the only political and economic system that recognizes and respects individual rights. In her 1966 book, Capitalism: The Unknown Ideal, Rand writes: “Capitalism was the only system in history where wealth was not acquired by looting, but by production, not by force, but by trade, the only system that stood for man’s right to his own mind, to his work, to his life, to his happiness, to himself.”

For Lane, Paterson and Rand, 1943 was a lonely time with only a small group of libertarian thinkers denouncing the collectivist policies and socialist ideology that the elites applauded. Their courage and conviction set the foundation for a renewed commitment to American ideals of individualism and opportunity, restrained government, free enterprise, and entrepreneurship. As the journalist John Chamberlain once said: “Indeed, it was three women — [Isabel] Paterson, Rose Wilder Lane, and Ayn Rand — who, with scornful side glances at the male business community, had decided to rekindle a faith in an older American philosophy.”

Today, there are thankfully more of us who recognize and relay the principles of a free society, and there are more organizations that support these efforts, including FEE which celebrates its 75th anniversary this year.

At a time when individual rights have been relentlessly eroded due to lockdowns, economic freedom has been crushed for many of the small businesses deemed “non-essential,” and government has swelled while spending reaches unfathomable heights, the words and warnings of these three libertarian pioneers are more important than ever. Today’s libertarians have a crucial role to play in continuing to champion individualism over collectivism.

As Rand reminds us in Atlas Shrugged, we can each create the world we desire: “Do not let your fire go out, spark by irreplaceable spark, in the hopeless swamps of the approximate, the not-quite, the not-yet, the not-at-all. Do not let the hero in your soul perish in lonely frustration for the life you deserved, but have never been able to reach. Check your road and the nature of your battle. The world you desire can be won, it exists, it is real, it is possible, it’s yours.”

If you are an emerging writer with a passion for liberty and free-market economics, check out FEE’s Hazlitt Fellowship and be part of a new generation of libertarian writers.