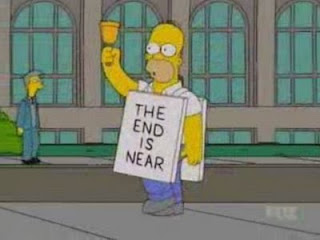 The editorial board at Issues and Insights published this earlier today:

John Kerry said earlier this month that we’ve reached “the last best opportunity we have to get real and serious” about global warming. What’s the difference between him and a loon walking down Manhattan’s Fifth Avenue wearing one of those sandwich boards proclaiming the end of the world is nigh? We’re struggling to see any.

Kerry, the Biden administration’s special presidential envoy for climate – an office that amounts to much less than a bucket of warm spit – is part of a chorus of fearmongering that goes back more than three decades.

“In 1989 the United Nations gave us 10 years to save the world,” science site Watts Up With That posted last year.

Guess blogger Eric Worrall then went on to list more than a dozen “last chances” to stop global warming.

“If we do not heed this last chance, I’m sure there will be another last chance in the near future, just like all the previous last chances,” he said.

Dire, way-off-base predictions have been the hallmark of radical environmentalism for at least a half century. Reason’s Ronald Bailey took “a look back” in 2020 at the first Earth Day and the forecasters “who got the future wrong.” He notes that the world did not have to halve the planet’s population or stop economic growth completely “to prevent the imminent ecological cataclysm.”

Nor have we run out of natural resources, been forced to shut down automobile travel, ban luxury items, and wear gas masks in urban areas due to air pollution (though the doomsters among us are happy that we’ve been forced to mask up for a least a year for another reason).

Despite the unbroken string of erroneous predictions, we still get nonsense from the United Nations World Meteorological Organization, which says “time is fast running out” to keep global warming at bay, and drivel from U.N. Secretary-General António Guterres, who insists “we are on the verge of the abyss.”

That these people, including the John Kerrys of the U.S., who are as useful as a broken leg, have not been driven from their positions of influence and authority is a near tragedy. To the extent that we need political leaders, our country and our world deserve serious, sober-minded people leading our institutions, not the pretenders, narrative-pimps, self-seekers, virtue-signalers, mindless agitators, think-they’re-still-in-high-school attention-seekers, power-hungry louts, and batty alarmists who currently dominate. It’s discouraging to think that maybe soon we’ll have our last chance to rid ourselves of these malign characters, because they have a way of settling in like a distant family member who makes a surprise visit and then won’t leave. We need to start kicking them out now.

Monica Showalter at American Thinker quotes John Kerry’s “Net zero is not enough. We need to remove CO2 from the atmosphere”, to which Ms. Showalter responds:

Too bad about the plants.