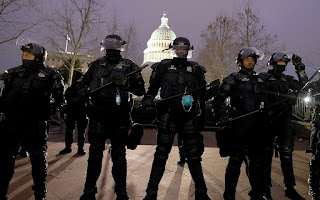 For months, Julie Kelly at American Greatness has been digging and digging into the arrest and detention without due process of protesters at the Capitol on January 6.  It’s worse than we thought.  Much worse.  Here’s a brief extract from Ms. Kelly’s column yesterday:

. . . [Ryan] Nichols’ account is detailed in an appalling new court filing that confirms what American Greatness has reported for months: on January 6, D.C. Metro and Capitol police assaulted nonviolent protesters with explosive devices, rubber bullets, tear gas, and in some cases, their own fists and batons. A tunnel on the lower west side of the Capitol building became a dangerous—and, likely for at least one protester, deadly—battle scene as police viciously attacked American citizens on the “hallowed” grounds of the U.S. Congress.

Nichols, of Texas, has been behind bars since his January 18 arrest; he sits in the D.C. jail specifically used to house January 6 detainees, charged along with Harkrider with multiple offenses including assault of a police officer, civil disorder, and unlawful possession of pepper spray.

So, what on Earth turned two decorated veterans with a history of helping people in crisis into “insurrectionists” who attacked police officers? It was what they saw when they approached the tunnel around 3 p.m. on January 6. “They hear people screaming in pain and crying for help—women and old men are bloodied and injured,” McBride wrote in a motion seeking Nichols’ release. “Training and instincts kick in and they head to the tunnel, wondering if an accident had happened and if other people were even more seriously injured.”

McBride viewed three hours of surveillance video captured by Capitol security camera—the extensive system captured at least 14,000 hours of footage that the Justice Department and Capitol police are desperate to keep away from public view—and described for the first time what happened inside the tunnel where a combination of D.C. and Capitol police, ostensibly, were stationed to prevent protesters from entering the building:

“[Just] after 4:00 pm, Ryan is sprayed multiple times by an officer standing on a ledge in the tunnel,” McBride wrote in a November 1 filing. “He is also separated from a woman who stood next to Ryan at different times at the Western Terrace. She was middle aged and nice. Ryan promised to keep an eye on her. The woman was wearing a red shirt and a MAGA hat. Shortly thereafter, officers begin terrorizing people in and around the tunnel. People are screaming and getting crushed. There is a pile of human beings stacked on top of each other at the tunnel entrance. People are trapped and there is nowhere to go.”

McBride focused on the conduct of one officer in particular, with badge number L359 and wearing a white shirt. The unidentified officer begins “to beat a man for no apparent reason . . . [and] beats the man so badly that the man crawls over to the woman with the MAGA hat.” . . .

Much more here.  One reader comment suggested printing out the column and sending it to your representative in the House to ask what he/she can do.