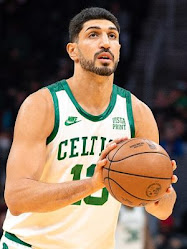 Enes Kanter Freedom is a professional basketball player for the Boston Celtics.  He just published a piece in, of all places, The Atlantic.  Excerpts are below.  His statement will bring tears to your eyes;  he understands what America is all about, and he puts LeBron to shame.  Highly recommended!

When I first arrived in the United States, I had to adjust to a new language, new norms, and new traditions. But I was perhaps most stunned by a simple comment a teammate made. He criticized President Barack Obama, which I feared could have landed him in prison. He smiled and said: “This isn’t Turkey, brother. You have the freedom to say whatever you want.”

Americans might find the thought absurd, but the threat of prison is all too real for those living under authoritarian rule around the world. Since Recep Tayyip Erdoğan became president of Turkey in 2014, after more than a decade as prime minister, at least 12,881 people have been convicted of the crime of insulting the president. Thousands have been sent to prison, including children, for offenses as trivial as posting something on social media that might hurt the feelings of an emotionally fragile dictator.

Over the past five years, Erdoğan has all but stamped out free expression in Turkey. He’s made Turkey one of the world’s worst jailers of journalists, imprisoning hundreds. Erdoğan’s regime has shut down more than 160 media outlets and hundreds of human-rights groups. Turkey’s dystopian new internet law gives the regime complete control over users’ data and enables online censorship. A current proposal would criminalize the spreading of so-called fake news online with up to five years in prison. Erdoğan has targeted every defender of freedom in my country. His regime has persecuted, jailed, and even tortured tens of thousands of educators, lawyers, judges, public officials, and activists after labeling them “terrorists.” And it has targeted me.

Human rights and democracy are under threat. Around the globe, authoritarian strongmen are getting stronger. Yet far too many celebrities, athletes, and corporations still choose their money over their morals. Speaking up for victims of authoritarian violence has somehow become controversial, just because it might alienate the perpetrators. It shouldn’t take the disappearance of a former No. 1 world-tennis star for some of us to make a statement. Freedom is not about staying silent in the face of a tyrannical dictatorship that commits genocide against the Uyghurs because you prefer to preserve your business deals.

I’m overwhelmed with emotion just writing these words: I, Enes Kanter Freedom, am proud to be a citizen of the United States of America, the land of the free, and home of the brave.

Mr. Freedom’s full statement is here.  And it is inspiring.