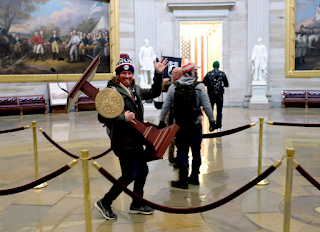 Glenn Greenwald’s article (The Histrionics and Melodrama Around 1/6 Are Laughable, but They Serve Several Key Purposes: As Kamala Harris compares 1/6 to 9/11 and Nancy Pelosi introduces the cast of Hamilton to sing about democracy, today’s inanity should not obscure its dangers.”) is extracted at Instapundit:

The number of people killed by pro-Trump supporters at the January 6 Capitol riot is equal to the number of pro-Trump supporters who brandished guns or knives inside the Capitol. That is the same number as the total of Americans who — after a full year of a Democrat-led DOJ conducting what is heralded as “the most expansive federal law enforcement investigation in US history” — have been charged with inciting insurrection, sedition, treason or conspiracy to overthrow the government as a result of that riot one year ago. Coincidentally, it is the same number as Americans who ended up being criminally charged by the Mueller probe of conspiring with Russia over the 2016 election, and the number of wounds — grave or light — which AOC, who finally emerged at night to assure an on-edge nation that she was “okay” while waiting in an office building away from the riot at the rotunda, sustained on that solemn day.

That number is zero. But just as these rather crucial facts do not prevent the dominant wing of the U.S. corporate media and Democratic Party leaders from continuing to insist that Donald Trump’s 2016 election victory was illegitimate due to his collusion with the Kremlin, it also does not prevent January 6 from being widely described in those same circles as an Insurrection, an attempted coup, an event as traumatizing as Pearl Harbor (2,403 dead) or the 9/11 attack (2,977 dead), and as the gravest attack on American democracy since the mid-19th Century Civil War (750,000 dead). The Huffington Post’s White House reporter S.V. Date said that it was wrong to compare 1/6 to 9/11, because the former — the three-hour riot at the Capitol — was “1,000 percent worse.”

Indeed, when it comes to melodrama, histrionics, and exploitation of fear levels from the 1/6 riot, there has never been any apparent limit. And today — the one-year anniversary of that three-hour riot — there is no apparent end in sight. Too many political and media elites are far too vested in this maximalist narrative for them to relinquish it voluntarily.

Full article is here via Instapundit.