The Gold Mask of King Tutankhamun
Development of Masks:
·        In the Archaic Period and Old Kingdom, the body was wrapped so as to display the facial features and the separate limbs of the deceased, often modelled in a layer of plaster spread over the bandages.
·        The 1st appearance of masks was in the Old Kingdom. They were made out of cartonnage (Cartonnage is either papyrus or linen covered with a layer of plaster which was then painted or decorated). 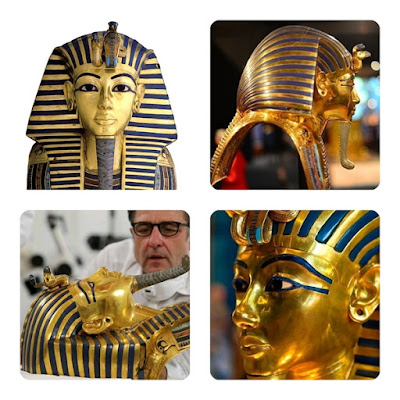 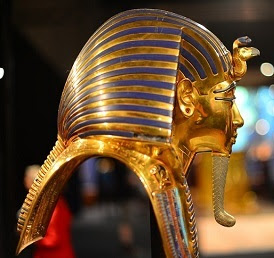 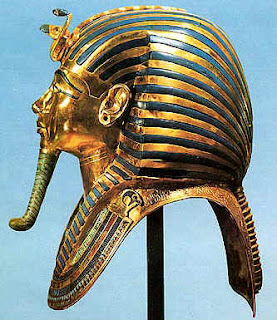 ·        Appearance of the anthropoid coffins in later Middle Kingdom time/ 17th dynasty somehow replaced the use of the masks because the anthropoid coffin itself has the facial features of the deceased already represented but masks were sometimes still used inside the anthropoid coffins.
·        By the New Kingdom, masks were back in fashion as evident from the magnificent mask of Tutankhamen. In the second half of the 18th dynasty, cartonnage masks extended to cover the area below the chest. Then from the 19th to the early 22nd dynasty full-length cartonnage masks or better known as cages or covers appeared. These extensions were sometimes referred to as mummy boards.
·         By the Saite period (26th dynasty) the main adornment of the mummy was in the form of bead-netting over the mummy shrouds to which a small mask of cartonnage, wood or beads was often added.
·        In the middle of the Ptolemaic period, ordinary masks reappeared and continued to be used into the Roman period in addition to the famous mummy portraits.
Importance of Masks
The main importance of using masks:
1) Protecting the head of the mummy from being damaged
2) Preserving the facial features of the deceased to ensure successful resurrection in the afterlife.
The Mask of Tutankhamum:
It was placed directly on the head of the mummy, together with other decorations or trappings such as a golden vertical line of inscriptions and 4 horizontal ones and the golden figure of the Ba bird which was placed on the chest of the mummy, with a big scarab amulet (the heart amulet) inscribed on the other side with Chapter 30B of the Book of the Dead in order to protect the heart of the deceased. 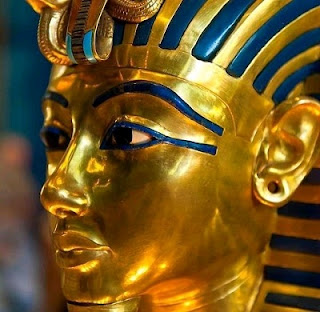 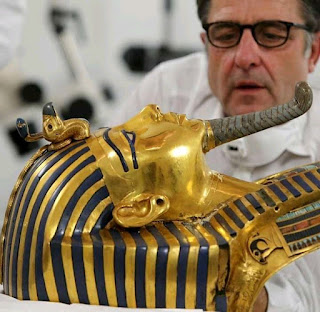 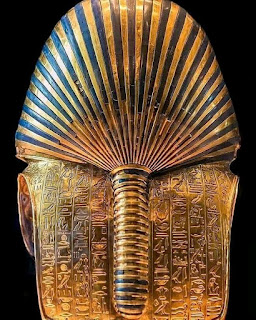 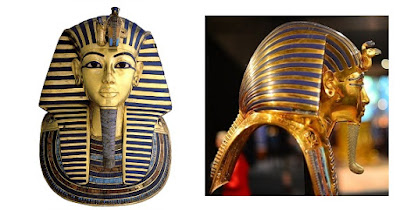 ·        The mask itself is made out of pure gold about 10.23 kg representing the facial features of the king. Tutankhamen is wearing the Nemes headdress, which is striped blue and gold as a sign of association with god Ra (Re’s body was believed to be made out of gold and his hair out of lapis lazuli).
·        The king is represented with a broad collar (wsekh) inlaid with semi-precious stone like Lapis Lazuli (dark blue) and Carnelian (red), Turquoise (light blue) and on either sides of the broad collar  there is a representation of the falcon god (Horus).
·        Upon his forehead, the cobra goddess Wadjet and the vulture goddess Nekhbet are beautifully represented; executed in solid gold and inlaid with precious and semi-precious stones.
·        The facial features of the king show his youth and display vividness of details. He has a serene faraway look confirming his royalty or, according to some scholars, indicating his confidence that he’ll gain victory upon death. The eyes are inlaid with obsidian (for the pupils) and opaque quartze for the white. The earlobes are pierced showing the effect of Amarna art. There is also a turned up false beard made out of lapis lazuli as a sign of identification with god Re.
·        At the back of the mask the hieroglyphic inscriptions represent spell no 151B of the Book of the Dead. This spell identifies each specific part of the face with a certain deity or religious figure in order to guarantee the ultimate protection:
(1)    The forehead is identified with god Anubis.
(2)    The lock of hair and the beard with god Rc
(3)    The nape of the neck with god Horus
(4)    The right eye with the night bark of Rc (msktt)
(5)    The left eye with the day bark of Rc (manDt)
(Regarding no 4 and 5 the explanation is that they provide a kind of protection because the journey of god Ra inside his boats was a very important religious symbol for the deceased).