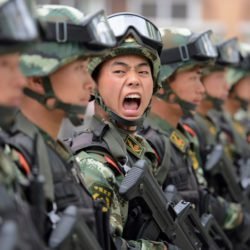 The 2022 Index of U.S. Military Strength, produced by the Heritage Foundation, found that the United States military was significantly declining in its ability to perform its missions, as China presents a major challenge to the continued military effectiveness of the United States.

“China is the most comprehensive threat the US faces,” the report reads. “As currently postured, the US military continues to be only marginally able to meet the demands of defending America’s vital national interests.”

The report ranked China as a “formidable” threat, the highest threat ranking, and found that the US military – in all branches – required more hard assets to successfully carry out their missions in the event of a war.

Rep. Mike Rogers (R-AL), the ranking member of the House Armed Services Committee, said, “We’ve been through two decades of war, and we’ve worn everything we’ve got out, including manpower…China is in the middle of an unprecedented military modernization. I fear they’ll leapfrog us in many advanced technologies like AI and quantum computing. We know they’ve done so with hypersonics.”

Rogers cited grave his concerns with China’s test of a nuclear-capable hypersonic glide vehicle last August, apparently carried out unbeknownst to the US intelligence community.

The defense of the nation and the rights of the people are more important than any other subject facing the United States today. All of the activist and theory-based crap that our elected officials are obsessed with, all of the deficit spending, even infrastructure as a federal purview, are all secondary to the defense of the nation and the protection of the Natural Law rights every American has guaranteed to them as a citizen.

Yet, as China eclipses our military capability in its quest to reign as the world’s dominant power, our elected idiots in Washington DC thought it important to sanction an International Pronouns Day through the State Department. They think it is more pressing to target parents in their objection to Critical Race Theory. They insist that continuing to hobble our economy under the guise of an all-but-finished pandemic (how many countries are done with it all now?) by mandating vaccinations to the point of firing nurses is all-important, and more important than being able to repel attacks from violent nation-states.

How are we – the American people – allowing these intellectually stunted political and ideological opportunists to debilitate our defenses and to whittle away at our rights without taking to the streets, torches and pitchforks in hand?!

It is time that we, as a people, start getting very ideologically aggressive with the Woke community for it it is they who have delivered us to the point where China can kick our asses and take our stuff.

The Woke suck. The Woke have no clue. The Woke support all of the touchy-feely, activist, ideological bullsh*t that has us now staring down the barrel of a gun made in China. And history – which does repeat itself – will see them as the first ones dispatched under the new Communist States of America.